Heavy overnight rain and thunderstorms in the Netherlands threatened to affect the second day of play in the ongoing qualifiers but the rain cleared up and the covers held to ensure all matches started on time. 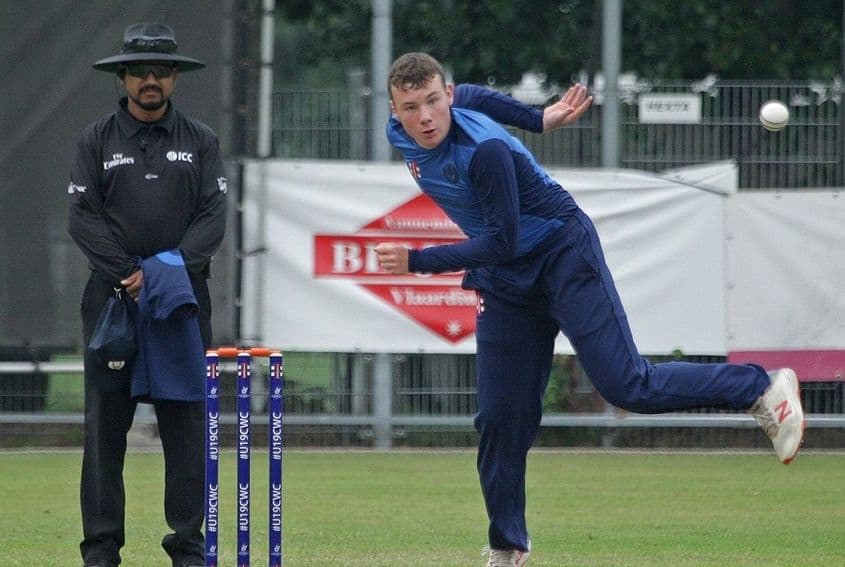 Ireland and Scotland occupy the top two positions in the points table with two wins each from as many games in the International Cricket Council (ICC) Under-19 Cricket World Cup Europe Qualifier 2019.

Heavy overnight rain and thunderstorms in the Netherlands threatened to affect the second day of play in the ongoing qualifiers but the rain cleared up and the covers held to ensure all matches started on time.

In Rotterdam, Ireland won the toss and chose to bat against Denmark to continue their good form. Opener Nathan McGuire (105 runs) quickly adapted to the conditions and hit 16 boundaries on his way to a century inside 36 overs. Denmark fought back with regular wickets but could not prevent the Ireland side from reaching an imposing 278 for six wickets. A late onslaught from Tim Tector, who hit an unbeaten 54 from just 39 balls, contributed to the highest total so far in the event.

Denmark showed positive intent early in the reply, with the second ball of the innings sailing over the boundary for six. However, the disciplined Ireland side got their revenge next ball with a wicket. The Ireland bowlers kept the pressure on the Denmark batters, keeping the scoring rate low and taking wickets at regular intervals.

Ireland spinner Mitchell Thompson struck four times on a turning wicket, taking the momentum out of the Denmark chase. Nathan McGuire (2-46/10) completed his all-round performance for Ireland with two wickets to his name. Jonathan Garth (2-22/8) and Jamie Forbes (2-18/6.5) both contributed with two wickets each in their economical spells. Denmark found themselves stranded on 146 all out with 44 overs, a long way off the Ireland target.

In Voorburg, hosts the Netherlands came out with a point to prove against France, after the narrow loss against Scotland the day before. Winning the toss and choosing to bat, the Dutch were initially cautious in overcast conditions, keen to see off the new ball and mindful of the swing in the first hour of play.

Left-handed opener Vikramjit Singh (133 runs) backed up his half-century against Scotland with a fine century against France, working the ball around for singles and twos, occasionally unleashing powerful shots down the ground as he batted with increasing confidence. Shirase Rasool (34 runs) and Kevin van der Geest (47 runs) made contributions at the other end in partnerships worth 80 runs and 141 runs respectively.

A late flurry of wickets in the last two overs boosted the confidence of the France fielders, but could not prevent the Netherlands score from reaching an imposing 266 for 7.

France batted with patience to see off the first 10 overs, but it was the introduction of the spin bowlers after the conclusion of the power play that turned the screws on the French batters. Leg-spinner Phillipe Boissevain conceded just 3 runs in his 4 over spell, while off-spinners Pierre Jacod (5-14/9) and Aryan Dutt (4-15/3.5) combined for a destructive spell of bowling. With the score on 50 in the 25th over, a collapse ensued to take France from 50/4 to 50/9 in the space of eight balls. Some enterprising shots from the France lower order took the score to 60 before the final wicket fell, giving the Netherlands a substantial 206 run victory.

On the fields of Excelsior ’20 in Schiedam, Jersey chose to field after winning the toss against Scotland. The early wicket of Scotland Captain Angus Guy boosted the Jersey boys, however, Tomas Mackintosh (79 runs) continued his good form in the tournament hitting his second half-century in two days and combining with opener Syed Shah (35 runs) in a 93-run partnership to set Scotland up for a big total. Chris Carnegie bowled another good spell for the Jersey side, taking two wickets for 31 runs from his allocation. Middle-order batsman Liam Naylor pushed his side’s total to 233 with a quickfire unbeaten 53 from 46 balls late in the innings.

Jersey struggled in the reply, losing early wickets and finding it hard to pierce the gaps in the field. Josh Lawrenson (52 runs) attempted to hold his side’s innings together with a patient half century but was ultimately undone by a ruthless spell of bowling by Charlie Peet (7-12/10). The Scotland spinner was practically unplayable on a turning pitch, conceding just 12 runs for a phenomenal seven wicket haul to take his side to their second victory in the tournament.