England remain in the second position in the ICC Women’s T20I Team Rankings while Pakistan are standing at the seventh spot. 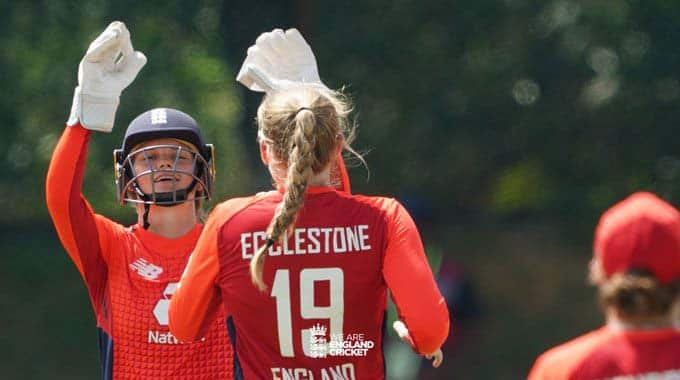 Ecclestone, who grabbed six wickets including a haul of three for 21 in the first match, has gained three slots to finish in the fourth position, thus becoming the first England bowler to tally more than 700 rating points since Anya Shrubsole in 2016.

The left-arm spinner is on 727 rating points while her previous best was 703 in January this year. Her career-best ranking of third was achieved in February.

Wicketkeeper-batwoman Amy Jones was declared ‘Player of the Series’ for finishing with 179 runs in the series, which was more than double of what any other batter could manage. The efforts saw her move up by 30 places to achieve a career-best 17th position. Her previous best was 38th in June this year.

Besides the duo, Danielle Wyatt (up two places to a career-best 12th), Tammy Beaumont (up two places to 21st) and Heather Knight (up one place to 34th) have also made significant gains in rankings for batters. The list though continues to be led by New Zealand’s Suzie Bates, who remained at the top through the year.

Among their bowlers, Natalie Sciver has gained five places to reach 35th position while Freya Davis has gained 35 places and is now 91st in the list.

For Pakistan, batwoman Umaima Sohail has advanced five places to reach 59th position while seamer Diana Baig has climbed up by 16 slots to reach a career-best 47th position in the list led by Australia fast bowler Megan Schutt. Her previous best was 63rd place in January this year.

England remain in the second position in the ICC Women’s T20I Team Rankings while Pakistan are standing at the seventh spot.