Faf du Plessis admits South Africa must rip up their existing blueprint if they are to get their ICC Men’s Cricket World Cup campaign back on track. 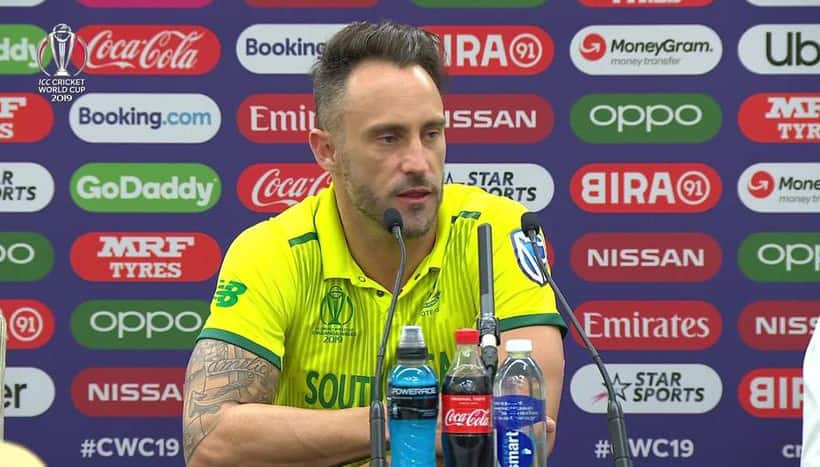 Faf du Plessis admits South Africa must rip up their existing blueprint if they are to get their ICC Men’s Cricket World Cup campaign back on track.

As per the ICC media press release, soundly beaten by favorites England in the tournament opener, the Proteas’ disappointing start to the World Cup continued on Sunday as they slumped to a 21-run defeat against Bangladesh at The Oval.

Shorn of star bowler Dale Steyn, South Africa saw their usually potent bowling attack blunted by a fine batting display from the Tigers, with Soumya Sarkar particularly destructive at the top of the order.

With Steyn still touch-and-go for Wednesday’s match with India and Lungi Ngidi picking up a hamstring strain, injuries could well force a change in approach.

“I’m extremely disappointed,” said Du Plessis. “Gutted to say that all formats of our game are just not firing at the moment. To blame bad luck is not an option for me.

“Our plan was to try in both the England game and this game, try and make sure that we target them with aggressive bowling.

“Plan A is gone because Plan A was those main bowlers playing together.

“They haven't played a game together on this tour. Initially, Plan B was Anrich Nortje as an extra pace bowler that we had lined up for if we had an injury, to have another X-factor bowler that can bowl 145kmh-plus. He got injured, as well.

“If Anrich was here, you could say, ‘listen Dale, it's getting to that time now where you need to play or we need to substitute you.’ But now we have got two or three down.

“So now you're moving into your all-rounder territory. You have two medium pace all-rounders and then you have Chris Morris that sits in between your fast bowlers and your medium pace bowlers.

“So now we have to really look at what we can do to try to be effective; is it playing all-rounders together, do we play two spinners?

“Now it's reshuffling all our cards and see how best we can deal with it.”

Without a win from their opening two games, South Africa face 1983 and 2011 champions India next up as they look to belatedly get up and running in the competition.

Facing Virat Kohli’s fancied side is a daunting prospect for any team, but Du Plessis insists he will not stop believing that South Africa can turn things around.

“I have to believe that. I wouldn't be South African if I said no,” he added.

“Every single player in our dressing room is not playing to their full potential, and that's why we're not putting the performances in. As soon as that starts happening, then those things will change.

“I'll go back and try and see how we can lift the spirits in the team.

“We're playing a strong team in India, and as a team, we know we're not good enough at the moment and we have to turn it around.

“International cricket is not like ‘here you go, there's a win for you.’

“The World Cup is set up with strong teams. We won't be going back and just falling over, I can promise you that.”

Youth and experience the key for Bangladesh's success at World Cup 2019: Mehidy Hasan