England reached the final of the Cricket World Cup for the first time since 1992. 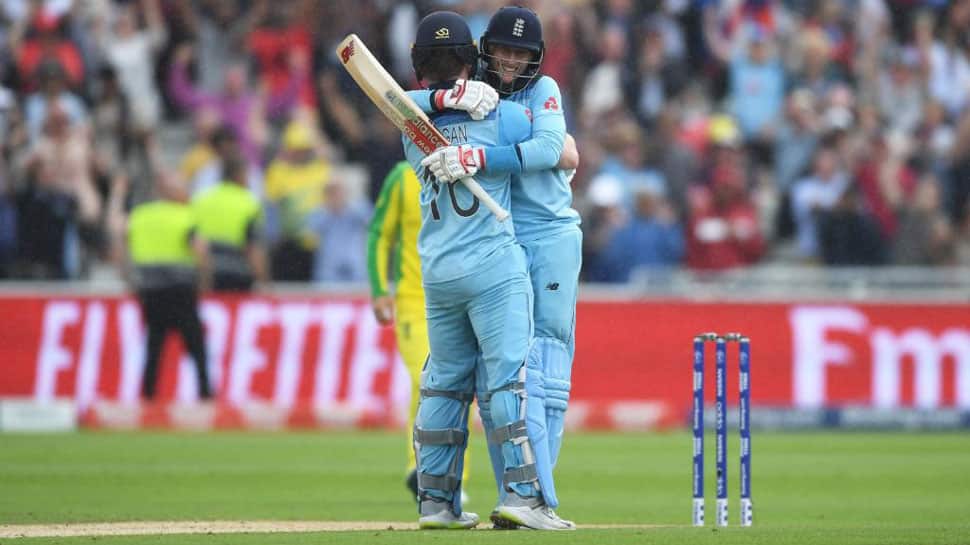 England are set to face off against New Zealand in the final of the ICC Cricket World Cup 2019 following victory by a margin of eight wickets against Australia in the second semi-final of the tournament at Edgbaston, Birmingham on Thursday.

Steve Smith and wicket-keeper batsman Alex Carey went about rebuilding the innings in this tense scenario, stitching a partnership of 103 runs. However, Carey's dismissal led to another collapse as all-rounders Marcus Stoinis and Glenn Maxwell were dismissed cheaply.

A late 51-run partnership between Steve Smith and Mitchell Starc helped Australia cross the 200-run mark. However, the dismissal of the duo off consecutive deliveries saw Australia being soon bowled out for 223.

In reply, English openers Jonny Bairstow and Jason Roy stitched a partnership of 124 runs, to put the hosts in a dominant position. Skipper Eoin Morgan and Joe Root continued to attack following the dismissal of the duo with an unbeaten partnership of 79 runs, as England chased down the target in 32.1 overs.

# England reached the final of the Cricket World Cup for the first time since 1992.

# English openers Jonny Bairstow and Jason Roy registered a partnership in excess of 100 runs for the 11th time in ODIs.

# Australia were defeated for the first time in a World Cup first semi-final in eight appearances.

# England defeated Australia in a Cricket World Cup clash for the first time since the 1992 edition of the tournament.

# England have registered wins in each of their 11 matches in International cricket at Edgbaston so far, a streak comprising of five ODIs.

# Mitchell Starc (27) surpassed Glenn McGrath's (26) record of picking the most wickets in a World Cup edition, after accounting for the dismissal of Jonny Bairstow.

# Australia have not emerged victorious in an International match at Edgbaston since 2001, which continues with the defeat against England.

# Australia have lost 26 wickets in the death overs while batting first which is the most for a team in the Cricket World Cup 2019.

# Joe Root has completed 12 catches in the outfield in the Cricket World Cup 2019 which is the highest by a fielder in any edition of the World Cup.