IND vs ENG: 'Focus on present series and not at World Test Championship', says Ajinkya Rahane

Ajinkya Rahane said that the team is not looking at the World Test Championship (WTC) final at the moment and the focus is entirely on the upcoming series. The right-handed batsman also ruled out any sort of complacency among his teammates, and added that the triumph in Australia was special but it is past now. 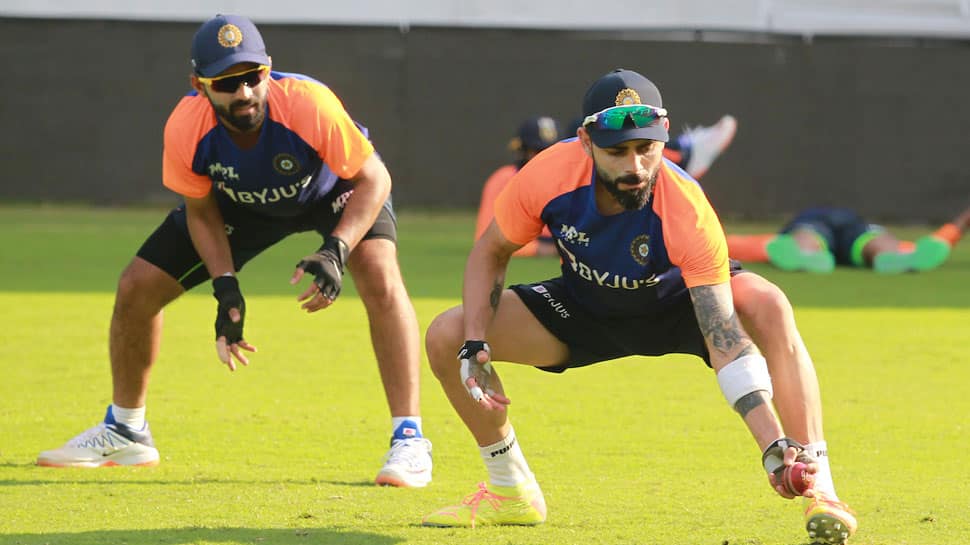 India skipper Virat Kohli along with his deputy Ajinkya Rahane during the nets ahead of the first Test against England in Chennai. (Twitter/BCCI)
Share:
Written By:

Weeks after completing a historic triumph over Australia, Virat Kohli and his boys are gearing up for another exciting challenge against England. Both the parties are scheduled to lock horns in a four-match Test series, starting from February 5 in Chennai, the outcome of which will determine India's qualification at the World Test Championship (WTC) finals, slated to be held at Lords in June this year.

However, Ajinkya Rahane, Kohli's deputy in the red-ball format, said that the team is not looking at the World Test Championship (WTC) final at the moment and the focus is entirely on the upcoming series. The right-handed batsman, who was at the forefront in the India's victory in the recently-concluded Border-Gavaskar series, also ruled out any sort of complacency among his teammates, and added that the triumph in Australia was special but it is past now.

"Australia is past. We are in present. I don't think we have to think too much about complacency or any other (thing), we know that what's our strength and we know how the Indian wickets (pitches) behave. We respect the England side which has won a Test series in Sri Lanka. We want to play good brand of cricket and we are not taking anything for granted," the 32-year-old cricketer said during a virtual media conference on Wednesday.

"The WTC final is three-four (five) months from now. The focus should be on present series. New Zealand played really well and deserved to be in the final. For us, it will be about taking one game at a time," he added.

My job becomes easy when @imVkohli is around: @ajinkyarahane88

Meanwhile, the series will also see Kohli returning back in action following his paternity leave. The India skipper had returned to India after the eight-wicket drubbing in Adelaide. In Kohli's absence, Rahane held the team's helm and guided a second-string Indian unit to a thrilling series win in Australia. The 32-year-old, however, feels the return of Indian skipper will make his job easier.

"My job is to take a back seat and help Virat. You know as a captain, there are too many things in captain's mind, so as a vice-captain, you have to visualise the situation, think about what can happen in the game and then if captain asks you some suggestions, you should be ready so my job is really easy," Rahane said.

'External forces can be spectators but not participants': Sachin Tendulkar hits back at Rihanna