India registered their seventh straight Test win and became the first side ever to complete four successive innings wins in Test cricket. 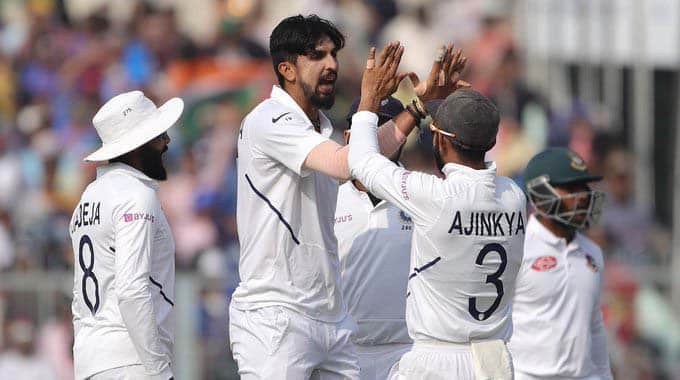 Umesh Yadav bagged a five-wicket haul while Ishant Sharma well-supported him with four wickets as India bundled out Bangladesh for 195 in their second innings to secure a massive win by an innings and 46 runs on the third day of their first-ever Day-Night Pink Ball Test at the iconic Eden Gardens in Kolkata on Sunday.

India win by an innings and 46 runs in the #PinkBallTest

India become the first team to win four Tests in a row by an innings margin @Paytm #INDvBAN pic.twitter.com/fY50Jh0XsP

Resuming at an overnight score of 152/6 (32.1 overs), Bangladesh batsman Mushfiqur Rahim continued to frustrate the Indian bowlers and kept the hosts series sweep celebrations on ice.

However, Umesh Yadav first removed Ebadat Hossain for a duck before finally giving a sigh of relief to India by removing Mushfiqur for 74.

Yadav then dismissed Al-Amin Hossain (21) on the first delivery of the 42nd over to wrap up Bangladesh's second-innings for 195. Earlier, Mahmudullah was retired hurt for 39 due to a hamstring injury.

Eventually, Umesh finished the innings with the brilliant figures of five for 53 while Ishant Sharma ended with four wickets while conceding 56 runs.

On Saturday, Mushfiqur smashed an unbeaten knock of 59 runs to help Bangladesh delay India's victory in the iconic pink ball match while the wickets at the other end kept tumbling at regular intervals.

Earlier, Indian skipper Kohli (136) not only smashed his 27th Test century but also stitched a crucial 99-run partnership with Ajinkya Rahane (51) for the fourth wicket before India declared their first innings at 347 for nine in reply to Bangladesh's lowly score of 106.

Besides Rahane, Kohli also stitched a crucial 94-run partnership with Cheteshwar Pujara (55) to help India take a 241-run lead in the first innings.

En route to his ton, Kohli also became the first batsman from the country to smash a century in the day-night Test.

For Bangladesh, Al-Amin Hossain and Ebadat Hossain bagged three wickets each, while Abu Jayed and Taijul Islam finished with two and a wicket, respectively.

With the win, India registered their seventh straight Test win and became the first side ever to complete four successive innings wins in Test cricket.

On Friday, top-ranked India became the ninth country to play under lights in the longest format of the game since Australia and New Zealand played the first-ever pink ball match in 2015.