Ishant Sharma and his pace colleagues wreaked havoc with the pink ball to put India in charge of their maiden day-night test against Bangladesh at a heaving Eden Gardens on Friday. 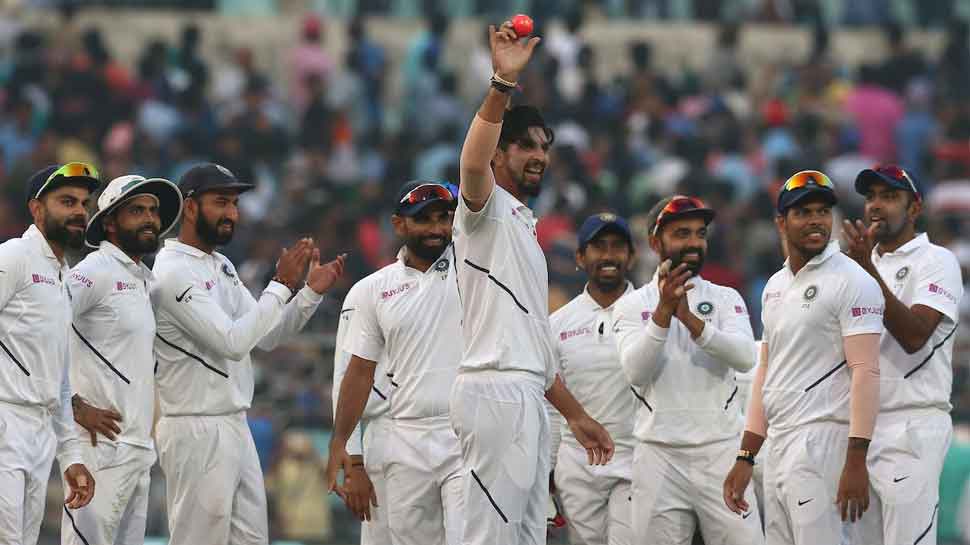 KOLKATA: Ishant Sharma and his pace colleagues wreaked havoc with the pink ball to put India in charge of their maiden day-night test against Bangladesh at a heaving Eden Gardens on Friday.

Armed with the heavily-lacquered ball, India`s three-pronged pace attack bundled out the tourists for 106 in front of a 60,000-strong crowd which included Bangladesh Prime Minister Sheikh Hasina.

Cheteshwar Pujara and Virat Kohli then smashed fifties as India, 1-0 up heading into the second and final match of the two-test series, finished day one on 174-3, to be course for their 12th consecutive home series victory.

Kohli (59 not out) and his deputy Ajinkya Rahane (23 not out) will return on Saturday hoping to bat Bangladesh out of the second and final test and sweep the series. Bangladesh, who were skittled out inside 31 overs, had to call two concussion substitutes after Liton Das and Nayeem Hasan sustained nasty blows to the helmet.

New-ball partner Umesh Yadav (3-29) immediately benefited from a change of ends, dismissing Mominul and Mohammad Mithun in the same over to trigger a spectacular batting collapse.

Opener Shadman Islam topscored for Bangladesh with 29, while Liton retired hurt on 24 after being hit on the helmet by a Mohammed Shami delivery.

Both Mehidy and Taijul were dropped in the two changes to their playing XI earlier in the day. Indian openers looked at ease against the pink ball but neither Mayank Agarwal (14) nor Rohit Sharma (21) could convert their starts.

Pujara made 55 before edging Ebadot Hossain, who unfurled his second salute celebration, but Kohli went on to complete 5,000 runs as test captain.