In Kohli's absence, the Men in Blue's regular vice-captain Rohit Sharma will lead the side in the remaining ODIs against New Zealand. 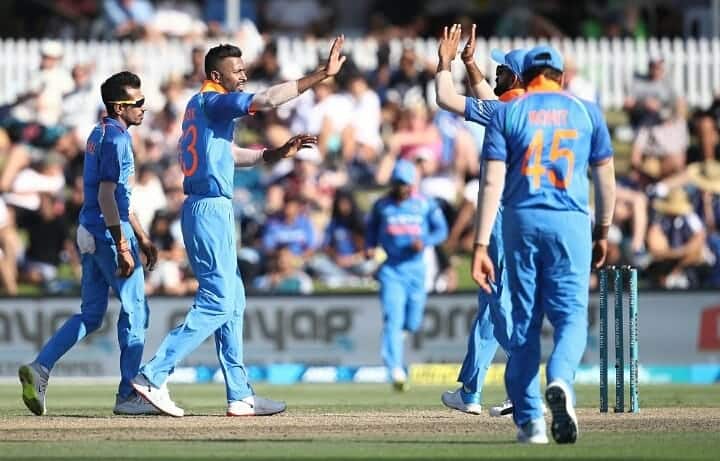 With India already taken an unassailable 3-0 lead in the five-match ODI series against New Zealand, fielding coach R Sridhar believes that it is now an ideal time for the team to try out some reserves and give them game-time ahead of the 2019 ICC World Cup in England and Wales in May.

The Men in Blue produced an all-round performance to beat the Black Caps by seven wickets in the third ODI at Bay Oval and clinch the series with two games to spare.

Speaking to the reporters on the eve of the dead-rubber fourth ODI against the Kane Williamson-led side, Sridhar admitted that though India would like to continue their winning habit in the upcoming matches, they want to give their reserves enough game time with just seven matches remaining before the prestigious event.

"See, winning is a habit which we would obviously want to continue. When you are up by 1-0 or 3-0 against a team, you want to continue with the form. You do not want to let down the intensity. At the same time, we also need to give game-time to our reserves. There are just seven games remaining for us before we play our first World Cup game. We should not end up in a situation where the main XI has played and the reserves have not got enough game time and then they suddenly have to play an important crucial game in the World Cup. So, we want to give them enough game time as well. And that is what the team management will be thinking about I am sure and that is what we would like to achieve in the remaining two games of this series," Sridhar told.

Despite outclassing New Zealand in all the departments in the opening three matches, Sridhar refused to take the Black Caps lightly and said that India are expecting a good competition from the number three team in the world in the World Cup.

"They are number three team in the world. When we came here, we came here with a lot of respect for the Black Caps because we know what they can do. They came in India four months back and gave us a good run for the money.  They made us hands down in the Mumbai game ..and in the last game, the decider, we just managed to hang on by five or six runs in Kanpur. And in the T20Is, it was the same. We know how good the team BlackCaps are in the world cricket. So, we were prepared for that and we were also prepared to put up our best foot forward. By no means, the Black Caps are the poor side. They are a fabulous cricket team. They will always be punching above their weight when it comes to the ICC tournaments and we expect them to do it in the next three months as well which is in World Cup," he pointed out.

The fielding coach was also full of praise for Hardik Pandya, who made a superb return to the side in the third ODI after teh Committee of Administrators (CoA) revoked its provisional suspension on him for his recent racist comments during a celebrity talk show.

"No one was more keen than Hardik Pandya to play that game and he has been working very hard during the time he got back home and the kind of energy that he brought into the team, the desperation he brought was magnificent to see. He has always been a good fielder and he was just dying to get into the thick of things and be a part of this and get back to what he loves doing, that is to play cricket and play it best he can. So, I think it was a wonderful opportunity for him," he said.

Pandya finished with the figures of two for 45 runs beside also taking a superb catch of New Zealand skipper Kane Williamson off Yuzvendra Chahal's short delivery on middle stump.

Describing Pandya as 'one of the best fielders of the country', Sridhar stressed that Williamson's catch was quite a difficult one, but he made it look very easy.

"That catch. He made a very difficult catch look easy. By no means an easy catch and then also the fact that it was Kane Williamson's catch, the extra pleasure of one of the best batsmen in the world. I think that was a turning point. I would say a piece of magic from Hardik Pandya and he is known for that. He is one of the best fielders as we have in the country. If you also notice, he hit the stumps on quite a few occasions on his comeback matches, which was very pleasing to see. Hardik brings a lot to the team, not only the balance but also other factors.  He is very welcome to watch," the Indian fielding coach said.

India will head into the fourth ODI without their star captain Virat Kohli, who has been rested for the remaining ODIs and three-match T20I series that follows as part of the Board of Control for Cricket in India's (BCCI) workload management.

In his absence, the Men in Blue's regular vice-captain Rohit Sharma will lead the side in the remaining ODIs against New Zealand.