India are currently standing at the second position in the 2019 ICC World Cup points table after winning five out of the six matches they have played so far.

The Virat Kohli-led Indian team will be donning the orange and blue coloured away jersey during their International Cricket Council (ICC) World Cup clash against hosts England at the Edgbaston Cricket Ground in Birmingham on June 30, the official apparel sponsor of the Board of Control for Cricket in India (BCCI) announced on Friday.

"The ODI and Away Kit designs launched this year are inspired by the young new generation of India and the fearless spirit of the national teams," Nike India said while confirming that India will debut its first-ever away kit in Birmingham.

"Similar to the recently launched ODI Kit, the away kit is designed to enhance dynamic movements and modern requirement of the sport and the athletes. While the new engineered mesh and strategically placed sweat zones help enhanced breathability for the team on the field, new placket construction, the flex crest, garment cut angles and slash taping all add to making the new jersey lighter, more breathable and helps the athletes be agile on the field," the statement added. 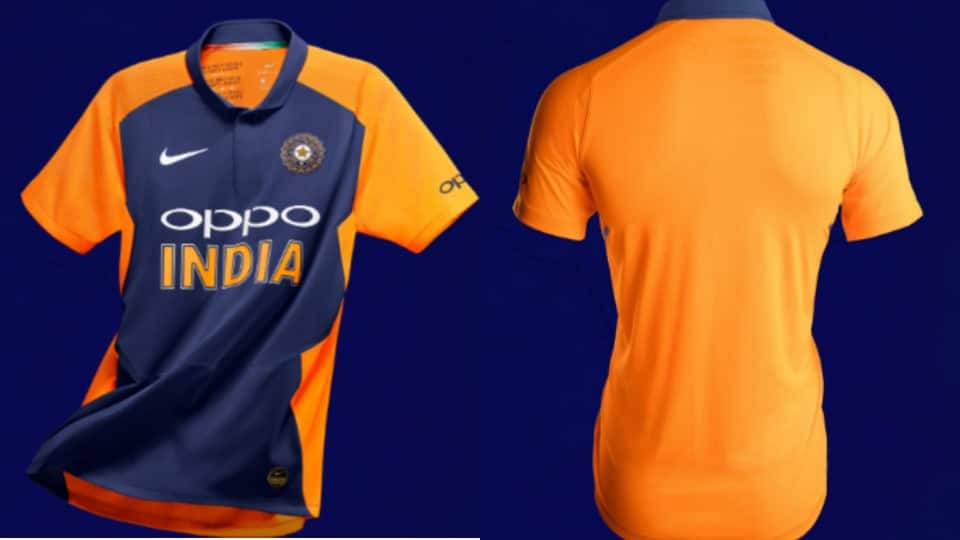 The BCCI too took to their official Twitter handle and shared the picture of the new away jersey, writing, "Presenting #TeamIndia 's Away Jersey. What do you make of this one guys? #TeamIndia #CWC19."

Presenting #TeamIndia's Away Jersey  What do you make of this one guys? #TeamIndia #CWC19 pic.twitter.com/TXLuWhD48Q

It will be for the first time that India will move away from their traditional silhouette to using new innovative cut lines alongside dynamic material combinations to emphasize a multi-dimensional slash design and movement approach.

On Tuesday, the ICC had said that the colour options were given to the BCCI and they chose what they felt went best with the colour combination.

The ICC had also added that the whole idea is to be different as England's jersey also has a similar shade of blue as India. According to ICC, the design of the new jersey has been taken from India’s old T20 jersey which had orange in it.

India are currently standing at the second position in the 2019 ICC World Cup points table after winning five out of the six matches they have played so far. Their clash against New Zealand was abandoned without a ball being bowled due to incessant rain.