Australia thrashed India by 146 runs on day five of the second Test at the Perth Stadium on Tuesday to level the four-match series 1-1. 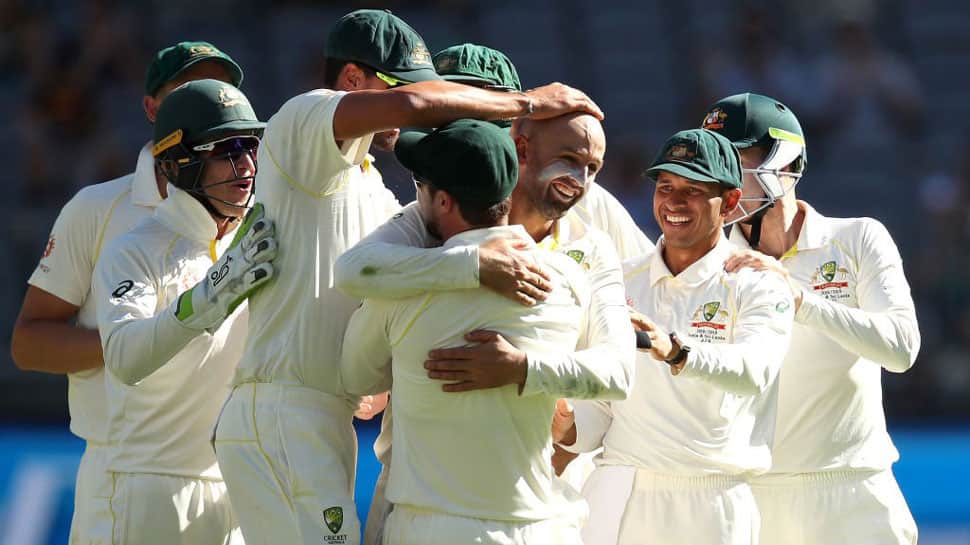 Australia on Tuesday clinched a crushing 146-run win over India on the fifth and the last day of the second Test at the brand new Perth Stadium to level the four-match series 1-1.

Resuming at an overnight score of 112/5, the Indian batsmen failed to counter Australia's bowling attack and fell in quick successions to eventually bundle out for 140 runs in their chase of 287-run target.

Heading into the final day, all eyes were on Hanuma Vihari and Rishabh Pant as they were the only recognised batsman for India present at the crease. However, the duo failed to continue their sixth-wicket partnership and dismissed for 20 and 36, respectively early in the morning sessions.

For Australia, Nathan Lyon was pick of the bowlers for his figures of three for 39, followed by Mitchell Starc's three for 46. Josh Hazlewood (two for 24) and Pat Cummins (two for 25) also made significant contributions with the ball.

The two sides will now lock horns in the third Test, beginning on Boxing Day at the Melbourne Cricket Ground (MCG).

# Lyon has been declared Player of the Match for his match figures of eight for 106.

The GOAT @NathLyon421 is the Player of the Match after eight wickets for the Test in Perth! #AUSvIND pic.twitter.com/tA5xGjqGAy

1-1 going into the Boxing Day Test. It doesn't get much bigger!

AUSSIES WIN! What a Test.

GOT HIM! Cummins gets in on the act now as Ishant edges behind for a duck.

# Pat Cummins comes into the attack. Mohammed Shami is the new batsman for India.

# Wicket! Australia are now on verge to win the second Test and level the four-match series after removing Yadav to reduce India to eight wickets on Day 5. Starc delivers an awkward bouncer to Yadav, who hits the ball in the air to hand an easy return catch to the Australian bowler. India 139/8 (55 overs)

GOT HIM! Short, fast stuff from Starc and Umesh pops up a simple return catch. Gone for 2.

India 8-139 and the Aussies are closing in on victory! #AUSvIND https://t.co/mzWOwn19la

# Ishant Sharma walks down the crease to bat for India!

#Wicket! Lyon strikes again as Australia have got a big wicket of Rishabh Pant, who was the only recognised batsman in the middle at the crease. Pant attempts to heave the ball through the leg side and drags ot in the air towards Peter Handscomb, who dives full length to his left to take a fantastic catch at midwicket. Kohli's men now down by seven wickets. India 137/7 (54 overs)

GOT HIM! What a catch from Handscomb! A blinder hands the GOAT his third wicket of the innings. Pant gone for 30.

# Starc and Lyon continue to remain the attackers with the ball for the hosts as Umesh Yadav seems to be their new target now. Pant, on the other hand, is looking adventurous with his shots as he is hoping to amass as much runs as he can to bring India close to the target. The hosts still need 155 runs to win with just four wickets in hand. India 132/6 (52 overs)

# Umesh Yadav is the new batsman in for India!

#Wicket! Starc makes the much-need breakthrough for Australia this morning by removing Vihari for 28. The ball nips in, gets an edge onto the thigh pad and carries all the way to Marcus Harris, who takes a simple catch at midwicket. India look in trouble now as they are down by six wickets. India 119/6 (47 overs)

GOT HIM! Starc gets the first breakthrough this morning as Vihari edges onto thigh pad and Harris takes a simple catch. Gone for 28.

# Lyon conceded just three runs in three overs he bowled this morning, while Mitchell Starc who joined his teammate into the attack gave away just two runs in his two overs as Australia are trying to pile pressure on the visitors. Meanwhile, Vihari and Pant are batting cautiously as they can't afford to lose one more wicket. India 116/5 (45 overs)

# Hanuma Vihari and Rishabh Pant have walked down the crease to resume India's second innings.Nathan Lyon will begin the proceedings for the hosts.

# The fifth day's play is all set to get underway!

India were reduced to 112/5 by Australia at stumps on the fourth day's play on Monday, still needing 175 more runs to win the second Test of the four-match series at the Perth Stadium.

Chasing a target of 287 runs to win,  the visitors made a worst possible start, losing KL Rahul (duck) and first drop Cheteshwar Pujara (four) cheaply to reduce to 13/2.

Subsequently, skipper Virat Kohli and Murali Vijay joined forces to steady India's ship on a difficult pitch at the Optus stadium. Everything was going fine till 41/2 before Nathan Lyon struck twice to dismiss the duo in quick successions for 17 and 20, respectively.

Ajinkya Rahane and Hanuma Vihari then took the mantle on their shoulders and looked all set to bat on till the end of the day's play. However, Hazlewood struck for Australia in the 35th over to break 43-run partnership between them and sent Rahane packing for 30.

At stumps, Viharia and Rishabh Pant were batting at the crease on their respective score of 24 and nine.

Earlier, resuming at the overnight score of 132/4, Usman Khawaja (72) not only struck his 14th Test half-century but also shared a crucial 72-run partnership with skipper Tim Paine for the sixth wicket to take Australia's lead past 200 before lunch.

However, India finally managed to break their partnership when Mohammed Shami delivered a nasty bouncer in the very first over after lunch to remove Paine for 37. Shami didn't stop their and handed India another wicket by dismissing Aaron Finch, who resumed his innings after being retiired hurt on Sunday, for 25 in the successive ball of the 79th over.

Shami then bagged a big wicket for India in the form of Usman Khawaja (72) in the 83rd over.Pat Cummins (one) and Nathan Lyon (five) were then dismissed in quick succession as Australia were bowled out for 243 runs to set a 287-run target for India.

IPL Auction 2019 Preview: Fate of 351 players on the line as teams go shopping