Australia reached the score of 24-0 at stumps in reply to India's declared first innings score of 622-7 on Day 2 of the series-deciding fourth Test against Australia at the SCG on Friday. 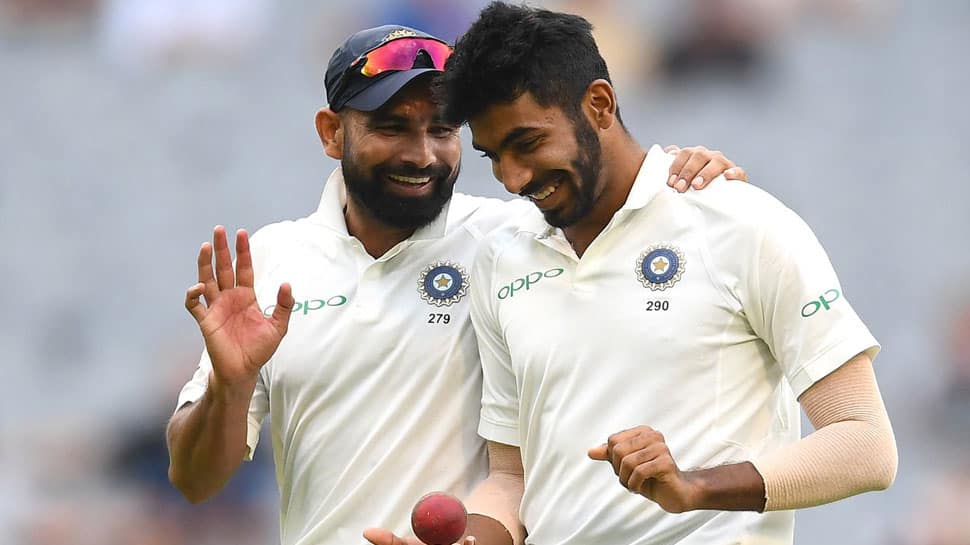 Australia ended the second day's play of the series-deciding fourth Test against India on 24-0 at the Sydney Cricket Ground (SCG) on Monday, still the visitors by 598 runs from their first innings.

At the end of the day's play, openers Marcus Harris and Usman Khawaja were batting at the crease at their respective scores of 19 and five after India declared their first innings at 622-7.

India had a great chance to make the breakthrough as early as in the second over of Australia's first innings when Khawaja edged one off Mohammed Shami's delivery to Rishabh Pant, who missed the catch.

Earlier, resuming at the overnight score of 303-4, Pujara continued his good show with the bat as he not only struck a blistering 193-run knock but also shared crucial partnerships of 101 runs and 89 runs with Hanuma Vihari and Rishabh Pant, respectively to guide India past 400-run mark before eventually falling seven runs short of a double ton.

Many records were broken during India's incredible first innings.

En route to Pujara's epic innings, he broke a 90-year-old record of most deliveries faced by a visiting cricketer in a Test series in Australia.

Pujara batted for more than 1,257 deliveries in the ongoing series to join the list of the Indian batsmen to have faced more than 1,000 deliveries . He has also surpassed Rahul Dravid's record of 1,203 balls faced in 2003-2004 runs.

Pujara had also become the ninth Indian batsman to score 150 runs in an innings Down Under and only the second from the country to bring up a 150-run knock at number third spot in Australia.

Following Pujara's dismissal, Pant notched up his second Test century before crossing the 150-run mark to become only the fourth Indian wicketkeeper to achieve the feat. The Indian wicket-keeper batsman also shared a huge 204-run partnership with Jadeja (81) which is the highest-ever stand for the seventh wicket in Australia.

While Pant remained unbeaten on 158 runs, Jadeja departed for 81 off Nathan Lyon's delivery as India declared their innings at 622/7.

For Australia, Lyon was the pick of the bowlers for his figures of four for 178 while Josh Hazlewood and Mitchell Starc finished wth two and a wicket, respectively.

That's stumps! Khawaja and Harris make it through to stumps, but the day belonged to India once again: https://t.co/CaiEbSjKbT #AUSvIND pic.twitter.com/gfJ0OaVFWM

# India bring Jadeja into the attack!

# India had a great chance to make the breakthrough as early as in the second over of Australia's innings when opener Khawaja went forward to defend Shami's delivery, but got a healthy edge and straight to Pant, who moved across for the catch but eventually missed it. Australia 18/0 (5 overs)

Dropped! Shami finds the edge from Khawaja (0) and Pant puts it down going across to his left in front of first slip.

# Marcus Harris and Usman Khawaja have walked down the crease to begin Australia's innings. Mohammed Shami will begin the proceedings for India.

A wicket! Huge! And a declaration from Kohli. Jadeja is bowled by Lyon for 81 trying to hit one out of the venue. India finish up 7-622.

# Pant crosses the 150-run mark to become only the fourth Indian wicketkeeper to achieve the feat. He reaches the same by scoring a boundary off Josh Hazlewood's delivery in the 166th over. He has also shared a huge 204-run partnership with Jadeja which is the highest-ever stand for the seventh wicket in Australia. India 621/6 (167 overs)

# Jadeja and Pant are playing comfortably at the wicket, with no fightback from the position as India cross 600-run mark in their first innings. While Jadeja (81) is also approching towards a century, Pant is just eight runs away from 150-run mark. India 605/6 (165 overs)

# Jadeja performs his signature sword dance as he brings up his 10th Test half-century off 89 balls. He reches the 50-run mark by taking a single off a Lyon's delivery in the 159th over. Meanwhile, Pant (135*) also continues to stand strong at the crease as the visitors cross 560 runs. India 563/6 (160 overs)

# Despite Pant completing his Test century, India are showing no sign of declaration as they are nearing 500 runs. Meanwhile, Jadeja has also batted confidently so far and is approaching towards his half-century. India 541/6 (156 overs)

# Rishabh Pant continues his good performance with the bat as he brings up his second Test hundred off 141 balls. He reaches the milestone by scoring a boundary off Labuschagne's delivery. With this, he also becomes the first Indian wicketkeeper to score a century Down Under. India 510/6 (150 overs)

CENTURY! A tremendous knock from Pant to bring up his second Test hundred and his first against the Aussies: https://t.co/CaiEbSjKbT #AUSvIND pic.twitter.com/txJzqEpQeJ

# After bringing up his half-century, Pant has started playing more freely. He as well as Jadeja have started going for boundaries. India are now just 19 runs away from touching the score of 500 and they are expected to make a declaration only after Rishabh's century. India 481/6. (143 overs)

# Jadeja made a watchful start to his innings as he is trying to provide his best-possible support to Pant from the other end. The duo is playing cautiously and not trying to notch quick runs as India are looking bat as long as possible and post a 500-run first innings total. India 441/6 (137 overs)

# Rishabh Pant brings up his third Test half-century off 85 balls. He achieved the feat by punching down a Lyon delivery past short mid-on for a single. India 426/6 (132 overs)

# Ravindra Jadeja is the new batsman in !

# Wicket! Pujara's terrific innings comes to an end on 193. Nathan Lyon bowls a beautiful delivery in the 130th over and Pujara attempts to whip it into the leg side, but ends up lobbying back to the bowler who takes a low catch. The SCG crowd give Pujara a standing ovation as he walks off the field. India 418/6 (130 overs)

Out. Pujara's epic comes to an end on 193. What a knock. He walks off to a standing ovation from the SCG crowd. Lyon the bowler.

# Australia missed a great chance to dismiss Pujara, who is approaching towards 200-run mark, when the Indian batsman went for the cut in the 125th over, but got the outside edge and the ball flew straight to Usman Khawaja at first slip who missed the chance. India 417/5 (128 overs)

So close! Khawaja nearly takes a beauty at first slip, but Pujara gets a life on 192 #AUSvIND https://t.co/CaiEbSjKbT

# Pujara (185) has been going strong while Pant (36) has settled down at the middle as India cross the 400-run mark in their first innings against Australia. The Indian first drop is now just 15 runs away from his double century. The hosts, meanwhile, are desperately looking for a wicket now. India 402/5 (123 overs)

That's lunch at the SCG with Pujara continuing to lead the way on 181*.

# Pujara (180) and Pant (25) have brought up a 50-run stand for the sixth wicket as India are quickly nearing 400 runs in their first innings. It is the second time in India's last three innings that they have put up a half-century stand for the sixth wicket. Meanwhile, Pujara has also completed 500 runs in the ongoing series. India 386/5 (116 overs)

# In the last few overs, the run-rate has improved for India as runs are coming in at a good pace for them. Pujara (171) continues to pile pressure on the Australians and is quickly moving towards his double century. The Tim Paine-led side, on the other hand, call back Hazlewood into the attack as Australia look to take a wicket before lunch. India 371/5 (112 overs)

# The visitors experienced a nervy moment in the 105th over when Australian skipper Tim Paine went for a review for caught behind against Pant off Nathan Lyon's delivery. The Indian batsman seemed to have edged one to Paine behind the wicket, but review showed that there is nothing. India 346/5 (106 overs)

Review... NOT OUT! Appeal for caught behind against Pant off Lyon's bowling, but nothing on Snicko this time. Aussies out of reviews.

# Rishabh Pant is the new batsman in for India!

# Wicket! Soon after Pujara reached the 150-run mark, Australia finally breathed a sigh of relief as they broke a crucial 101-run partnership between the Indian first drop and Hanuma Vihari. The latter batsman attempts to sweep Lyon, but gets a little flick on the edge of the bat for an easy catch at short leg. India go for a review, but the decision upheld. India 329/5 (102 overs)

Review... OUT! Vihari is given out caught in close for 42 off Lyon. He goes upstairs and Snicko shows a little something.

# Pujara continues to remain firm at the crease, with Vihari also approaching towards his half-century. Though the visitors have managed to add just 16 runs this morning, their calm approach could benefit them later in the day. The Australian bowlers, meanwhile, have not conceded many runs unlike the opening day, However, the hosts are yet to take a wicket. India 319/4 (100 overs)

# India made a quiet but solid start to their innings on the second day. While Pujara--who has been quite consistent with his defensive play on the opening day--begins Day 2 in the similar manner, Vihari seems to be having a testing time in the middle as he is not disturbing the balls outside off-stump and allowing the same to go past him. India 314/4 (95 overs)

# Josh Hazlewood will begin the proceedings for Australia today!

# Cheteshwar Pujara and Hanuma Vihari have walked down the crease to resume India's innings.

And he waits - @cheteshwar1 in all readiness before the start of Day 2 #TeamIndia #AUSvsIND pic.twitter.com/qOH60q19ml

# The second day's play is all set to get underway!

Cheteshwar Pujara struck his 18th Test century while Mayank Agarwal also made significant contribution with the bat as India reached 303-4 at stumps on the opening day of the series-deciding fourth and final Test against Australia at the Sydney Cricket Ground (SCG) on Thursday.

After winning the toss and opting to bat first, India made a poor start to their innings as they lost opener KL Rahul cheaply for nine runs. Josh Hazlewood gave the breakthrough to Australia as he delivered a length ball outside off and Rahul went for a defensive shot, but got an outside edge straight to Shaun Marsh.

Subsequently, Agarwal joined forces with Pujara as he not only notched up a well-deserved second half-century in the longest format of the game but also stitched a crucial 116-run stand for the second wicket to steady India's innings.

However, Agarwal failed to convert his fifty into hundred as he was dismissed for 77 runs off Nathan Lyon's delivery.

Though skipper Virat Kohli then provided a much-needed support to Pujara from the other end, he failed to hold for a long at the crease and went back to pavilion for 23 runs.

Pujara then notched up his third Test century of the series and 18th overall off 199 balls. He achieved the feat by clipping away to the fine-leg boundary off Starc's delivery.

At the end of the day's play, Pujara was standing strong at the crease and batting at 130 runs while Hanuma Vihari (39) was well-supporting him from the other hand.

For Australia,  Josh Hazlewood bagged two wickets while Mitchell Starc and Nathan Lyon also chipped in with a wicket each.