India clinched their first-ever Test series win in Australia after the rain-marred fourth and the final Test between the two sides ended in a dramatic draw at the SCG on Monday. 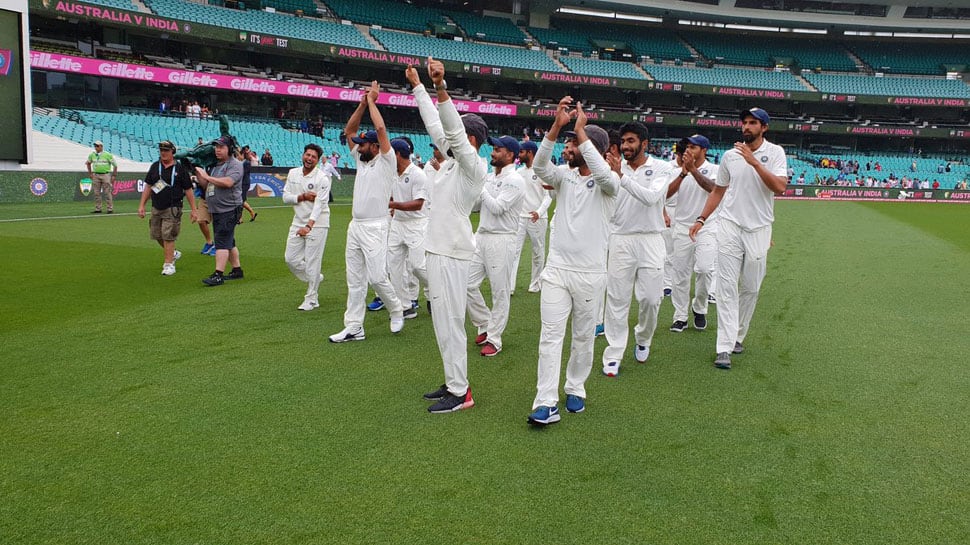 The Virat Kohli-led side scripted history on Monday as they clinched India's first-ever Test series win in Australia by 2-1 after rain played the spoilsport on the fifth day and ended the fourth and the final match in a draw at the Sydney Cricket Ground (SCG).

The rain delayed the start of the play for the second time in the match before the umpires decided to call off the fifth day's play due to wet outfield.

On Sunday, Indian skipper Virat Kohli had enforced the follow-on after bundling Australia out for 300 runs, taking a huge 322-run first-innings lead. It marked the first time that an Australian side was asked bat in back-to-back innings on home soil in 31 years.

Following on, Australia had reached 6/0 in four overs they played before rain and bad light called off the fourth's day play early.

Earlier, Kuldeep Yadav scalped a five-wicket haul in his maiden Test match in Australia to help India bundle out the hosts for 300 runs in their first-innings after rain delayed the start of fourth day as well.

Marcus Harris was the top-scorer for Australia for his 79-run knock. He also shared crucial partnerships of 72 and 56 runs with Usman Khawaja (27) and Marnus Harris
(38)

India had declared their first-innings at a gigantic score of 622 for seven after some incredible batting performances from the Indian batsmen.

Though Pujara fell just seven runs short of double centuriy, he finished with a magnificent knock of 193 to bring up his 18th Test hundred.

Rishabh Pant (159) scored his second Test century and became the first Indian wicketkeeper to notch a ton Down Under.

Mayank Agarwal (77) and Ravindra Jadeja (81) also made sigificant contributions with the bat.

With the win, Virat Kohli has become the first Indian and Asian captain to lift a trophy Down Under.

# The fifth day's play has been called off due to rain. India win the Test series 2-1!

# Update: The match officials will be meeting with the groundstaff at 9 am.

# Rain continues to play spoilsport even after lunch as India stand on brink of clinching their maiden Test series win in Australia.

# Early lunch will be taken after start of play was interrupted by rain.

UPDATE: So, the covers are still on at the SCG and lunch will be taken at 12:30pm AEDT. No play for at least another hour and a bit... #AUSvIND https://t.co/CaiEbSjKbT

# Rain has delayed the start of the play. The covers are coming on.

Covers are on. Begun to rain here. The start has been delayed #AUSvIND pic.twitter.com/KjPxppMMAE

# India and Australia will begin the fifth day's play at 4.30 am (local time)

Gloomy morning in Sydney but the covers are off. Play to start at 10am AEDT #AUSvIND pic.twitter.com/f5x1AWVqfg

Australia reached 6-0 in follow-on against India before the bad light and subsequent rain played the spoilsport for the second time and abandoned the fourth day's play of the series-deciding fourth and final Test early at the Sydney Cricket Ground (SCG) on Sunday.

Peter Handscomb and Pat Cummins--who resumed the hosts' innings on the fourth day-- failed to display a similar kind of calm performance as they did on Saturday and were dismissed for 37 and 25 runs, respectively.

While Nathan Lyon went back to pavilion without scoring a run, Mitchell Starc (29 not out) and Josh Hazlewood (21) frustrated India for some time before the latter got out to wrap up Australia's innings.

For India, Kuldeep Yadav was the pick of the bowlers as he finished with a five-wicket haul. It is Kuldeep's first Test on Australian soil and he collected five for 99 runs in the same.

India, who posted a score of 622-7 declared in their first-innings, decided to enforce a follow-on.

At stumps, Australia were still trailing by 316 runs, with Marcus Harris (two) and Usman Khawaja (four) batting at the crease.

Earlier, bad light and rain delayed the start of the play before the entire first-session was washed out. There was some play in the post-lunch session, but bad light once again ended the day early.