1st T20I, India vs Bangladesh: As it Happened

Bangladesh won the toss and opted to bowl first in the opening T20I of the three-match series against India at the newly-named Arun Jaitley Stadium in New Delhi on Sunday. 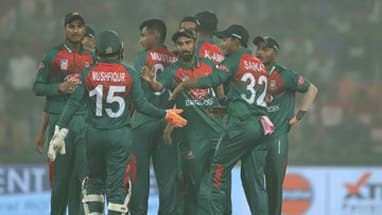 Mushfiqur Rahim smashed an unbeaten half-century while captain Mahmudullah remained unbeaten at 15 as Bangladesh defeat India by seven wickets in the opening T20I of the three-match series at the newly-named Arun Jaitley Stadium in New Delhi on Sunday.

# Yuzvendra Chahal gave away 13 runs off the 18th over before Khaleel ahmed was smashed by Mushfiqur Rahim for back-to-back boundaries in the 18th over. Bangladesh 145/3 (19 overs)

# WICKET! Soumya Sarkar (39) was clean bowled by Khaleel Ahmed on the last delivery of the 17th over. With this, the partnership of 60 runs between Sarkar and Rahim also came to an end. Bangladesh 114/3 (17 overs)

# Soumya Sarkar and Mushfiqur Rahim continue to remain strong at the crease at their respective scores of 37 and 30 as Bangladesh cross 100-run mark. Bangladesh 105/2 (16 overs)

# A quite expensive over from Hardik Pandya as he conceded 12 runs to Bangladesh. Soumya Sarkar (34) dragged the fourth delivery of the 15th over towards deep midwicket for six runs. Bangladesh 94/2 (14 overs)

# 13 runs off the last two overs, including a boundary from Mushfiqur Rahim on a Yuzvendra Chahal delivery. Soumya Sarkar (24) and Rahim (23) continue to stand strong at the crease and are nearing a half-century mark. India, on the other hand, need to grab some quick wickets to turn the game in their favour. Bangladesh 82/2 (13 overs)

# Eight runs off the last two overs. Mushfiqur Rahim (13) swept the fourth delivery of the 11th over away firmly behind square leg for four runs. Bangladesh need 80 runs from 54 balls. Bangladesh 69/2 (11 overs)

# WICKET! Deepak Chahar breaks Mohammad Naim-Soumya Sarkar's partnership. Naim (26) is taken at long-on by Shikhar Dhawan on the fifth delivery of the eighth over. Bangladesh 54/2 (7.5 overs)

# India have bowled very expensive last two overs, conceding 25 runs to Bangladesh. Mohammad Naim (25) flicked the first delivery of the fifth over towards deep midwicket for a six before he smashed the fifth delivery from Chahar in the gap between mid-off and cover for four runs. Subsequently, Washington Sundar was smashed for a six and boundary by Soumya Sarkar (12) and Naim, respectively. Bangladesh 45/1 (5 overs)

# Seven runs off the last two overs. Soumya Sarkar got off the mark by guiding the third delivery of the 10th over past the bowler's right to long off for a single. Bangladesh 16/1 (3 overs)

# Soumya Sarkar is the new batsman in!

# WICKET!! Deepak Chahar gives breakthrough to India as early as in the very first over. Liton Das (7) is taken by KL Rahul at cover point on the fifth delivery. Bangladesh 9/1 (1 over)

# Liton Das and Mohammad Naim to open the batting for Bangladesh. Deepak Chahar begins the proceedings for the hosts.

# Wicket! India are now down by six wickets after Rishabh Pant was caught by Mohammad Naim over long-on on the second delivery of the 19th over by Shafiul Islam. India 120/6 (18.2 overs)

# Washington Sundar is the new batsman in!

# WICKET!! Shivam Dube failed to click with the bat on his T20I debut as he ended up handing a return catch to Afif Hossain on the last delivery of the 16th over. India, however, have crossed 100-run mark. India 102/5 (16 overs)

# Hardik Pandya is the new batsman!

# WICKET! Shikhar Dhawan (41) fell short of a T20I half-century after being run out on the fifth delivery of the 15th over. After picking up a single, Pant (7) called for a second run but changed his mind as Mahmudullah collected the ball and threw it to the keeper Mushfiqur, who rattled the stumps. India 95/4 (15 overs)

# 10 runs off the last two overs for India. Dhawan smashed Mosaddek Hossain for a boundary on the third delivery of the 13th over. India 83/3 (13 overs)

# WICKET! Aminul Islam bags his second wicket of the day as Shreyas Iyer (22) goes for aerial once again on the second delivery of the 11th over, but ends up being caught by Mohammad Naim at long-off. India 73/3 (11 overs)

# 16 runs off the last three overs, including a six and four runs. Shreyas Iyer (eight) lifts the last ball of the seventh over towards long off to end the over with a six before Dhawan shot the fourth delivery between keeper and short fine leg for a boundary. India 51/2 (8 overs)

# WICKET! Aminul Islam strikes for Bangladesh. KL Rahul (15) looked to cut on the third delivery of the seventh over but ended up handing it to new skipper Mahmudullah at short cover. India 36/2 (6.3 overs)

# Eight runs off the last two overs, including a boundary. KL Rahul (1) opened his account by flicking the fifth delivery of the second over off his pads to midwicket for a quick single before he crunched a square cut on the third delivery of the third over to the point for a boundary. India 18/1 (3 overs)

# KL Rahul is the new batsman in!

# WICKET! Shafiul Islam gives breakthrough to Bangladesh as early as in the very first over. Indian opener Rohit Sharma (9) was caught leg before wicket on the sixth delivery of the opening over. Dhawan, on the other hand, tapped the third delivery towards point to get off the mark with a quick single. India 10/1 (1 over)

# Rohit Sharma and Shikhar Dhawan will begin the innings for India. Shafiul Islam to open the attack for Bangladesh.

# The two teams have walked down the crease for their national anthems.

# Mohammad Naim is all set to make debut for Bangladesh!

# The toss will take place shortly!

# Shivam Dube has been handed T20I cap by head coach Ravi Shastri. He is now all set to make his debut for India.

Proud moment for Shivam Dube who is all set to make his T20I debut for #TeamIndia.

# India and Bangladesh are all set to take on each other in first T20I!

Hello and welcome to the Arun Jaitley Stadium, Delhi for the 1st T20I against Bangladesh.#INDvBAN pic.twitter.com/sW1rI7IWOU

Regular skipper Virat Kohli has been rested for the Bangladesh T20I series and in his absence, the Indian team will be led by star opener Rohit Sharma--who will look to lead from the front by coming up with yet again good batting performance.

Bangladesh, on the other hand, will also be without their regular captain Shakib Al Hasan, who has been handed a two-year suspension by the International Cricket Council (ICC), with one year of that suspended after he accepted three charges of breaching the anti-corruption code.

All eyes will now be on the new skipper Mahmudullah, who will look to guide Bangladesh to victory against a strong India side.