Bangladesh won the toss and asked India to bat first in the crucial third and last T20I of the three-match series at Vidarbha Cricket Association Stadium in Maharashtra on Sunday. 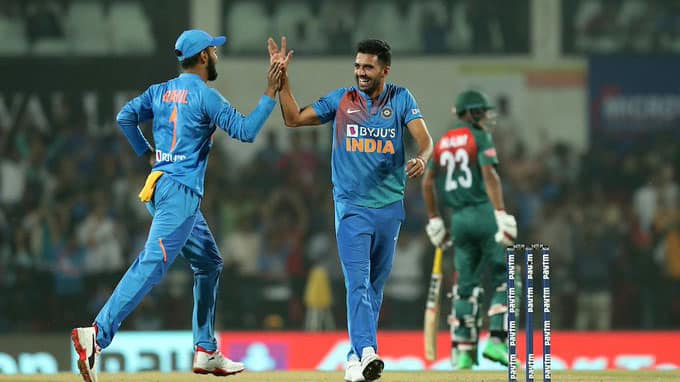 Deepak Chahar finished with brilliant figures of six for seven as India defeated Bangaldesh by 30 runs in the third and last T20I  at Vidarbha Cricket Association Stadium in Maharashtra on Sunday.  With the win, India have clinched the T20I series 2-1 against Bangladesh.

# Deepak Chahar has finished with brilliant figures of six for seven. It is by far the best bowling figures in the shortest format of the game.

# WICKET! Back-to-back wickets for Deepak Chahar as he removed Mustafizur Rahman and Aminul Islam for one and nine respectively. While Rahman was caught by Iyer at deep point on the first delivery of the 20th over, Islam was bowled out on the very next ball. Bangladesh 144 (19.2 overs)

# WICKET!  Shafiul Islam was taken by KL Rahul at long-on on the last delivery of the 18th over by Deepak Chahar. Bangladesh 135/8 (18 overs)

# Shafiul Islam comes in to bat!

# WICKET! Yuzvendra Chahal has finally got the breakthrough by bowling out Bangladesh skipper Mahmudullah for eight on the fifth delivery of the 17th over. Bangladesh 131/7 (17 overs)

# Aminul Islam is the new batsman in!

# WICKET! Back-to-Back wickets for Sgivam Dube. Mohammad Naim (81) was clean bowled by Shivam Dube on the third delivery before Afif Hossain (0) handed a return catch to Dube on the very next ball. Bangladesh 126/6 (16 overs)

# WICKET! Mushfiqur Rahim, who was declared Player of the Match in the opening T20I for his 60-run knock, failed to click with the bat and was clean bowled by Shivam Dube on the very first ball he faced. Bangladesh 116/4 (14 overs)

# WICKET!! Deepak Chahar has finally helped India break a crucial 98-run partnership between Mohammad Naim (71) and Mohammad Mithun (27).  Mithun was caught by Kl Rahul at long-off on the last delivery of the 13th over. Bangladesh 110/3 (13 overs)

# FIFTY! Mohammad Naim (57) has brought up a half-century off 34 balls. He reached the mark by smashing the fifth delivery of the 11th over towards the gap at deep backward square leg for four runs. Bangladesh 91/2 (11 overs)

Game on in Nagpur!

# Six runs off the last two overs. Mohammad Mithun and Mohammad Naim are currently batting at the crease at their respective scores of one and eight and looking to stitch a partnership after loosing openers early. Bangladesh 18/2 (5 overs)

# WICKET!! Two wickets in an over for Deepak Chahar. Liton Das (9) was caught by Washington Sundar over the leg side on the fourth delivery of the third over before Soumya Sarkar (0) was taken by Shivam Dube on the very next delivery. Bangladesh 12/2 (3 overs)

# Liton Das and Mohammad Naim have walked down the crease to begin Bangladesh's innings. Khaleel Ahmed to open the attack for India.

# Manish Pandey and Shivam Dube are currently batting at the crease.

# WICKET! It's two wicket in an over for Soumya Sarkar. Shreyas Iyer (62) once again looked to go for an aerial shot on the fifth delivery of the 17th over, but ended up handing a good catch to Liton Das at long-off. India 144/5 (17 overs)

# WICKET!! Rishabh Pant once again failed to click with the bat as he was clean bowled by Soumya Sarkar for six on the first delivery of the 17th over. India 139/4 (16.1 overs)

# FIFTY!! Shreyas Iyer has brought up his maiden T20I half-century off just 27 balls. He achieved the feat by flicking the fifth delivery of the 15th over behind square on the leg side for a single. The Indian batsman smashed Afif Hossain for three back-to-back sixes in that over before reaching fifty. India 129/3 (15 overs)

# FIFTY!! KL Rahul (51) has brought up a half-century off 33 balls. He crashed the fifth delivery of the 12th over off the backfoot to deep point to achieve the feat with two runs. India 94/2 (12 overs)

# India have added 17 runs off the last two overs. KL Rahul (41) flayed a cut past point on the first delivery of the 10th over by Mustafizur Rahman for four runs before lifted a drive over cover on the fourth ball for another boundary. India 71/2 (10 overs)

# 13 runs off the last overs. Shreyas Iyer and KL Rahul are currently batting at their respective scores of 27 and five as India have crossed the 50-run mark. India 54/2 (8 overs)

# WICKET!! Shafiul Islam strikes again. Dhawan (19) came down the wicket on the second delivery of the sixth over to slog leg-side, only to see Bangladesh skipper Mahmudullah take a good catch. India 35/2 (5.2 overs)

# KL Rahul is the new batsman in!

# WICKET!! Shafiul Islam gives breakthrough to Bangladesh as early as in the second over. The Bangladesh bowler delivered a length ball on the third delivery while Rohit (2) stood firm to punch straight, but the ball took the inside edge of the bat before hitting into the stumps. India 3/1 (2 overs)

# Rohit Sharma and Shikhar Dhawan have walked down the crease to begin India's innings. Al-Amin Hossain to open the proceedings for the visitors.

# India have called in Manish Pandey as a replacement for Krunal Pandya. For Bangladesh, Mohammed Mithun comes in for Mosaddek Hossain.

# The toss will take place in a few minutes!

# India and Bangladesh are all set to play third and final T20I.

On Thursday, interim skipper Rohit Sharma led from the front as he smashed a blistering knock of 85 runs off 43 balls in his 100th T20I to help India chase down the target of 153 runs in 15.4 overs and level the three-match series 1-1 at the Saurashtra Cricket Association Stadium in Rajkot.

Earlier, Bangladesh dominated India in all three departments of the game to clinch a seven-wicket win in the opening T20I at the newly-named Arun Jaitley Stadium in New Delhi. It was also Bangladesh's first-ever Twenty20I win over India.