Indian skipper Virat Kohli and batsman Cheteshwar Pujara smashed half-centuries each as India reached 174 for three at stumps on the opening day of historic Day-Night pink ball match at Eden Gardens in Kolkata on Friday. 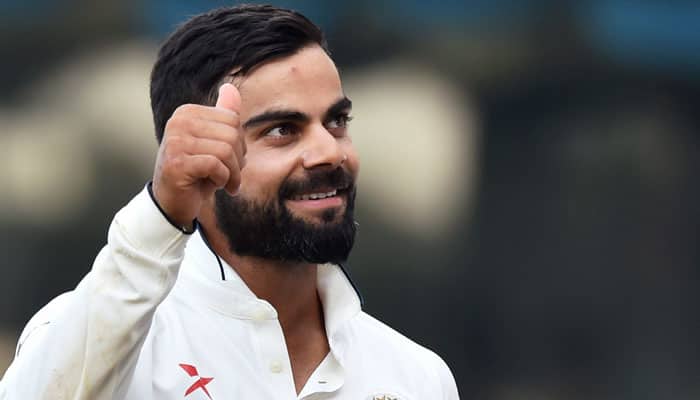 Indian skipper Virat Kohli and batsman Cheteshwar Pujara smashed half-centuries each as India reached 174 for three at stumps on the opening day of historic Day-Night pink ball match at Eden Gardens in Kolkata on Friday.

# FIFTY!! Virat Kohli has brought up his 23rd half-century off just 76 balls. He reached the mark by smashing the fifth delivery of the 40th over towards midwicket for four runs. India 144/3 (40 overs)

# WICKET! Soon after bringing up his 24th Test half-century off 93 balls, Pujara (55) was caught by Shadman Islam at second slip on the first delivery of the 40th over by Ebadat Hossain. India 137/3 (39.1 overs)

# India added 10 runs in the last five overs. Pujara (45) continues to stand strong at the crease and is approaching his Test half-century, while Virat Kohli (36) is well-supporting him from the other end. India 117/2 (33 overs)

# 12 runs off the last four overs. Kohli (32) smashed the second delivery of the 23rd over to the left of mid-on for four runs. The Indian skipper and Pujara (39) are looking good at the moment and have guided the side past 100-run mark to take a lead against Bangladesh in the first innings. India 107/2 (28 overs)

# India added 16 runs off the last five overs. Kohli (24) rolled away the first delivery of the 18th over between second slip and gully for four runs before Pujara () punched the fifth delivery of the 19th over  crisply to the right of backward point for a boundary. India  88/2 (22 overs)

# 25 runs off the last four overs, including three boundaries each from Virat Kohli (16) and Cheteshwar Pujara (20). The Indian skipper got off the mark by edging the last delivery of the 13th over between second slip and gully for four runs. India 72/2 (17 overs)

# WICKET! After smashing back-to-back boundaries, Indian opener Rohit Sharma (21) was caught leg before wicket on the fifth delivery of the 13th over by Ebadat Hossain. India 43/2 (12.5 overs)

# Seven runs off the last three overs, including a boundary by Cheteshwar Pujara (7). India are now trailing by 71 runs in the first innings. India 35/1 (12 overs)

# Just two runs off the last four overs for India. Cheteshwar Pujara (1) whipped the first ball of the seventh over down to long leg to get off the mark with a single. India 28/1 (9 overs)

# WICKET!! Mayank Agarwal (14) was caught by concussion sub Mehidy Hasan Miraz at gully on the fourth delivery of the fifth over by Al-Amin Hossain. India 26/1 (5 overs)

# 17 runs off the first three overs from Bangladesh. Mayank Agarwal (10) got off the mark with a boundary by hitting the very first delivery behind point. Rohit Sharma (7) rocked back on the fifth delivery of the same over before clearing deep square leg for a six. India 18/0 (3 overs)

# Rohit Sharma and Mayank Agarwal have walked down the crease to begin India's first innings. Al-Amin Hossain will open the attack for Bangladesh.

# India bundle out Bangladesh for 106 in the first innings!

# WICKET! Abu Jayed (0) smashed the third delivery of the 31st over by Mohammad Shami straight to Rohit Sharma at second slip, only for Cheteshwar Pujara to bag a one-bounce catch at first slip. Bangladesh 106 (30.3 overs)

# WICKET!! Nayeem Hasan was clean bowled by Ishant Sharma on the fifth delivery of the 30th over. The Bangladesh batsman went back to pavilion for 19 runs. Bangladesh 105/9 (30 overs)

# Al-Amin Hossain is the new batsman in!

# WICKET!! Mehidy Hasan Miraz was caught by at a square-ish midwicket on the last delivery of the 28th over by Ishant Sharma. Bangladesh 98/8 (28 overs)

# WICKET!! Ebadat Hossain (1) was bowled out by Ishant Sharma on the fifth delivery of the 24th over.Bangladesh have now lost seven wickets. Bangladesh 82/7 (24 overs)

# Ebadat Hossain is the new batsman in!

# Liton Das retires hurt after a blow right on his forehead, albeit on the helmet on the fourth delivery of the 22nd over by Ishant Sharma.

# Nayeem Hasan is the new batsman in!

# WICKET! Ishant Sharma strikes for India. Mahmudullah (6) edged the fourth delivery of the 20th over towards first slip, only to see Wriddhiman Saha dive to his right at full stretch to take an incredible catch. Bangladesh 64/6 (20 overs)

# Liton Das is the new batsman in!

# WICKET! Umesh Yadav strikes again. Shadman Islam edged the second deliver of the 15th over behind the stumps to wicketkeeper-batsman Wriddhiman Saha. The Bangladesh opener went back to pavilion after scoring 29. Bangladesh 47/5 (15 overs)

# WICKET! India are on a roll today as they have reduced Bangladesh to 26 for 4. Mushfiqur Rahim too was bowled out for a duck off a Mohammad Shami delivery in the 12th over. The fifth delivery of the over by Shami cannoned into the stumps off the inside edge of Rahim's bat. Bangladesh 26/4 (12 overs)

# WICKET!! It's two wicket in an over for Umesh Yadav. Mohammad Mithun also departed for a duck after being clean bowled by Yadav on the third ball. Bangladesh 17/3 (11 overs)

# WICKET! Mominul Haque (0) got a thick edge of the bat on the first delivery of the 11th over by Umesh Yadav as opener Rohit Sharma dived across from second and plucked the ball out one-handed. Bangladesh 17/2 (10.1 overs)

# WICKET!! Ishant Sharma gives breakthrough to India. After surviving dismissal on the first ball of the seventh over, Imrul Kayes (4) was caught leg before wicket on the third delivery of the seventh over. Bangladesh 15/1 (7 overs)

# Umesh Yadav to share the new ball with Ishant Sharma.

# Imrul Kayes and Shadman Islam have walked down the crease to open the batting for Bangladesh. Ishant Sharma will begin the proceedings for India.

# Bangladesh Prime Minister Sheikh Hasina has just been introduced to both the teams.

# India have named unchanged Playing XI, while Bangladesh have made two changes in their squad. Al-Amin Hossain and Nayeem Hasan have been roped in place of  Taijul Islam and Mehidy Hasan out.

Bangladesh have won the toss and opted to bat first in the second Test at Eden Gardens Kolkata.#BANvIND #RiseOfTheTigers pic.twitter.com/COlVWwx4CT

# The toss will take place shortly.

# India and Bangladesh are all set to play their first-ever Day-Night Test.

Pink is the colour of the day @Paytm #PinkBallTest pic.twitter.com/pzhYOjvBoZ

Having already taken a 1-0 lead in the two-match Test series, India will look to complete a series whitewash against Bangladesh when they play their first-ever Day-Night pink ball match at Eden Gardens in Kolkata on Friday.

India, who are currently ranked at the top spot in the International Cricket Council (ICC) Test rankings, will become the ninth country to play under lights in the longest format of the game since Australia and New Zealand played the first-ever pink ball match.

According to reports, Army paratroopers are likely to fly into the Eden Gardens to hand over a pink ball each to the two skippers prior to the toss.

On the eve of the match, India skipper Virat Kohli on Thursday expressed his excitement over the same by describing the iconic day-night match against Bangladesh at Eden Gardens as a "landmark occassion" for the country's cricket.

"This pink ball Test match is a challenge for us. It is very exciting for us as the energy will be very high. It is a landmark occasion," ANI had quoted Kohli as saying.