It is yet unclear on what the message implied but it could be from someone upset at the England cricket team's lack of preparation for the Test series where India are giving them a run for their money. 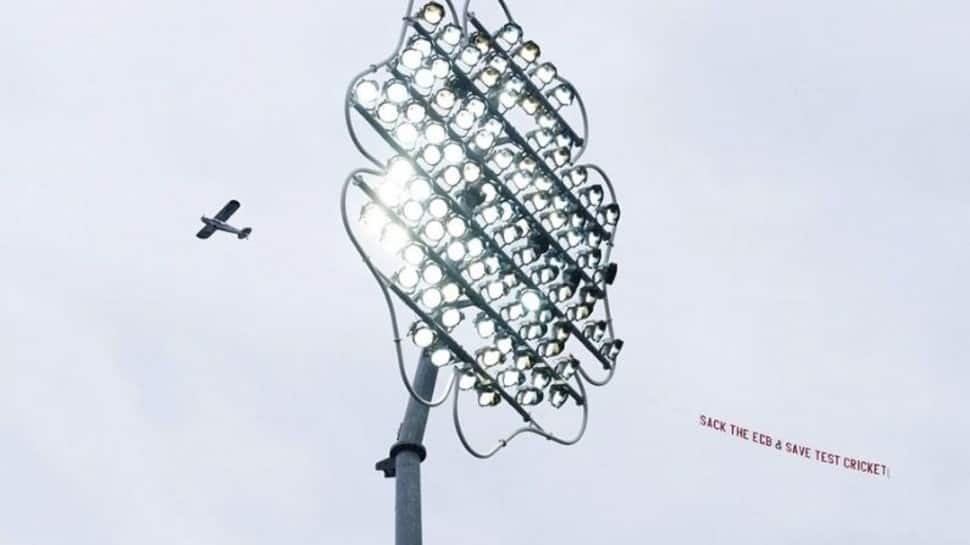 England's struggles in Test cricket in recent times seem to have disappointed someone a lot as Headingley fans on Friday witnessed a message that hit out at the England and Wales Cricket Board (ECB) for prioritising white-ball cricket over Test cricket.

A banner, attached to a plane, flew in the sky above the ground on Friday with a message, "Sack the ECB, save Test cricket".

A friend watching this match at Headingley, Leeds sends me this.

Sack the ECB and save test cricket pic.twitter.com/E8xONyF5cI

It is yet unclear on what the message implied but it could be from someone upset at the England cricket team's lack of preparation for the Test series where India are giving them a run for their money.

The ECB had, this season, prioritised its domestic limited-overs competition, The Hundred, and summoned its Test players to represent the franchises in the first few games ahead of the Test series against India.

That apart, some of their top Test cricketers were allowed to rest during the home Test series against New Zealand in June following their return from the Indian Premier League (IPL) 2021's first leg.

The visitors, on the other hand, got to play the World Test Championship final and had one-and-a-half months to prepare for the series.

Meanwhile, an under-fire Cheteshwar Pujara played one of his most aggressive knocks as the Indian top-order showed plenty of resolve to reach 215 for two and keep the third Test against England alive with two more days remaining.

Pujara, who has been pilloried of late for his ultra-defensive approach and castigated for not showing enough "intent", smashed 16 boundaries in his 91 not out off 180 balls on the third day. With this knock, he overshadowed the two megastars in skipper Virat Kohli and the supremely-talented Rohit Sharma. It's a rarity but Friday was one of those days when the cricketing gods sided with Pujara.

Pujara has already done enough to give his career a new lease of life. With two days left in the game, England remain favourites despite the pitch being good for batting as India still need 139 runs to avoid innings defeat, after the hosts scored 432 in their first innings to gain a mammoth 354-run lead.