Indian bowlers wreaked havoc in the second session as England went from 141/2 to 147/6. 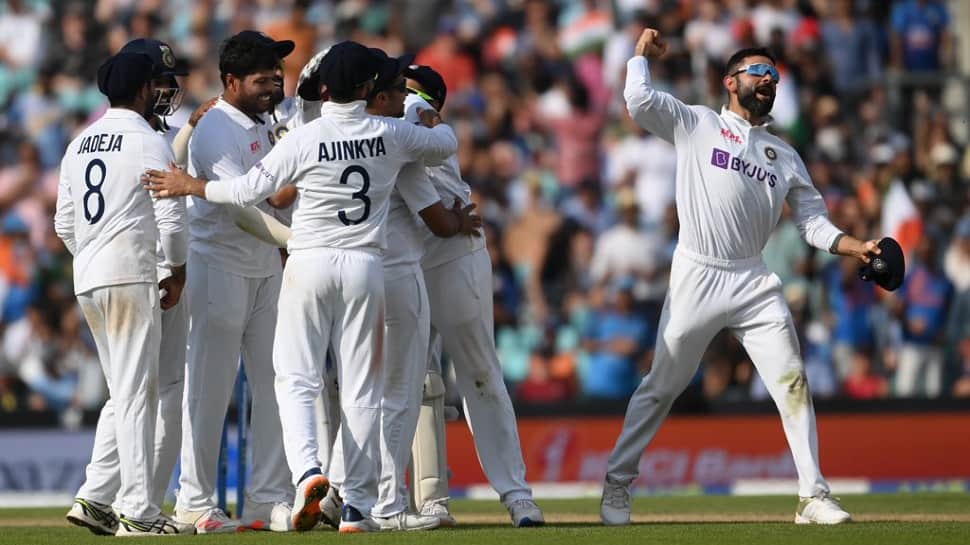 India pulled off a sensational 157-run win in the fourth Test against England, only their second-ever at The Oval and first at the venue after 1971, to take an unassailable 2-1 lead in the five-match series. This is also only the second time in history -- after 1986 -- that India have won two Tests on one tour of England.

They had beaten England by 151 runs in the second Test at Lord's last month.

England had resumed the fifth and final day strongly placed at 77 without loss and even though they lost a couple of wickets in the first session, they had moved to 131/2 and looked good to draw the Test.

However, within 35 balls, between overs 61.3 and 67.2, pacer Jasprit Bumrah (2/27) and spinner Ravindra Jadeja (2/50) turned the game in India's favour, sharing four wickets to spear the heart of England batting.

What a fantastic come-from-behind victory this is at The Oval!

We head to Manchester with a 2-1 lead! #ENGvIND

Jadeja removed opener Haseeb Hameed (63 off 193) through one that turned from the rough and clipped his off-stump.

Bumrah then hit England with a double whammy as he breached the defences of Ollie Pope (2) and Jonny Bairstow (0) in his successive overs.

A 35-run partnership between Joe Root (36) and Chris Woakes (18) kept England alive. But then Root was unlucky to be bowled off Shardul Thakur as he chopped the ball onto the stumps.

Woakes followed at the stroke of tea, caught at mid-wicket off Umesh Yadav (3/60). India had picked six wickets in the session between lunch and tea.

They mopped up the tail quickly post-tea.

The victory was through a remarkable turnaround for India as they had been bowled out for 191 in the first innings. But they managed to restrict England's first-innings lead to just 99 runs on a placid wicket.

Virat Kohli's men then ensured better batting in second innings. The top three batsmen shone and India, with contribution from middle and lower order took the total to 466 and set England a target of 368 to win.

It was too much for England to handle.

Proud to be part of another memorable victory! Incredible fight and belief shown by the entire team. Onwards and upwards! #InItTogether #AlwaysBelieve #IndVsEng pic.twitter.com/NXQqCVfDsk

Shardul Thakur was the silent performer who made the difference as he hit fifties in both innings and picked three crucial wickets. The first innings half-century took India to 191 and the second innings fifty helped him stitch a 100-run partnership for the seventh wicket with Rishabh Pant and took the lead beyond 300.

Rohit Sharma scored his maiden overseas Test century in the second innings. Cheteshwar Pujara and skipper Virat Kohli chipped in with a fifty each.