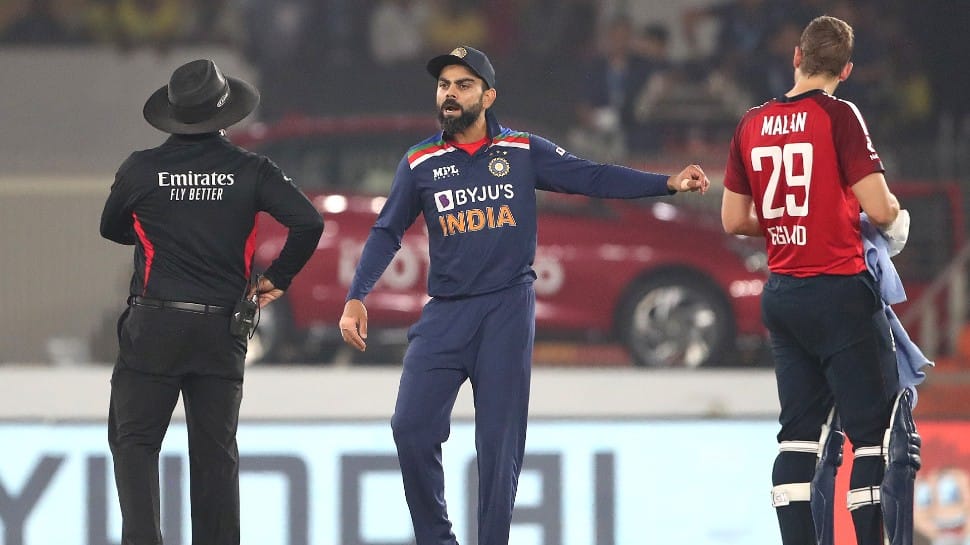 India skipper Virat Kohli on Monday said that the 'Umpire's Call' is creating a lot of confusion at the moment and the lawmakers need to look at it so that it does not leave a grey area when a big tournament is being played.

On Saturday, India defeated England in the fifth T20I, and as a result, the hosts won the series 3-2. Now both teams will lock horns in a three-match ODI series, beginning Tuesday in Pune.

"Look, I have played in the time where there was no DRS. The umpire made the decision whether the batsman liked it or not, it stayed like that. Vice-versa, if the umpire gave it not out and it was out, it stayed like that. Whether it was marginal or not, according to me, umpire's call right now is creating a lot of confusion. When you get bowled as a batsman, you do not expect the ball to hit more than 50 per cent into the stumps to consider yourself getting bowled.

"If it hits the stumps or missing the stumps, it should not matter how much the ball is clipping because it is creating a lot of confusion. One more factor that needs to be considered is how the fielding team responds to a dismissal that is claimed. This is somewhere defining the soft signals as well. You have to question what the spirit of the game is and what those guidelines are because if things like that happen with the Indian cricket team overseas then you are talking about completely different conversation about spirit of the game.

"So look, it is a serious thing which needs to be considered because there is a lot at stake in bigger tournaments. You do not want any grey area hampering the game and it leaves with you no clarity," he added.

In the fourth T20I against England, Suryakumar Yadav was sent back to the pavilion by Sam Curran. The batsman tried to play a ramp shot but Dawid Malan ended up taking the catch. Replays indicated that the ball might have hit the ground when Malan was taking the catch, however, as the soft signal was out, the third umpire stayed with the on-field call citing "lack of conclusive evidence".