Shreyas Iyer is also the only third Indian to score fifty-plus scores in each innings on Test debut. He joins Dilawar Hussain and Sunil Gavaskar in the unique list. 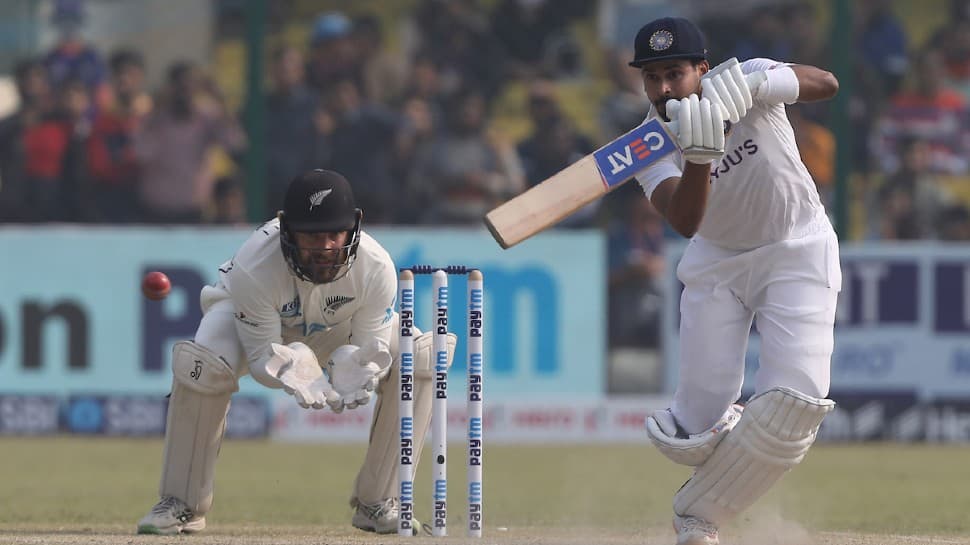 Team India batter Shreyas Iyer continued his rich form as after smashing a century in the first innings of his debut Test, the 26-year-old hit half-century in the second innings of the ongoing first Test against New Zealand in Kanpur.

Also, with the fifty, Iyer created history as he became the first Indian batter to hit a hundred and follow it up with a fifty in his Test debut. Overall, he is the 10th player to achieve the rare feat.

Iyer is also the only third Indian to score fifty-plus scores in each innings on Test debut. He joins Dilawar Hussain and Sunil Gavaskar in the unique list.

Talking about the match, Iyer and Wriddhiman Saha showed grit and determination with the bat to help India fight back against New Zealand in the second session on Day 4 of the ongoing first Test in at Green Park, Kanpur on Sunday.

At the tea break, India's score read 167/7 with the hosts extending their lead to 216. Wriddhiman Saha (22*) is currently unbeaten at the crease.

Shreyas Iyer departs after a fine innings of 65 and that will be Tea on Day 4 of the 1st Test.#TeamIndia lead by 216 runs. How many more will they add to this tally in the final session?

Resuming the second session at 84/5, Shreyas Iyer and Ravichandran Ashwin added 19 more runs to the total before the latter was dismissed by Kyle Jamieson in the 40th over. Ashwin departed after playing a knock of 32 and at this stage, India's lead was 152.

Wriddhiman Saha then joined Shreyas Iyer in the middle and the duo added runs 64 runs for the seventh wicket, however in the 61st over, Iyer (65) was dismissed by Tim Southee.