India vs New Zealand 2019: Captains of both teams pose with trophy ahead of ODIs 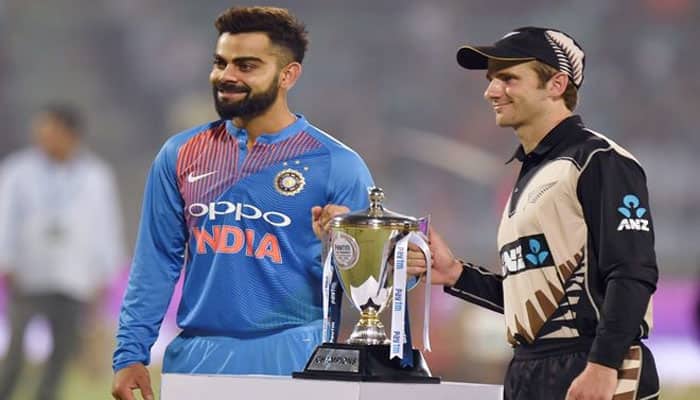 Indian skipper Virat Kohli and his New Zealand counterpart Kane Williamson posed with the trophy on the eve of the five-match ODI series between the two sides, beginning at McLean Park in Napier.

Taking to their official Twitter account, the Board of Control for Cricket in India (BCCI) posted a picture of the two captains all smiles as they hold a silverware ahead of the limited-over series.

"The two captains all smiles with the silverware ahead of the five match ODI series all set to commence tomorrow," the Indian cricket board wrote.

The two captains all smiles with the silverware ahead of the five match ODI series all set to commence tomorrow.#NZvIND pic.twitter.com/mywsdlt6AM

India will be brimming with confidence following their historic twin series victories in Australia and will look to continue their winning momentum in the tour to New Zealand as well.

The Virat Kohli-led side ended a two-month long tour Down Under on a high note by becoming the first Indian team ever to clinch bilateral Test series and ODI series win in Australia. The visitors sealed the two series by 2-1, while they settled with a 1-1 draw in the T20I series.

The Black Caps, on the other hand, are also heading into the series after a 3-0 series whitewash of Sri Lanka in the three-match ODI series and 1-0 win in the lone T20I match between the two sides.

Talking about the squads of the two teams, the Indian selectors had decided to rest their premium fast bowler Jasprit Bumrah for both the Australia and New Zealand tour.

Bhuvneshwar Kumar will lead the pace attack in absence of Bumrah while Mohammed Shami will be the second bowler. The visitors, however, will make choice between Khaleel Ahmed, Mohammed Siraj and Vijay Shankar for their third bowler.

Meanwhile, Mitchell Santner, Tom Latham and Colin de Grandhomme have been recalled in the 14-man New Zeland squad for the first three ODIs against India.

The two sides have played a total of 101 ODIs so far, with India winning 51 of them while 44 coming out in favour of New Zealand.The last time they were in New Zealand was during the five-match ODI series in 2014, when India were beaten 0-4.

The upcoming ODI series between the two countries will also serve as a great preparation for the two sides ahead of the 2019 World Cup, which is set to be held from May 30 to July 14.

Here are the two squads: