India is expected to enter the contest with confidence having beaten New Zealand 3-0 in T20I series, but an injury to KL Rahul means the team will be without the services of three top-class batsmen in Rahul, Virat Kohli and Rohit Sharma. 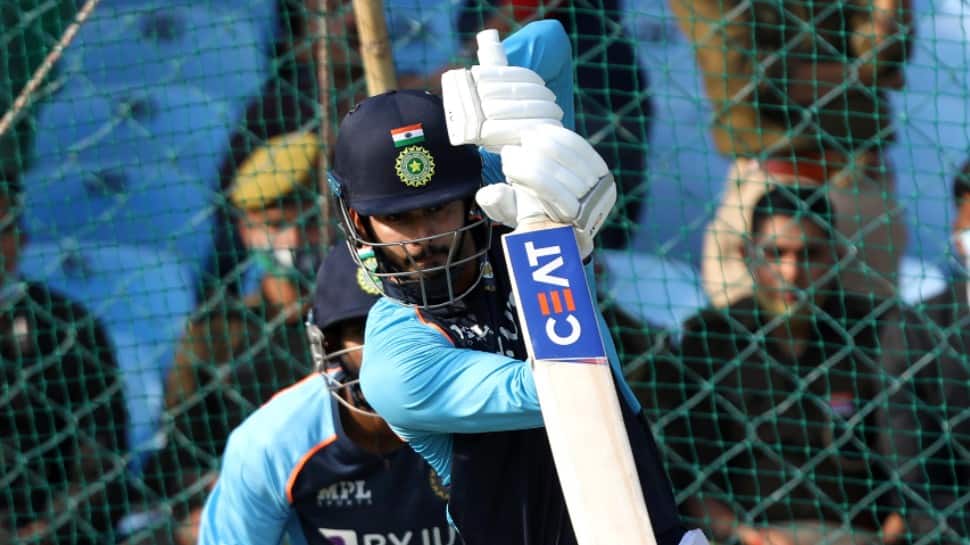 India's Shreyas Iyer bats in the nets in Kanpur ahead of the first Test against New Zealand. (Photo: ANI)
Share:
Written By:

India is expected to enter the contest with confidence having beaten New Zealand 3-0 in the recently-concluded T20I series, but an injury to KL Rahul has now meant that the team will be without the services of three top-class batsmen in Rahul, Virat Kohli and Rohit Sharma. Kohli and Rohit have been rested with an eye on their workload in recent times.

Rahane said KL Rahul will be missed in the Test series against New Zealand, but he is not too worried about the opening combination. “See, it is a big blow. KL Rahul is not available for these two Test matches, he did really well in England. He was in good form and played really well. Obviously, we will miss him but we have guys who can fill that slot, guys who did well for us in the past. Not too worried about the opening slot,” Rahane said during a virtual press conference.

When asked about the conversations with head coach Rahul Dravid, Rahane said, “Rahul bhai just told us to back ourselves and not think too much about it. (Cheteshwar) Pujara and I know our game plan, it is about keeping it simple and backing our plans. If we get in, try to convert it into a big one.

“First of all, we will miss these three guys (Virat Kohli, Rishabh Pant and Rohit Sharma). But it is a good opportunity for all the youngsters to play, whoever gets an opportunity, they will look to play with freedom. This team is all about backing one another. Conditions here and conditions in South Africa will be different, first, we are thinking about this series,” he added.

When asked about his own form, Rahane said, “I am not concerned about my form, I just think about contributing for the team, it is not always scoring a hundred. I always put the team first. I am very fortunate to lead the country, I am not bothered about what is going to happen. I am just focused on giving my best. When I am batting, I am there as a batter. The captaincy hat comes on when I am there in the field. It is all about what sort of game plan we have, what sort of strategy we have. I just like to keep it simple,” he added.

Talking about the game plan on spinning tracks, the India stand-in skipper said: “When we play on spin-friendly wickets, it is a challenge for Indian batters also. As I said, if you are in as a batter, you need to capitalise and score big. As long as we win the series, we are just focusing on that,” he added.

India has also given rest to the likes of Rishabh Pant, Jasprit Bumrah, Mohammed Shami, and it needs to be seen what combination head coach Rahul Dravid feels comfortable with. The spin department is well taken care of as Axar Patel, Ravichandran Ashwin, and Ravindra Jadeja are all available for selection.

Ishant Sharma and Umesh Yadav are expected to be the first choice pacers, looking at the experience they have and Kanpur wicket is also expected to offer some reverse swing as the game progresses on.

When it comes to the batting scheme of things, Mayank Agarwal is set to have Shubman Gill at the top. This series will be extremely important for Rahane and Pujara looking at how eyeballs have been on their performances in the past.

Coming to New Zealand, Kane Williamson will mark a return in the Test series, having taken a break from the T20Is. Pacer Trent Boult would not be available for selection, but the pace bowling department is taken care of with Kyle Jamieson, Tim Southee, and Neil Wagner.