India were bowled out for 242 in their first innings on the opening day of the second and final Test against New Zealand at Hagley Oval in Christchurch on Saturday. 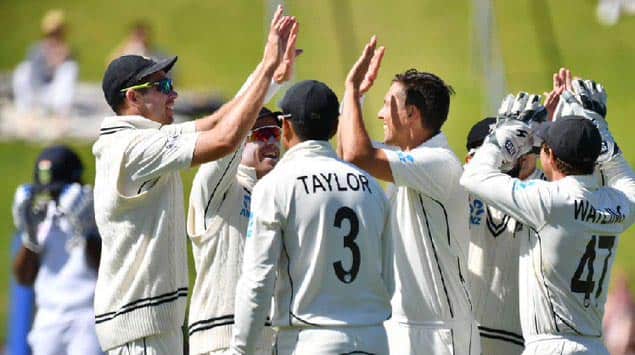 New Zealand reached 63 without the loss of wicket in their first innings against India at stumps on the opening day of the second and final Test against New Zealand at Hagley Oval in Christchurch on Saturday.

At the end of the day's play, Tom Latham and Tom Blundell were looking good at the crease at their respective scores of 27 and 29, respectively.

Earlier, New Zealand won the toss and asked the Virat Kohli-led side to bat first

After Shaw was caught by Kyle Jamieson, skipper Virat Kohli and Ajinkya Rahane were also dismissed cheaply for three and seven runs, respectively by Tim Southee.

Subsequently, Pujara (54) and Hanuma Vihari (55) not only notched up a half-century each but also shared a crucial partnership of 81 runs for the fifth wicket to take India close to the 200-run mark. However, the visitors were eventually bowled out for 242 in their first innings.

Kyle Jamieson was the pick of the bowlers for New Zealand as he bagged five wickets while conceding just 45 runs. Tim Southee and Trent Boult bagged two wickets each while Neil Wagner also chipped in with a wicket.

On Tuesday, India lost the opening Test by 10 wickets at the hands of New Zealand to go 0-1 down in the series. It was their first defeat in the eight matches they have played so far in the International Cricket Council (ICC) World Test Championship.