All-rounder Axar Patel grabbed another five-wicket haul for India in Test cricket on day 3 of the India vs New Zealand test series going on. 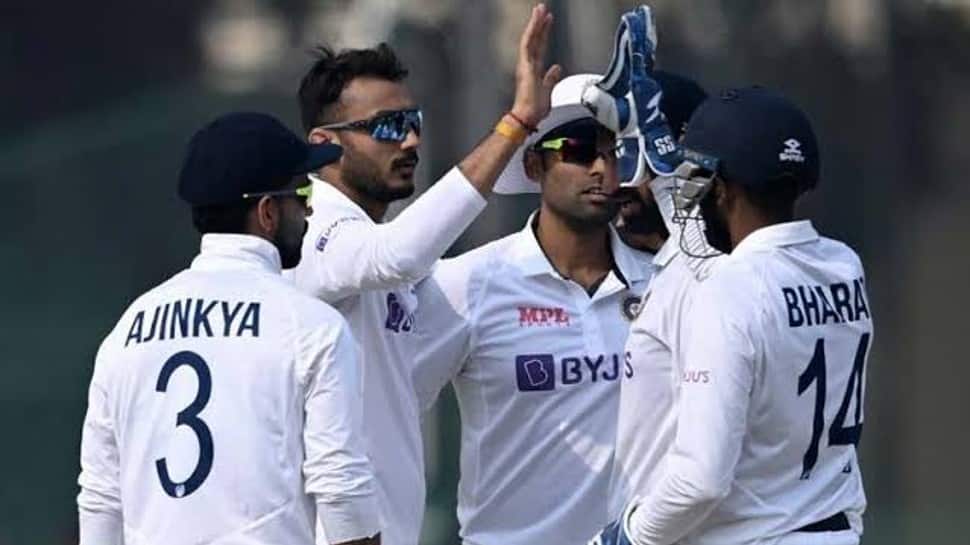 Axar Patel continued his golden run in favourable home conditions, grabbing another five-wicket haul to put India in the driver's seat after New Zealand were bowled out for 296 despite an opening stand of 151 on the third day of the first Test on Saturday (New Zealand).

The left-arm spinner had a couple of dream sessions when he finally found the ideal pace and turn off the surface to completely derail New Zealand's steady first innings. His final figures read 34-6-62-5 as India got a crucial 49-run first-innings lead, which increased to 63 at stumps.

Ravichandran Ashwin was also on the money as he bowled 42.3 overs to finish on 3 for 82, inching closer to becoming the third-highest Indian wicket-taker in Test cricket.

Gujarat man Axar has been terrific since he donned the India whites at the start of the year and now has as many as 32 wickets in just three and half Tests. The five-for was his fifth having already got four in the three Tests against England. However, he will cherish this one a bit more considering that the track was not as diabolical as the ones in the England series (second Test in Chennai and the Pink Test in Ahmedabad).

At stumps, the hosts were 14 for 1 after losing Shubman Gill (1) for the second time to Kyle Jamieson, who again found a gaping hole between his bat and pad. With the deliveries keeping wickedly low, New Zealand's chances of fighting it out in the fourth innings will be pretty low unless skipper Kane Williamson produces one of his steady knocks.

On the day, however, he managed just 18 and when Umesh Yadav's in-cutter brought about his downfall at the stroke of lunch, the wheels of fortune turned in favour of India. This was after openers Will Young (89 off 214 balls) and Tom Latham (95 off 282 balls) added 151 for the opening stand but both, despite their dogged display, missed out on hundreds.

It was the second new ball that did the trick just before lunch as Umesh (1/50 in 18 overs) pitched one on off-stump, which cut back enough to find Williamson's pads. The next two sessions belonged to India as they got eight wickets for just 99 runs.

Axar's perseverance paid off as he changed his line from leg-middle to off-middle and the release was at a greater speed when compared to what he did on the second evening. He removed Ross Taylor (11), Henry Nicholls (2) and Latham within a space of 13 runs to completely upset Black Caps' rhythm. It was in the post-lunch session that Axar finally sent down a classical left-arm spinner's delivery.

There was a delivery that had a bit of air and pitched on length drawing Taylor forward and then turned enough to take an outside edge which went to substitute keeper KS Bharat. Bharat came in after regular stumper Wriddhiman Saha complained of a stiff neck. Nicholls also tried sweeping a much fuller delivery which turned back in and he was found leg before.

Having understood that on a slower track like this one, the pace off the pitch needed to increase, Axar gave it a tweak at a decent clip which saw Latham beaten all ends up. Bharat fumbled before he could effect the stumping. Prior to that, Latham hardly had any lapse of concentration as he played 47 overs of the New Zealand innings.

Later on, Axar got Tom Bundell (13 off 94 balls), who looked to merely survive and finally got a 'shooter' that cleaned his defence. Southee became his fifth victim trying to play inside an arm ball which turned enough to hit the off-stump.

The pitch on the third day didn't change its character as it stayed low and slow but the Indian spinners did better as the time progressed by varying the pace of their deliveries. During the session, Ashwin was seen involved in an animated discussion with umpire Nitin Menon after he decided to come round the wicket against Williamson and cautioned for walking on the dangerous area on his follow-through, which also obstructed the umpire's view.

The intention was to create a few roughs with his bowling spikes in the region. Menon, having understood the motive, had a word with Ashwin and skipper Ajinkya Rahane and after some discussions, normalcy prevailed. Later at the fag end of the day, Ashwin cleaned up the visiting team's tail.

India vs New Zealand: Wankhede to have spectators for 2nd IND vs NZ Test; limit set at 25 per cent of capacity