Virat Kohli-led India won the toss and opted to bat first in the second Test of the ongoing three-match series against South Africa at the Maharashtra Cricket Association Stadium in Pune on Thursday. 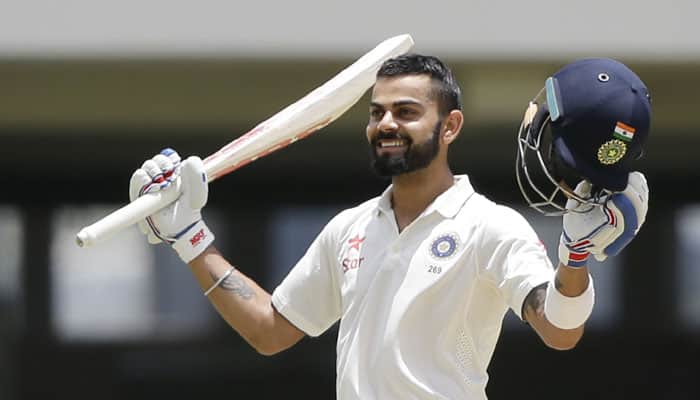 Opener Mayank Agarwal (108) and first drop Cheteshwar Pujara (58) stitched a significant 138-run knock before skipper Virat Kohli notched up an unbeaten half-century to guide India to 273/3 before bad light forced early stumps on the opening day of the second Test of the ongoing three-match series against South Africa at the Maharashtra Cricket Association Stadium in Pune on Thursday.

At sumps, Kohli and Ajinkya Rahane were batting at the crease at their respective scores of 63 and 18.

# FIFTY!! Virat Kohli has brought up his 23rd Test fifty off 91 balls. He reached the mark with a boundary on the fifth delivery of the 81st over by Vernon Philander. Notably, it is Match No. 50 for Kohli as the Indian skipper. India  257/3 (81 overs)

# The second new ball has been taken!

# Good last three overs by South Africa as they conceded just three runs to India. Kohli (27) and Rahane (five) are currently batting at the middle and looking to stitch a partnership after losing Agarwal and Pujara. India 223/3 (75 overs)

# India added another 14 runs off the last four overs. Kohli (24) pulled the first delivery of the 69th over to mid-on's right for a boundary before Rahane flicked the fourth delivery of that over by Nortje through midwicket to get off the mark. India 219/3 (70 overs)

# WICKET! Soon after completing his second Test ton, Mayank Agarwal (109) was caught by skipper Faf du Plessis at first slip on the last delivery of the 61st over by Rabada. The South African bowler has now claimed his third wicket. India 198/3 (61 overs)

# CENTURY!! Mayank Agarwal, who scored a double-hundred in the first match, has brought up another Test hundred off 183 balls. He achieved the mark by notching up boundary on the fourth delivery of the 57th over. It was the Indian opener second Test hundred. India 189/2 (57 overs)

# WICKET!!! Soon after bringing up his Test half-century off 107 balls, Pujara was caught by South African skipper Faf du Plessis  at first slip off the last delivery of the 51st over by Rabada. India 163/2 (51 overs)

# The hosts added 16 runs in the last five overs. While Agarwal is comfortably batting at 78, Pujara (44) is approaching his Test half-century. India are also approaching a 150-run mark, while South Africa are looking to break the second-wicket stand. India 146/1 (48 overs)

# 15 runs off the last four overs, including three boundaries. Pujara (36) smashed the last delivery of the 42nd over by Keshav Maharaj towards deep square leg for four runs before Agarwal (70) notched up two boundaries in the next over by Nortje. India 130/1 (43 overs)

# Mayank and Pujara continue to remain strong at the crease at their respective scores of 61 and 30. India have now crossed the 100-run mark while South Africa are desperately looking for a wicket now. India 115/1 (39 overs)

# FIFTY!! Mayank Agarwal has brought up another half-century off 112 balls. He reached the mark by guiding the fourth delivery of the 34th overthrough point for four runs.India 101/1 (34 overs)

# Mayank Agarwal and Cheteshwar Pujara have settled at the crease and are batting at their respective scores of 23 and 44. The hosts are now approaching a 100-run mark. India 91/1 (29 overs)

# Pujara (19) and Agarwal (34) have brought up a 50-run partnership for the second wicket after opener Rohit Sharma's early dismissal. The duo achieved the mark when Pujara flicked away the third delivery of the 25th over through midwicket for four runs. India 77/1 (25 overs)

#13 runs off the last five overs. Pujara (15) whipped the fourth delivery of the 20th over towards midwicket for four runs before he flicked the very next delivery to the right of mid-on for another boundary. India 70/1 (22 overs)

# The hosts have now started playing freely as they amassed 21 runs in the last four overs. Agarwal (30) smashed Nortje for two back-to-back boundaries before he pulled back third boundary of the 14th over by driving the fifth ball through extra cover. Pujara, on the other hand, came forward and pushed the fifth delivery of the 17th over through covers to get off the mark with three runs. India 57/1 (17 overs)

# India added 11 runs off the last three overs. Pujara is yet to open his account while Mayank Agarwal is currently cautiously batting at the crease at 13. India 36/1 (13 overs)

# WICKET! Kagiso Rabada gave an early breakthrough to South Africa by removing Rohit Sharma for 14. The Indian opener got an outside edge on the last delivery of the 10th over and the ball went straight to Quinton de Kock behind the stumps. India 25/1 (10 overs)

# Anrich Nortje comes into the attack!

# 11 runs off the last four overs. Agarwal (7) fended off the third delivery of the third over by Rabada between third slip and gully to notch up first boundary of the match. However, the Indian opener survived a scare when South Africa made a huge leg before wicket appeal against him in the fifth over. The replays showed that ball would just nick the stumps. India 13/0 (5 overs)

BIG SHOUT!
Big Vern gets one to nip back and strikes the pad. The umpire says not out, but Faf takes it upstairs. Replays show it would just nick the stumps, so we stay with umpires on-field call of not out.

This pitch is looking like it will give the seamers some assista ... pic.twitter.com/BXdsLx0lak

# Kagiso Rabada to share the new ball from the other end!

Opening the bowling on the other end will be Kagiso Rabada.

# Just two runs off the very first over. Mayank Agarwal got off the mark when he tucked the first ball off his pads straightaway into square leg for a single, while Sharma got a thick outside edge off the third delivery and the ball rolled past gully for one run. India 2/0 (1 over)

# Rohit Sharma and Mayank Agarwal have walked down the crease to begin India's first innings. Vernon Philander to open the attack for South Africa.

# Both sides have made one change each in their Playing XI. While India have brought in Umesh Yadav in place of Hanuma Vihari, South Africa have replaced  Dane Piedt with Anrich Nortje.

India have won the toss and elected to bat.

There is 1 changes from the team that played in the 1st Test with Anrich Nortje replacing Dane Piedt in the lineup.

Massive day for Nortje as he makes his Test Debut for the Proteas.#ProteaFire #INDvSA pic.twitter.com/EgKbSSt9sw

Having registered a crushing 203-run win over South Africa in the opening Test in Visakhapatnam, Virat Kohli-led India will look to continue their winning momentum and seal the three-match series with a game to spare when the two sides head into the second match.

The first match saw India dominate South Africa in all departments. Rohit Sharma marked his debut in a Test match as the opener with two double centuries--176 and 127.

En route to his centuries, Sharma smashed a number of records like becoming 1st Indian batsman to score tons in all three formats as opener, fourth batsman from the country to score a century while opening the innings for the first time in Tests and second Indian batsman after former Indian skipper Rahul Dravid to notch up six straight fifty-plus scores on home soil.

South Africa, on the other hand, will be keen to bounce back and win the second match in order to keep themselves alive in the series.

Notably, the second Test between India and South Africa will also mark Kohli's 50th match as the Test captain.