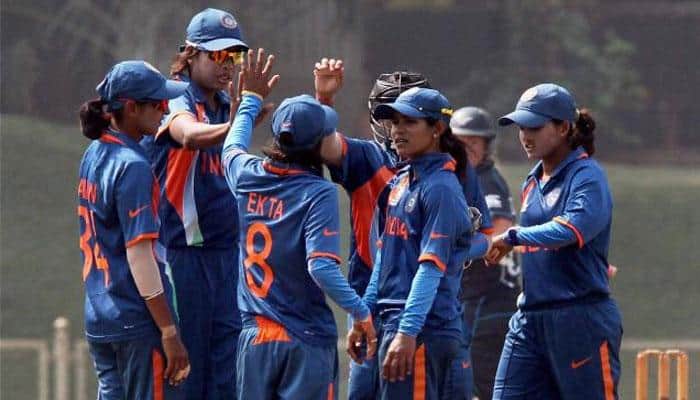 Deepti Sharma displayed a phenomenal form as she bowled three maiden overs out of four and took three wickets.

With this victory, India women have gained a 1-0 lead over the visitor in the five-match T20I series.

Chasing a target of 131 runs, South Africa women had an impeccable start as they scored 18 runs off the first over with Lizelle Lee smashing three boundaries in the over.

Lee hit another boundary in the next over but Shikha Pandey bowled her on the last delivery of the over, ending her 16-run innings.

Deepti Sharma also bowled brilliantly as she dismissed Tazmin Brits and Nadine de Klerk in the fifth over, putting the visitors under immense pressure.Mignon du Preez and Laura Wolvaardt were the next batters.

Poonam Yadav bowled a similar over as that of Sharma, clinching two wickets in an over.

Poonam Yadav dismissed Wolvaardt (14) and Sune Luus (0). Nondumiso Shangase took the field following Luus` dismissal but failed to give her side a momentum as Kaur sent her back to the pavilion.

Shabnim Ismail then accompanied De Preez out on the field but the former only managed to add six runs to the board before she was stumped off Deepti Sharma`s delivery.

Ayabonga Khaka and Du Preez played cautiously to help the sinking South Africa side. However, Khaka was bowled by Pandey. But Du Preez did not lose hope and played fearlessly to complete her half-century.

Tumi Sekhukhune joined Du Preez and the match get to a point when South Africa needed 18 runs from six balls.

After smashing a six on the first ball of the final over, Du Preez was dismissed, on the fourth delivery, after scoring 59 runs. Radha Yadav then took the wicket of Nonkululeko Mlaba to help India register an 11-run victory.

Earlier, after being sent to bat first, India had a poor start as the 15-year-old debutant Shafali Verma was dismissed on a duck by Shabnim Ismail in the first over of the innings.

Opener Smriti Mandhana was then accompanied by Jemimah Rodrigues on the field. Both Mandhana and Rodrigues struck regular boundaries. In the sixth over, Mandhana struck two back to back boundaries to Nondumiso Shangase but the latter made a comeback and took the wicket of Mandhana (21).

Skipper Harmanpreet Kaur was the next batter but failed to form a partnership as Rodrigues (19) was sent back to the pavilion by Tumi Sekhukhune in the 10th over.

Deepti Sharma came out to bat and took India women past 100 runs along with Kaur. Nadine de Klerk came out furiously in the 16th over and dismissed both Sharma (16) and Kaur (43). Kaur was given LBW while Sharma was caught by Lizelle Lee.

Veda Krishnamurthy and Pooja Vastrakar were the next batters but the latter was run out in the 18th over, after scoring just one run. South Africa women continued their brilliant form with the ball and restricted India to 130 runs.The second T20I between India women and South Africa women will be played on September 26.