The Indian women cricket team defeated England by 66 runs in the opening ODI of the three-match series at Wankhede Stadium in Mumbai on Friday. 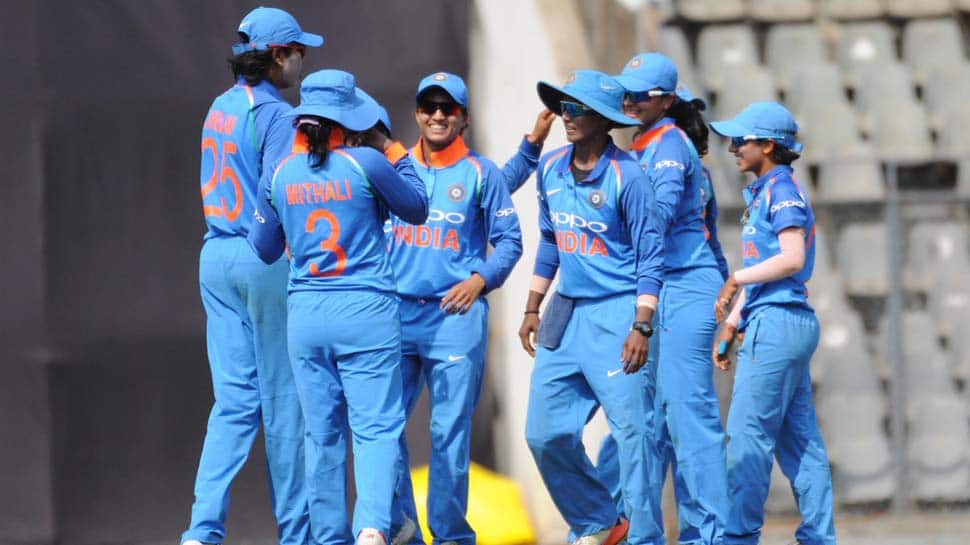 The Indian women cricket team defeated England by 66 runs in the opening ODI to take a 1-0 lead in the three-match series at Wankhede Stadium in Mumbai on Friday.

After being asked to bat first, India were bowled out for 202 runs in 49.4 overs. Jemimah Rodrigues (48) and Smriti Mandhana (44) were the top scorers for the Women in Blue.

In reply, England also struggled to build partnerships and were eventually bowled out for 136 runs in 41 overs.

Ekta Bisht was the pick of the bowlers for her figures of four for 25. Deepti Sharma and Shikha Pandey bagged two wickets each while Jhulan Goswami also chipped in with a wicket.

We defeat England Women by 66 runs in the 1st ODI

Three wickets for Ekta Bisht in the 40th over

We take a 1-0 lead in the three match ODI series #ENGvIND pic.twitter.com/80GC4MxKqR

#Wicket! Deepti bowls a good delivery outside off and Wyatt drags it high to hand a clean low catch to Ekta ay long-on.The England batwoman depart for just one run. England 114/5 (35 overs)

# Danielle Wyatt is the new batwoman for England!

# Wicket! Sciver fell just six runs short of a half-century. The England batter was almost running before skipper Knight played the shot off Ekta Bisht's delivery. As the ball was slow, Sciver backed-up but Bisht didn't miss the opportunity and ran her out.England 114/ 4 (31 overs)

# Knight (27) and Sciver (39) are looking solid at the crease and slowly and steady guiding England close to the target. India, on the other hand, desperately need to bag some quick wickets in order to turn the game in their favour. England 104/3 (29 overs)

# Just six runs off the last two overs. The Indian bowlers continue to pile pressure on England and are avoiding conceding easy runs to them. The visitors require 125 more runs from 26 overs to win the match. England 78-3 (24 overs)

# England added eight runs in the last two overs. Sciver (11) and Knight (13) are looking settled at the middle and looking to steady Englands innings after losing the first three wickets in quick successions. England 62-3 (19 overs)

# Wicket! Beaumont attempted to play the slog-sweep to a tossed up off-break delivery from Deepti Sharma, but got a fat top-edge ato hand a simple catch to Poonam Yadav. England 42-3 (14 overs)

# Ekta Bisht introduced into the attack!

# Wicket! Shikha strikes again. The Indian bowls a good length delivery and Taylor--who was a bit down the track-- looks to nudge it to the on-side, only to see the ball struck in front of leg to depart for 10 runs. England 27-2 (10 overs)

# India bowled tight last two overs. While Goswami conceded just a single run to Beaumont in the third ball of the fifth over, Shikha Pandey gave away just one run each to Beaumont and Taylor. England require 185 more runs to win from 44 overs. England 18-1 (6 overs)

# Sarah Taylor is the new batswoman in!

# Wicket! Shikha Pandey gives the breakthrough to India as early as in the second over. Jones was caught leg before wicket off the fourth delivery of the second over to depart for one run. England 5/1 (1.4 overs)

# Tammy Beaumont and Amy Jones to begin the chase for England while Jhulan Goswami opens the attack for India.

# Ekta Bisht comes to the crease for India!

# Wicket! Jhulan Goswami hit a length ball from Shrubsole in front of mid-wicket and took a couple of steps, prompting Shikha to come forward only to run out for 11 runs. India 189-8 (48 overs)

# Nine runs off the last three overs as India look to take their total past 200 runs with just five overs left in hand. The England bowlers, meanwhile, are eyeing to restrict the hosts' innings inside 200-run mark. India 174-7 (45 overs)

# Shikha Pandey comes to bat for India. Sophie Ecclestone returns into the attack.

# Wicket! Indian skipper Mithali Raj fell just six runs short of a half-century after being caught leg before wicket off Elwiss'delivery. The England player bowled a length delivery and at the stumps as Mithali played the shot right across the line, only to get struck bang in front of middle. India 165-7 (42 overs)

# Jhulan Goswami is the new batwoman in!

# Wicket! England have bagged a huge wicket in the form of Taniya Bhatia. Mithali taps the delivery from Alex Hartley towards mid-wicket as Taniya runs to take a single only to get out for 25 by Sciver. India 150/6 (38 overs)

# Mithali and Taniya are looking settled at the crease and are batting at their respective scores of 31 and 19 as India approach a 150-run mark. England, on the other hand, are eyeing to break their partnership in order to restrict India to a lowly total. India 140-5 (36 overs)

# Ecclestone conceded four runs to India before Alex Hartley bowled a tight 30th over to give away just a single run. The England bowlers continue to pile pressure on India, while Mithali and Taniya are looking to bring India back on track after losing four wickets quickly. India 120-5 (30 overs)

# 10 runs off the last three overs for India, including a boundary in the 27th over. Ecclestone bowls a rare bad delivery and Taniya slapped the ball past cover-point which runs away to the fence for four runs. India 115-5 (28 overs)

# India look in trouble now as they lost two more wickets in quick successions. Harleen Deol, who was handed her maiden ODI cap after Harmanpreet Kaur was ruled out due to an injury, failed to make it a memorable one as she was caught for two runs by Amy Jones off  Sciver's delivery at slip. Mona Meshram, meanwhile, was trapped in front by Sciver for a second-ball duck. India 100-5 (23 overs).

# Mithali Raj and Harleen Deol are currently batting at the crease.

# Wicket! Deepti Sharma and Rodrigues depart in quick successions. While Deepti was stumped by wicketkeeper Sarah Taylor  off Sophie Ecclestone's delivery in second ball of the 19th over, Rodrigues fell just runs short of half-century after she got a leading edge to hand ball back to Ecclestone for an easy caught-and-bowled. India 92-3 (20.1 overs)

# Wicket! Elwiss gives the much-needed breakthrough to England by dismissing Mandhana for 24 runs. The Indian opener played the first ball of the 16th over a fraction too early and hit it back onto her leg-stump. India 69-1 (15.1 overs)

# Mandhana and Rodrigues have brought up a 53-run stand for the opening wicket to help India cross the half-century mark. England, meanwhile, have made two changes in their bowling attack. Right-arm medium pacer Georgia Elwiss and  Natalie Sciver called into the attack as visitors look to break India's opening stand. India 53-0 (12 overs)

# Mandhana (17) and Rodrigues (26) are looking settled at the crease and bringing in runs at a good pace as India are quickly approaching towards the 50-run mark. England, on the other hand, are desperately in search of a breakthrough. India 45/0 (10 overs)

# 16 runs off the last two overs. While Mandhana reached the double figure with a boundary in the seventh over, Shrubsole was smashed by Rodrigues with back-to-back boundaries off her legs in the eighth over. India 27-0 (8 overs)

# Just a single run in the last two overs. Rodrigues added another run to her account by notching a single off her legs to bring her opening partner Smriti Mandhana on strike for the very first time.

# Indian women make a slow start to their innings, adding just one run off the very first over. Rodrigues gets off the mark with just a single off the last ball as Brunt bowls a good tight first over. India 1-0 (1 over)

# England have won the toss and opted to bowl first in first ODI against India!

We have won the toss and will bowl first: https://t.co/xGrH5NGqzs#INDvENG pic.twitter.com/KFyWQ7MPpl

Time for the action to begin!

The aggressive Harmanpreet Kaur's injury-forced absence is likely to be felt but a confident Indian women's cricket team will look to make the home advantage count when they square off against England in a three-match ODI series starting in Mumbai on Friday.

Fresh from a decent outing in New Zealand, where the team won the ODIs but were blanked 0-3 in T20 Internationals, the Indian team continues its ICC Championships engagements.

The team has to hold on to its position in the top-four of the world rankings till 2020 to get direct qualification for the 2021 World Cup.

All the three matches will be played at the Wankhede Stadium and India would be firm favourites. The Mithali Raj-led outfit had beaten England 2-1 the last time the visitors were here, in 2018.

Raj, whose position in the T20 squad has created quite a bit of controversy in the past few months, is still at the top of her game in the 50-over format. The 36-year-old became the first woman cricketer to play 200 ODIs for India during the tour of New Zealand a few weeks back.

However, the hosts will miss her regular deputy and T20 captain Harmanpreet, who was ruled out of the entire series with an ankle injury. She has been replaced by Harleen Deol.

Although Harmanpreet was off-colour during the series against New Zealand, she remains crucial for India in its new-found aggression.

But ICC's woman cricketer of the year Smriti Mandhana and the young and sprightly Jemimah Rodrigues can be banked upon to provide the requisite spark. Mandhana, especially, was in top form in New Zealand and would be aiming to continue the fine run.

The team has had middle-order issues in the past and newly-appointed coach W V Raman would be keen to sort those out.

The home team's bowling has an all-around look with the pace attack being led by redoubtable veteran Jhulan Goswami and also comprising the likes of Shikha Pandey and Mansi Joshi.

With spin being a key element on Indian wickets, the role of slow bowlers Deepti Sharma, Ekta Bisht and Poonam Yadav in the middle overs would be crucial.

The England women, on the other hand, are no pushovers in the 50-over format. They have experienced campaigners in top-order batting, such as Danni Wyatt (746 runs in 61 matches) and 28-year-old Heather Knight.

Knight, with 2,331 runs to her credit in 86 ODIs, displayed good form in the practice game against the Board Presidents XI and would be expected to anchor the innings for the visitors.

With all-rounders like Sophie Eccelestone, experienced pacer Anya Shrubsole and accurate medium pacer Nat Sciver in the mix, England have the bowling attack to trouble the hosts.

Anya would also take confidence from her four-wicket haul in the warm-up game.