The Indian women's cricket team defeated England by seven wickets in the second ODI at Wankhede Stadium in Mumbai on Monday. 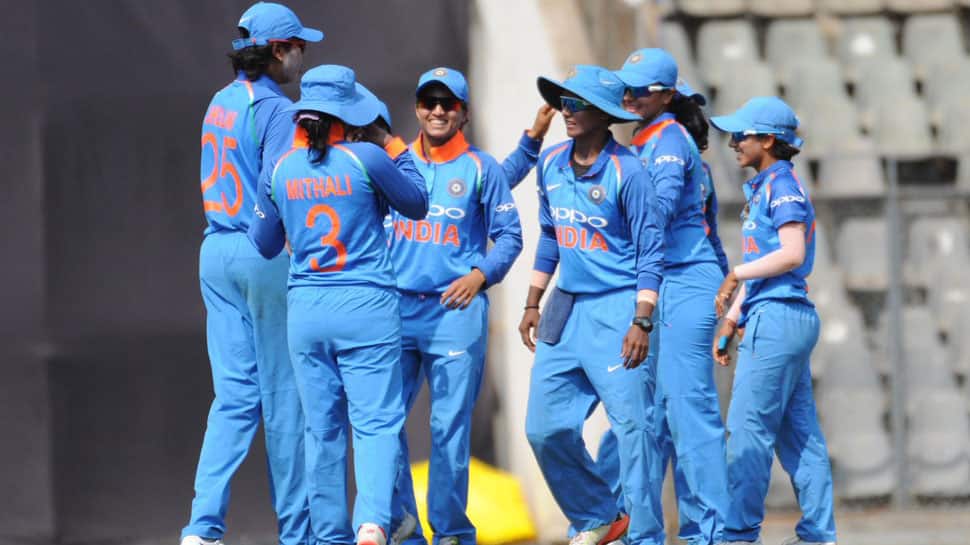 The Indian women's cricket team defeated England by seven wickets in the second ODI at Wankhede Stadium in Mumbai to clinch the three-match series on Monday.

After being asked to bowl first, Jhulan Goswami and Shikha Pandey bagged four wickets each to help India bundle out England for 161 runs in 41.1 overs. Meanwhile, Poonam Yadav also chipped in with two wickets.

Natalie Sciver was the highest scorer for Australia with a blistering knock of 85 runs off 109 balls.

In reply, Smriti Mandhana (63) notched up his 15th ODI half-century while Mithali Raj and Punam Raut contributed 47 and 32 runs, respectively to help India chased down the target with 53 balls to spare.

# Deepti Sharma is the new batwoman in!

# Wicket! Mandhana's impressive innings finally come to an end after she was caught leg before wicket off Shrubsole's slower ball angling inwards. The Indian opener departs for 63. India 140/3 (34 overs)

# Mandhana brings up his 15th ODI fifty off just 59 balls. She achieves the feat by comfortably pulling a delivery from Ecclestone to deep backward square for four runs. Mandhana is now tied with Anjum Chopra with 19 scores of 50 or more. India 112/2 (29 overs)

# India have added 17 runs in the last three overs, including two boundaries from Raj. Mandhana is standing strong at the middle as she is approaching a half-century while looking for support from Raj. The Women in Blue now require 61 more runs from 24 overs. India 101/2 (26 overs)

# Wicket! England have bagged a big wicket in the form of Punam Raut (32). Elwiss bowled a wide delivery down the leg side, prompting Raut to step out of the crease and allowing Taylor to take the bails off. India 75/2 (20 overs)

# Sciver conceded five runs to England before Ecclestone bowled an impressive tight over to give away just two runs to the Indians. Raut (26) and Mandhana (32) are keeping the scoreboard ticking at a good pace while England are still in search of wickets. India require another 94 runs from 32 overs. India 66/1 (17 overs)

# Five runs off the last two overs. The Indian batwomen have brought up a half-century stand to guide the home side past 50-run mark. The England bowlers now need to buck up and break this partnership in order to avoid India chase down the target easily. India 59/1 (15 overs)

# Runs are coming in at a good pace for India. Mandhana (23) and Raut (16) are looking decent at the moment and slowly and steadily moving India towards the target. The Women in Blue require 116 runs from 40 overs to clinch the series. India 46/1 (10 overs)

# 11 runs off the last three overs, including two boundaries. Mandhana (11) and Raut (10) are looking settled at the middle and hoping to stitch a good partnership after losing Rodrigues early. England, on the other hand, need to bag some quick wickets in order to turn the game in their favour. India 28/1 (7 overs)

# Wicket! Shrubsole gives a breakthrough to England as early as in the second over. Rodrigues defends a full delivery on off-stump towards the leg side, but got the leading edge to hand Jones a stunning catch at cover. India 1-1 (2 overs)

# Jemimah Rodrigues and Smriti Mandhana have walked down the crease to begin India's chase. Katherine Brunt to open the proceedings for England.

# India bundle out England for 161 runs!

#  Sciver (81) is going strong and waging a lone war for England while Hartley is yet to open her account. With just seven overs left, the England batswomen are hoping to continue batting and add as many runs as possible. India, meanwhile, are keen to wrap up the visitors' innings as quickly as possible in order to set themselves a small target to chase. England 157/9 (43 overs)

# Wicket! Goswami is on a roll today as she bowled out Ecclestone for five runs. England are now just one wicket away from being bundled out, with Sciver (46) and Alex Hartley (0) currently batting at the crease. England 119/9 (36 overs)

# Wicket! Poonam Yadav strikes for India. The Indian bowler delivers a googly and trapped Shrubhsole her plumb in front. The England batwoman departs for one run. England 108/8 (32 overs)

# Wicket! Blow for England as they lost two wickets in quick successions. Georgia Elwiss and Katherine Brunt went back to pavilion for duck after being caught by Shikha Pandey in the 29th over. England  95/7 (29 overs)

# Wicket! Poonam Yadav bowls a delivery outside off and Winfield ends up dragging it straight down deep midwicket to hand a simple catch to Smriti Mandhana. England 94/5 (28 overs)

# The visitors have added 9 runs off the last two overs, including two boundaries. Sciver (27) and Winfield (27) are looking settled at the middle and have stitched a little partnership here. India, on the other hand, are keen to grab some more wickets quickly in order to restrict England to a low total. England 90/4 (25 overs)

# Just eight runs off the last two overs. Sciver (17) and Winfield (6) are looking to steady ship for England after some quick wickets. The Indian bowlers, on the other hand, are continuing to pile pressure on the visitors and avoiding conceding easy runs. England 59/4 (19 overs)

# Wicket! England look in trouble now as they lost Beaumont for 20 runs. The England opener attempted to slog sweep a Shikha Pandey delivery but got a top edge as Deepti  Sharma ran towards the boundary from square leg to take a full-stretched catch. England 44/4 (13.3 overs)

# Nine runs off the last two overs, including two boundaries. Beaumont smashed Deepti for back-to-back boundaries by first lifting a shot over the fielder at mid-on before playing a delicate late cut past first slip. England 39/3 (11 overs)

# Deepti Sharma introduced into the attack.

# Wicket! Goswami strikes again. The Indian bowls a full delivery just outside off and the ball hits top half of Knight's the bat to go straight to Rodrigues at short cover. The England batwoman departs for two runs. England 14/3 (6.1 overs)

# Skipper Heather Knight is the new batswomen in!

# Wicket! India have bagged a big wicket in the form of Sarah Taylor. Goswami delivers a ball too wide outside off and as Taylor (1) looks to drive, the ball takes the inside of her bat before crashing into middle and leg. England 11/2 (4.3 overs)

# Sarah Taylor is the new batsman in!

# Wicket! Shikha Pandey gives the breakthrough to India as early as in the second over of the match. Jones (3) flicks the final delivery of the second over with the inswing, only to see the ball going straight to Ekta Bisht at square leg. England 5/1 (1.6 overs)

# Four runs off the very first over. Jones gets off the mark by smashing Goswami's first delivery away to midwicket's right for two runs, while Beaumont hits a length ball outside off towards backward square for a single. England 4/0 (1 over)

# Amy Jones and Tammy Beaumont to begin the innings for Australia. Jhulan Goswami opens the attack for the hosts.

# Both sides have made just one change in their PLaying XI. While Laura Winfield replaces Danielle Wyatt for England, India recall Punam Raut for Harleen Deol.

# England have won the toss and opted to bat first!

Their tails up after a morale-boosting win in the opener, a confident Indian women team would look to seal the three-match series against world champions England when they meet in the second cricket ODI here on Monday.

India women couldn't have asked for a better start to the series, defeating the current world champions by 66 runs in the opener at the Wankhede Stadium on Friday.

The win not only gave a fillip to their confidence but also enabled India grab crucial two points in the ICC Women's Championship as the race for securing direct qualification spots for the 2021 World Cup heats up.

India need to hold on to its position in top four of the world rankings till 2020 to get a direct berth in the 2021 World Cup and in this context, a second successive victory on Monday would do a world of good for the hosts.

The hosts have a lot of positives to take from the win, especially the clinical performance of its bowling unit led by left-arm spinner Ekta Bisht.

Bisht starred with the ball with figures of 4 for 25 as Indian spinners made England dance to their tunes.

England batswomen struggled in the middle overs as they failed to counter the variety provided by Bisht, leg-spinner Poonam Yadav and off-spinner Deepti Sharma (2/33).

On the batting front, young opener Jemimah Rodrigues has been in fine touch while Smriti Mandhana, who made 24, would be looking to make up for the lost opportunity in the series opener.

Skipper Mithali Raj, who made 44 and is still going strong in the 50-over format, is the backbone of India's batting line-up but she would look for support from the likes of Deepti Sharma, Mona Meshram and young Harleen Deol, who got a chance in place of injured Harmanpreet Kaur.

Going into Monday's game, the only cause of concern for India is that they frittered away a good start provided by openers Jemimah and Mandhana. The duo shared 69 runs for the first wicket to set the platform for a big score.

But the middle-order fumbled and it was then left to Mithali and wicket-keeper Tania Bhatia (25) and later Goswami (30) to do the resurrection work.

Stunned by the defeat, England is expected to come out strongly to remain in the hunt and keep the series alive.

But the real challenge for England would be to figure out how to deal with India's spin trio in helpful conditions.

Skipper Heather Knight is leading from the front but she needs support from the likes of Danni Wyatt, Sarah Taylor and Tammy Beaumont.

All-rounder Natalie Sciver too had a good outing with both bat and ball in the last game.

England's bowling, on the other hand, has been impressive and the visitors have the firepower in Sciver, Sophie Eccelestone, Georgia Elweiss and experienced pacer Anya Shrubsole to trouble the Indians.