A terrific all-round performance from RCB powered them to a huge 82-run win over KKR. De Villier's 73* had powered RCB to a handsome 194/2. In reply KKR could only muster 112/9 against the RCB bowlers. 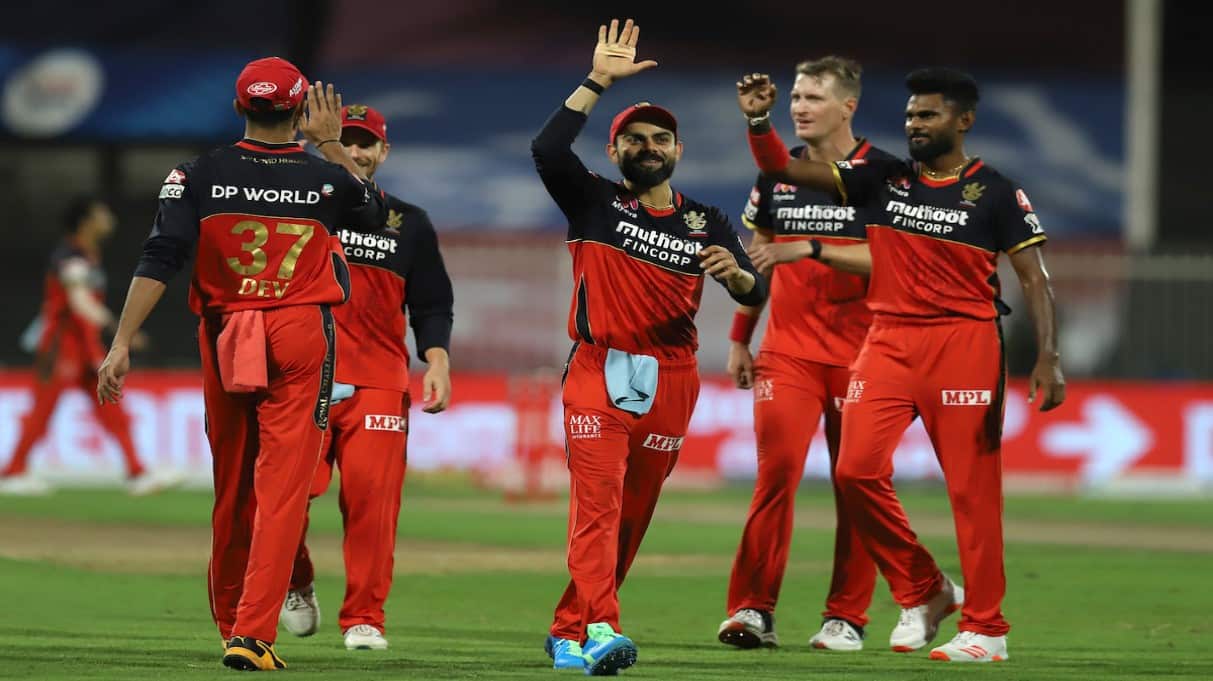 Chasing RCB’s handsome total of 194, KKR folded up for a paltry 112/9 from their allotted 20 overs. KKR management went in with a different opening pair – sending Shubman Gill alongside debutant Tom Banton to open the innings.

The gamble didn’t pay off as Banton was bowled by Navdeep Saini off a 148 kph scorcher in the fourth over for just 8 runs. Nitish Rana followed soon, getting bowled by Washington Sundar with the run-rate mounting.

Shubman Gill looked good in his innings of 34 (off 25 balls; 4x3, 6x1) but was unfortunate to get run-out. With the run-rate already soaring, the RCB spin duo Yuzvendra Chahal and Washington Sundar turned the screws on the KKR batsmen with a tremendous display of spin bowling.

Chahal sent the KKR skipper Dinesh Karthik back to the pavilion for 1 with Eoin Morgan joining him soon – losing his wicket to Sundar.

Yuzvendra Chahal bowled a miserly spell of 4-0-12-1. To give away just 12 runs from his four overs on the short ground at Sharjah was a testament to Chahal's mastery over his craft.

Washington Sundar continued his brilliance in the tournament as he returned wonderful figures of 4-0-20-2. KKR batsmen could do nothing against the wily off-spinner.

Andre Russell and Rahul Tripathi flattered to deceive in their short stays at the crease respectively. Chris Morris winded up the tail to complete an emphatic victory for RCB.

Earlier, Virat Kohli had won the toss and opted to bat first. The decision proved unerring as RCB opener Aaron Finch (47 off 37 balls) and Devdutt Padikkal (32 off 23 balls) stitched a crucial 67-run stand for the opening wicket.

Finch and Padikkal’s dismissal brought the seasoned duo of Virat Kohli and AB de Villiers to the crease. The two star players started steadily and then threw the kitchen sink at it.

With the runs drying up in the middle overs, AB de Villiers rose to the occasion and came up with the big shots as he took all KKR bowlers to the cleaners. With his frenzy of power-hitting, he reached his fifty of just 23 balls.

Virat Kohli played second fiddle to him but was clever enough to give the majority of the strike to the red-hot South African.

The duo also completed an astonishing 3000 runs together in the IPL – more than any other pair.

De Villiers was awarded the man of the match for his tremendous effort.

With the win, RCB have reached the third position in the points table with an impressive five wins from seven games.