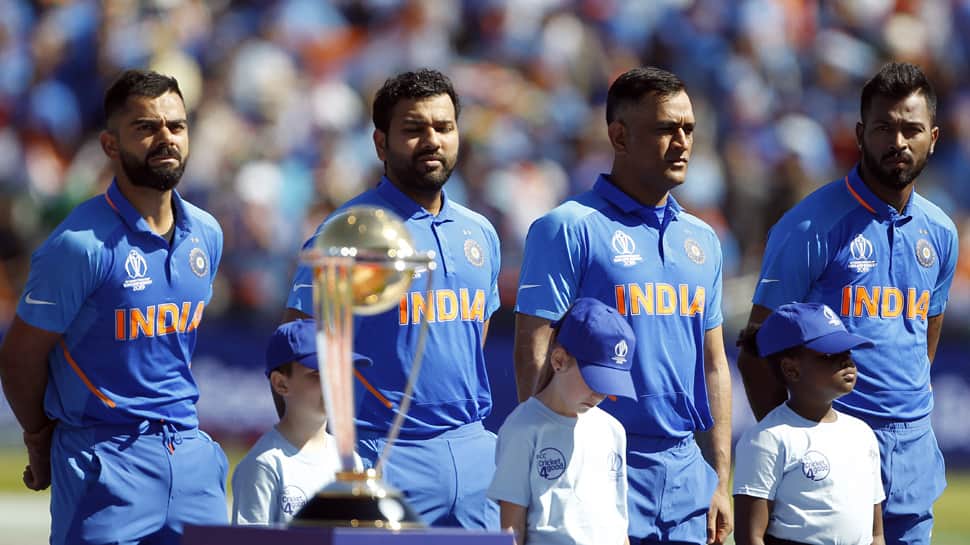 Virat Kohli-led India will take on New Zealand in the first ICC World Cup 2019 semi-final at Manchester's Old Trafford on July 9. Batting is India's strength and the team has had the most promising journey in the tournament with just one loss against England in the league stage while the match against New Zealand was washed out due to rains.

India's top order has been in great form since their first World Cup 2019 encounter against South Africa but the middle order has brittle on several occasions. However, with opener Rohit Sharma topping the charts of the highest run scorers, India's batting can blow away any attack. On the bowling front, Jasprit Bumrah, Mohammed Shami and Yuzvendra Chahal are some of the bankable performers.

Rohit Sharma, Virat Kohli, KL Rahul and MS Dhoni are India's top batsmen in the World Cup so far. Here's looking at their performances so far:

The 'Hitman' Sharma scored his first century against South Africa and is currently the only batsman to score 5 centuries in a single World Cup edition. Rohit scored an unbeaten 122 runs off 144 balls in the match against the Proteas. While the fans feared the encounter with the top team Australia, a raging Rohit (117) maintained a great partnership with Shikhar Dhawan (57). However, he wreaked havoc on the field in the match against arch-rival Pakistan when he signed off with 140 runs off 113 balls. It was only against Afghanistan that Rohit went back to stands pretty early. Rohit scored his fourth century against Bangladesh where he knocked off 104 in 92 balls. He continued his streak in the match against Sri Lanka, in which he rewrote the record books by becoming the only batsman to score five centuries in a World Cup.

Captain Virat Kohli scored 441 runs in the current World Cup till now. While Rohit Sharma is the ultimate king of centuries, Kohli had managed to record a streak of five half-centuries in the tournament. He went on to become the fastest to reach the 20,000-run mark and broke the long-standing record held jointly by Sachin Tendulkar and Brian Lara. Kohli has been performing decently in the tournament so far. After a dismal show against South Africa, Kohli scored 82 against Australia, 77 against Pakistan and 67 against Afghanistan.

The ICC World Cup 2019 is KL Rahul's first ever World Cup campaign. He has put up a total score of 359 in the tournament with two half-centuries and a smashing century (111 runs off 118 balls) in India's last league match against Sri Lanka. In the high-octane clash with Pakistan, Rahul smashed two sixes and three fours to score 57 off 78 balls. Against Bangladesh, Rahul played 92 balls to score 77 runs.

Former captain MS Dhoni, who is most likely playing his last ICC World Cup, has scored 223 runs so far in the tournament. Knowing for his batting prowess, Dhoni has scored one half-century against West Indies and is yet to score a century in the ongoing World Cup. The 2019 edition is his fourth World Cup overall. He was massively criticized for his inability to score at a brisk pace in some of the matches and for failing to hit fours and sixes during India's clash with England. While India prepare to take on New Zealand in the semi-finals, fans are desperately hoping to see their idol finish off in style.

Jasprit Bumrah has taken a total of 17 wickets in the ongoing edition of ICC World Cup. He is placed third on the wicket-takers list. Mitchell Starc from Australia and Mustafizur Rahman of Bangladesh occupy the first and second spot respectively. In India's first World Cup 2019 encounter against South Africa, Bumrah took two wickets while in the match against Australia, he claimed three wickets. After India's clash with Sri Lanka, Bumrah became the second fastest Indian to complete 100 wickets in one-day international cricket. He has been the go-to bowler for Kohli in crunch situations and has invariably delivered by not only choking the run-flow but by picking up crucial wickets.

Mohammed Shami has taken a total of 14 wickets in the World Cup 2019. During India's clash against West Indies, Shami led the bowling attack as he claimed four wickets. While during the India-England clash he clinched five wickets. He took a hat-trick in the last over against Afghanistan, a match here the Indian batsmen performed below par, to take his team to an 11-run victory. Shami, who was rested during the Sri Lanka clash is expected to be in playing XI when India takes on New Zealand in the semi-finals.