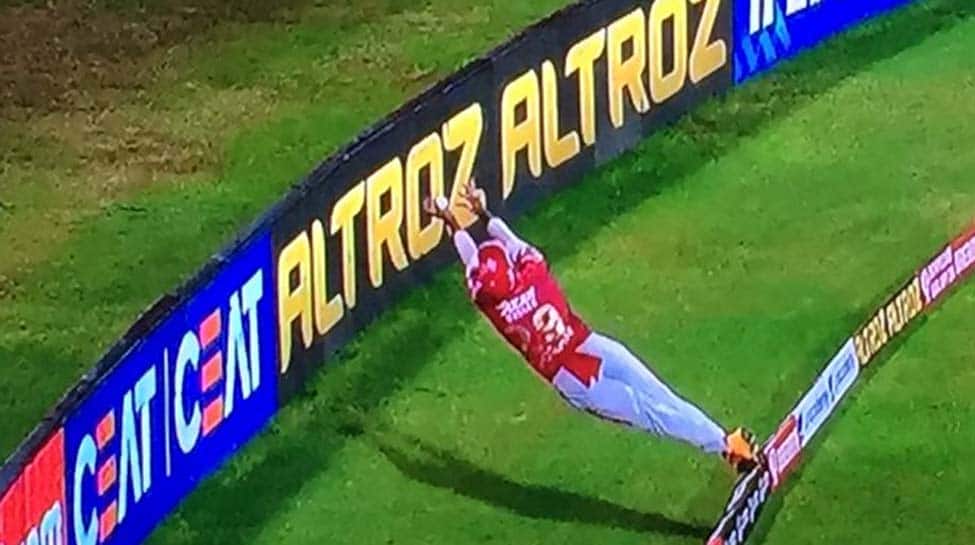 In the eighth over, Pooran, at deep mid-wicket, dived full length over the rope to catch the ball. He was stretching to the maximum possible and then he caught the ball with his left hand. And, a millisecond before falling onto the ground, he flicked the ball back into play and Rajasthan had to settle for just two runs.

Chasing a mammoth total of 224, Sanju Samson played a pull shot off Murugan Ashwin and picked two runs as Pooran saved four runs for his side.

Taking to Twitter, Tendulkar wrote, "This is the best save I have seen in my life. Simply incredible!!"

This is the best save I have seen in my life. Simply incredible!! #IPL2020 #RRvKXIP pic.twitter.com/2r7cNZmUaw

The video of Pooran's gravity-defying save has gone viral on social media. Take a look at the clip below:

Earlier, Mayank Agarwal`s maiden IPL ton guided the side to 223/2 in their allotted twenty overs.

Previously, Adam Gilchrist and Paul Valthaty had the record of the highest opening stand for KXIP. They had 136 runs for the opening wicket against Deccan Chargers (now SunRisers Hyderabad) in Hyderabad.

Agarwal played a knock of 106 runs off 50 balls including seven sixes and 10 fours. He was dismissed by Tom Curran in the 17th over.

In the next over, Rahul too departed after scoring 69 runs with a striker rate of 127.77. He was scalped by Ankit Rajpoot.

Glenn Maxwell and Nicholas Pooran played some good hand in the last overs and remained unbeaten on 13* and 25* runs respectively.