Kolkata will face Hyderabad in the virtual semifinal round on May 25. 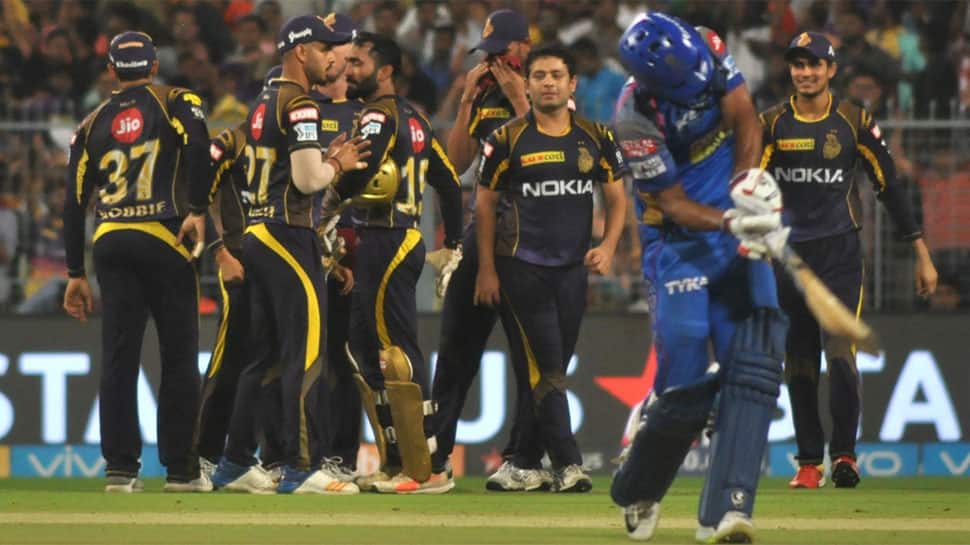 On a day KKR star spinner Sunil Narine was expensive and returned wicket-less, the likes of Piyush Chawla, Prasidh Krishna and Kuldeep Yadav stepped up to restrict RR 144 for four after batsmen put on board 169 for seven.

Home skipper Dinesh Karthik and Andre Russell had revived KKR with their magnificent batting as the hosts recovered from a disastrous start. They had their worst start of the season with K Gowtham (2/15) and Jofra Archer (2/33) reducing them to 46 for three inside the Powerplay overs.

Karthik continued his sublime form to lead them to safety with a 38-ball 52, containing four fours and two sixes while Russell came up with his destructive 29-ball unbeaten 49, studded with three boundaries and five sixes to propel the side to a fighting total.

RR began their chase in right earnest with Rahane (46 off 41) and Rahul Tripathi (20) adding 47 runs for the first wicket. Sanju Samson played a smart inning of 50 runs from 38 balls but leg-spinner Piyush Chawla removed Tripathi and Samson to tilt the match in the hosts' favour.

Rahane batted too slow, playing a lot of dot balls, and the asking rate kept mounting. When Rahane departed it was tough ask for the batsmen at the crease. Rahane got 22 runs from five boundaries but consumed 36 balls for remaining 24 runs.

Kuldeep foxed the RR skipper with a googly, before Chawla removed an anxious Samson in his last over.

Their equation was still within reach with 43 runs and seven wickets in hand in last three overs but the young pacer Krishna gave away just three runs in the 18th over to tilt the match in their favour.

It was a lacklustre from the RR middle order batsmen as KKR reigned supreme at the death to advance to Qualifier Two for the second time in as many seasons.

Kolkata will face Hyderabad in the virtual semifinal round on May 25.

Earlier, the sixes were a rarity in the first half of KKR innings and it was only in the 14th over Shubman Gill hit the first shot over the ropes in his crucial fifth-wicket partnership with Karthik.

Karthik and Gill added 55 runs in 38 balls as the Under-19 World Cup winning youngster Gill impressed with his stroke-making skills en route his 17-ball 28 (3x4, 1x6).

From being 63 for 4 midway into the innings, KKR brilliantly stepped on the gas in the second-half, scoring 106 runs in the last 10 overs with Russell in charge of the proceedings.

Jaydev Unadkat, who leaked 33 runs from his two overs, was a big letdown from Rajasthan's perspective as the Ajinkya Rahane-led side could not choke the hosts despite a a sound start.

Starting the proceedings for Rajasthan, K Gowtham left Kolkata in tatters with a twin blow of Sunil Narine (four) and Robin Uthappa (three) in his first two overs before Barbadian pacer ensured their lowest powerplay score of the season - 46/3 - dismissing Nitish Rana (3).

Narine smashed Gowtham's through covers for a boundary to start off the proceedings in his signature style but the off-spinner fired in a quicker one next up and the Trinidadian was beaten and stumped in the second ball.

In the first ball of his next over Gowtham plucked a smart return catch off Robin Uthappa's top-edge for a soft dismissal while Archer reduced KKR to 24/3 inside four overs.

There was more misery in store for KKR as opener as an under-pressure Chris Lynn did not survive long as their top four batsmen folded for 51 in eight overs.

Just when their ship looked to sink in front of a shell-shocked capacity Eden crowd, Karthik continued to his sublime form and found a fine ally in Gill to revive their innings.