Harbhajan will be playing for Chennai this time after donning the Mumbai jersey since the inception of the Indian Premier League. 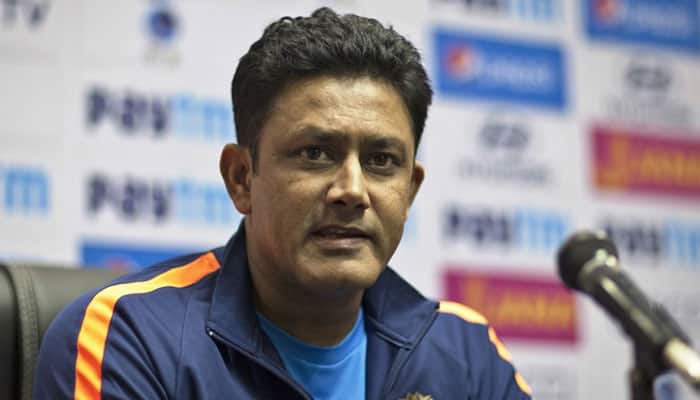 Mumbai: Anil Kumble believes Mumbai will miss the experience of off-spinner Harbhajan Singh who has joined Chennai and said the onus would be now on allrounder Krunal Pandya to lead the spin department for the defending champions in IPL 11.

Harbhajan will be playing for Chennai this time after donning the Mumbai jersey since the inception of the Indian Premier League. Title holders Mumbai will clash with two-time champions Chennai on Saturday at the Wankhede Stadium in the lung-opener of IPL 11.

"Mumbai Indians will certainly miss the experience of Harbhajan Singh as spinner. Krunal Pandya is a really good all-rounder, but he will have to lead the spinners now," said Team mentor Kumble while speaking during the Star Sports Select: The Dugout' program.

"They have Rahul (Chahar) as a legspinner, but again an unknown youngster. The experience of someone like Bhajji (Harbhajan) during those four overs and also what he brings with the bat as well ... But having said that they have the other bases covered."

Kumble, India's leading wicket-taker in Tests, also believes that Bangladesh pacer Muztifizur Rahim and India's Jasprit Bumrah will play a crucial role in the death overs for Mumbai Indians. "The Mumbai Indians have got Mustifizur Rahim, so that he can play that role of bowling in the death overs. They have (Jasprit) Bumrah, who has grown leaps and bounds, he is the go-to bowler for the team," said Kumble when asked whether Mumbai will also miss the services of Lasith Malinga, who is now their bowling mentor.

Former India skipper Kumble feels the U-19 players would be under sharp focus during the IPL which has proved to be a great platform for the youngsters to get national recognition and take a step closer to the senior national team. "The U19 boys would certainly be in focus. Prithvi Shaw, the Nagarkotis (referring to Kamlesh Nagarkoti), all of them would be certainly in focus. It will be a big opportunity for these youngsters to showcase their talent.

"The Hardik Pandya, the Bumrahs, all have come through the IPL, it is an opportunity for everyone. We know Shreyas Iyer, no matter how much domestic performances he had, but as soon as had a good IPL performance, then suddenly people start noticing it.

"So everyone in domestic cricket understand that IPL is a great platform for them to showcase the talent and possibly one step closer to making it to the Indian team. But the Under 19 boys who did well in the World Cup, would be under sharp focus," he signed off.