IPL 2019, Hyderabad vs Punjab Highlights: As it happened

Punjab and Hyderabad will look to get back to winning ways when they lock horns in an Indian Premier League (IPL) clash in Mohali on Monday. 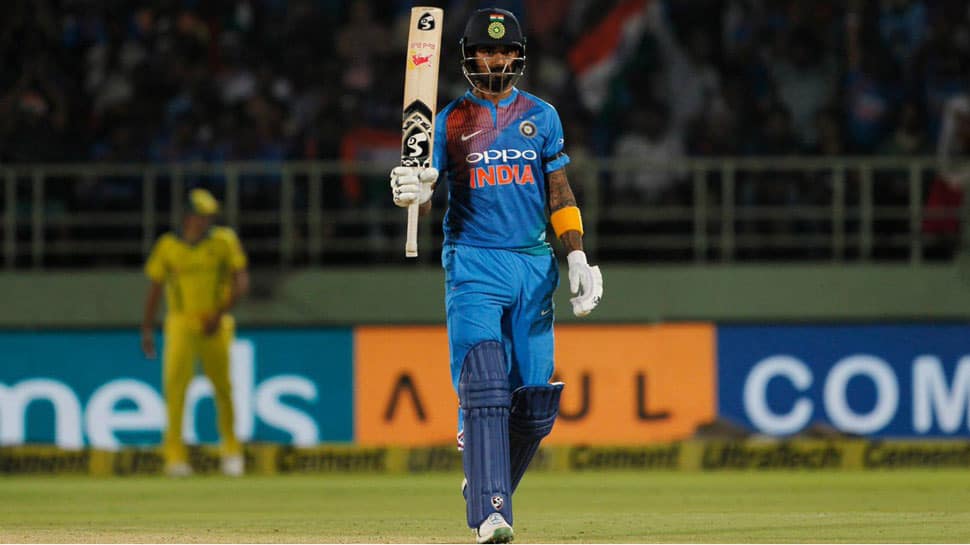 Opener KL Rahul and Mayank Agarwal notched up half-centuries as Punjab clinched a thrilling six-wicket win over Hyderabad in the Indian Premier League (IPL) clash at the Punjab Cricket Association (PCA) Stadium in Mohali on Monday.

After being asked to bat first, opener David Warner struck an unbeaten knock of 70 runs to help his side post a competitive total of 150/4.

In reply, Rahul smashed a 71-run knock off just 53 balls besides also sharing a huge partnership of 114 runs with Mayank Agarwal (55) for the third wicket to help Ravichandran Ashwin's side with a ball to spare.

# Mandeep Singh comes to bat in!

# Wicket! Sandeep Sharma delivered a short of length ball around off and Agarwal smashed it towards deep midwicket as Vijay Shankar made no mistake to take a simple catch at deep midwicket. Punjab 132/2 (17.1 overs)

# Rahul brought up a half-century off just 34 balls. He achieved the feat by slapping the final delivery of the 13th over towards wide long-on for four runs. The hosts 46 runs from 36 balls from six overs remaining. Punjab 105/1 (14 overs)

# 21 runs off the last two overs, including two boundaries and a six. Rahul and Agarwal continue to stand strong at their respective scores of  40 and 34 as Punjab require 61 runs from 48 balls. Punjab 90/1 (12 overs)

# 13 runs off the last two overs, including a six from Agarwal of Mohammad Nabi's fifth delivery in the sixth over. Punjab now need 108 runs from 13 overs. Punjab 43/1 (7 overs)

# Wicket! Rashid Khan gave a much-needed breakthrough to Hyderabad by taking a big wicket of Chris Gayle (16). The Caribbean star looked to hit the ball over long-on Deepak Hooda ran to his right to grab the ball safely. Punjab 18/0 (3.1 overs)

# Just two runs off the very first over from Bhuvneshwar. Rahul got off the mark by guiding the first delivery to mid-on for a quick single before Gayle too opened his account in a similar fashion off the third delivery. Punjab 2/0 (1 over)

# Chris Gayle and KL Rahul have walked down the crease to begin Punjab's chase. Bhuvneshwar Kumar begins the attack for Hyderabad.

# FIFTY! Warner (64) has brought up a half-century off just 49 balls. He achieved the feat by scoring two runs off Mujeeb Ur Rahman's last delivery of the 17th over. Warner along with Pandey (13) have added 20 runs off the last two overs to guide Hyderabad past 120-run mark. Hyderabad 124/3 (18 overs)

# Manish Pandey is the new batsman in!

# Wicket! Ashwin strikes again. Warner returned the ball back to Ashwin as the  Indian bowler collected the ball and hit it towards the stumps at the non-striker's end to remove Mohammad Nabi. Hyderabad 88/3 (14 overs)

# 18 runs off the last two overs, including a boundary from Warner. The Australian opener (33) continues to stand strong at the crease and is looking for good support from Mohammad Nabi (11). Hyderabad 79/2 (13 overs)

# Wicket! Ashwin delivered a length ball outside off and Shankar (26) attempted to play it towards the third man but ended up giving an easy catch wicketkeeper KL Rahul behind the stumps. Hyderabad 61/2 (11 overs)

# Rajpoot conceded six runs before Shami bowled a good over of just one run. Warner (3*) and Shankar (5*) are batting cautiously and looking to build a partnership after an early departure of Bairstow. Punjab, on the other hand, continue to pile pressure on the hosts and are avoiding giving easy runs to them. Hyderabad 18/1 (4 overs)

# Mohammad Shami has been introduced into the attack!

# Wicket! Mujeeb Ur Rahman was called into the attack and he delivered in his very first over by removing Bairstow for one run. The England batsman flicked the fourth delivery towards short midwicket as Ashwin made no mistake and dove forward to take a smart catch. Hyderabad 11/1 (2 overs)

# A tight over from Rajpoot as he conceded just three runs, two via ball to Hyderabad. Warner got off the mark by tapping the first delivery towards short cover for a single, Bairstow too opened his account with one run as he guided the third delivery towards midwicket. Hyderabad 3/0 (1 over)

# Jonny Bairstow and David Warner have walked down the crease to begin Hyderabad's innings. Ankit Rajpoot to open the attack for Punjab.

# While Hyderabad are going with the same Playing XI, Punjab have made two changes to their team. Mujeeb Ur Rahman and Ankit Rajpoot have been called in place of Andrew Tye and Murugan Ashwin, respectively.

# Punjab win the toss and elect to bowl first against Hyderabad!

Coming on the back of defeats in their respective last Indian Premier League (IPL) clashes, Punjab and Hyderabad will look to return to the winnings ways when they face each other at the Punjab Cricket Association (PCA) Stadium on Monday.

Both sides are heading into the clash with three wins from five games they have played so far in the 12th season of the India T20 league.

Hyderabad kicked off their campaign with a six-wicket defeat to Kolkata before they registered three successive wins against Rajasthan, Bangalore and Delhi. However, they slumped to a 40-run loss at the hands of Rohit Sharma's Mumbai in the last match.

Ravichandran Ashwin-led Punjab, on the other hand, sealed victories against Rajasthan, Mumbai and Delhi while losing their IPL clashes against Kolkata and most recently at the hands of MS Dhoni-led Chennai.

However, Bhuvneshwar Kumar's side are placed second in the eight-team standings while Punjab are standing fifth due to net run rate.

While Punjab will hope to see West Indies swashbuckling batsman Chris Gayle make a return to the top of his game after being dismissed for just five runs in the previous match, Mayank Agarwal, Mandeep Singh, David Miller will be keen to come up with much better performances in the middle order.

For Hyderabad, the pace trio of Bhuvneshwar Kumar, Sandeep Sharma and Siddharth Kaul have been decent so far while the Afghanistan spinners Rashid Khan and Mohammad Nabi have also been quite impressive.

We hope to beat KKR at their own den, says Delhi Capitals' Chris Morris