IPL 2019, Mumbai vs Rajasthan Highlights: As it happened

Jos Buttler smashed a blistering knock of 89 runs as Rajasthan defeated Mumbai by four wickets in their Indian Premier League (IPL) clash at the Wankhede Stadium on Saturday. 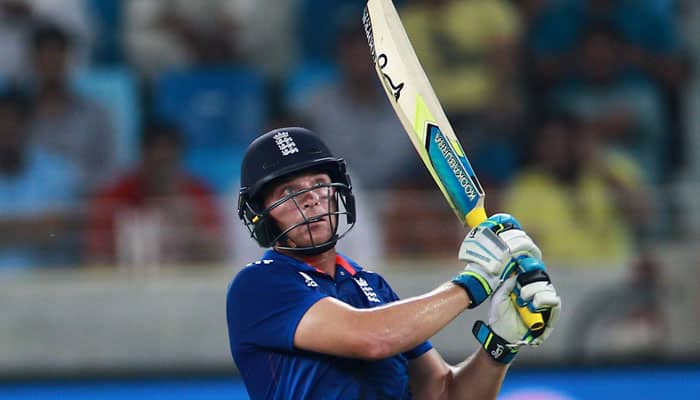 Jos Buttler smashed a blistering knock of 89 runs as Rajasthan defeated Mumbai by four wickets in their Indian Premier League (IPL) clash at the Wankhede Stadium on Saturday.

After being asked to bat first, Quinton de Kock scored a quickfire 52-ball 81 runs while opener and skipper Rohit Sharma well-supported him with a 47-run knock as Mumbai post a huge score of 187/5 in their stipulated 20 overs.

In reply, Buttler struck eight boundaries and seven sixes in his 43-ball knock while Ajinkya Rahane (37) and Sanju Samson (31) also made significant contributions to help Rajasthan chase down the target in 19.2 overs.

# Wicket! Krunal Pandya struck twice to remove Tripathi (one) and Livingstone (one). While Tripathi was caught by Hardik Pandya at deep midwicket, Livingstone stumps were rattled by Krunal's final delivery. Rajasthan 174/5 (18 overs)

# Liam Livingstone is the new batsman in!

# Steve Smith comes to bat in!

# Wicket! Rahul Chahar bagged a big wicket for Mumbai by removing Buttler for 89. The England batsman attempted to score his seventh successive boundary but ended up giving a catch to Suryakumar at long-off. Rajasthan 153/2 (14 overs)

# Alzarri Joseph bowled the most expensive over of the 2019 IPL, conceding 28 runs to Rajasthan. The Mumbai bowler was smashed for two sixes and four back-to-back boundaries by  Buttler as Rajasthan need 42 runs off 42 deliveries. Rajasthan 146/1 (13 overs)

# 14 runs off the last two overs, including two boundaries. Buttler has brought up a half-century off just 29 balls.He achieved the feat by driving the final delivery of the 10th over to long on for a single. Rajasthan now need 85 runs required from 54 balls. Rajasthan 103/1 (11 overs)

# Wicket! Krunal Pandya was brought into the attack and he delivered in the very first over by removing Rahane for 37. The Indian batsman went for the slog sweep for Suryakumar Yadav to take a simple catch at deep midwicket. Rajasthan 64/1 (7 overs)

# Rajasthan have added 20 runs off the last two overs, including a six and two boundaries, to reduce the chase to 156 runs from 16 over. The visitors, however, experienced a nervy moment when Mumbai made a leg before wicket appeal against Buttler off Chahar's delivery. The review showed no bat was involved. Rajasthan 32/0 (4 overs)

# 12 runs off the first two overs. Rahane opened his account by lofting the fourth delivery of the first over straight of mid off for four runs, while Buttler too got off the mark with a boundary by lifting the third delivery from Alzarri Joseph over cover. Rajasthan 12/0 (2 overs)

# Wicket! Archer bowled a short off-cutter in the third delivery of the 19th over, propelling De Kock to hit it towards long-on only for Jos Buttler to take a good catch diving forward. the South African went back to the pavilion after scoring 81 runs. Mumbai 171/4 (19 overs)

# Wicket! Mumbai have lost their third wicket after Pollard (6) was caught by Shreyas Gopal near midwicket off the second delivery of the 17th over from Archer. Mumbai 145/3 (17 overs)

# Wicket! Kulkarni delivered a length ball on off and Saryakumar (16) looked to slap it down the track but missed the ball as it hit straight to the stumps. 124/2 (14 overs)

# Wicket! Jofra Archer bowled a length ball outside off in the fifth ball of the 11th over and Rohit went for a pull, only to see Jos Buttler taking a catch at long-on. The Mumbai skipper fell just three runs short of a half-century. Mumbai 97/1 (11th overs)

# De Kock (46) is quickly approaching towards his half-century while Sharma (30) also continues to stand strong at the crease. Rajasthan introduced Liam Livingstone into the attack in the eighth over and he conceded 13 runs to Mumbai, including two sixes to de Kock. Mumbai 76/0 (9 overs)

# Jaydev Unadkat and Shreyas Gopal come into the attack.

# Runs are flowing in at a good pace for Mumbai as the hosts have added 26 runs off the last two overs, including six and three boundaries. Sharma (24) and De Kock (27) continue to stand strong at the crease and have brought up a 50-run stand for the opening wicket. Mumbai 53/0 (5 overs)

# Dhawal Kulkarni conceded just four runs before Gowtham bowled an expensive 18-run over. De Kock launched the first delivery of the third over towards long-on for the first six of the match before Sharma pulled back his first boundary of the clash by brilliantly sweeping up the fourth delivery of the over towards backward square. Mumbai 27/0 (3 overs)

# Just five runs of the very first over. Sharma got off the mark by driving the first delivery elegantly down to long on for a single, while De Kock also opened his account in a similar fashion off the very next ball. Mumbai 5/0 (1 over)

# Rohit Sharma and Quinton de Kock have walked down the crease to begin Mumbai's innings. Krishnappa Gowtham to open the attack for Rajasthan.

# Rajasthan win the toss, opt to bowl first against Mumbai!

Skipper Rohit Sharma will make a return from injury when his side Mumbai will square off with struggling Rajasthan in a 2019 Indian Premier League (IPL) clash at the Wankhede Stadium on Saturday.

The 31-year-old Indian opener was forced to miss an IPL match for the first time in 11 season when he sat out of Mumbai's previous game against Punjab due to leg spasm.

Stand-in-skipper Kieron Pollard struck a blistering knock of 83 runs to help the Mumbai team not only clinch a three-wicket win over Ravichandran Ashwin's side, but also continue their good run in the tournament so far.

While Mumbai are currently standing at the third place with four victories from six matches they have played so far, Rajasthan are down to the seventh spot in the eight-team Indian T20 league with just a single win from six games.

Heading into the clash, Rohit's side will look to continue their rich vein of form in the tournament and hope to seal their fourth consecutive victory.

The Indian batsman's return in the team will not only put to rest any doubts over his fitness but would also boost the Mumbai's batting line-up of Ishan Kishan, Hardik Pandya, Krunal Pandya and Surya Kumar Yadav.

Ajinkya Rahane-led side, on the other hand, will look to turn the tables for themselves and get back to winning ways with a triumph over Mumbai.