Rajasthan Royals’ batsman Mahipal Lomror was at his lethal best as he smashed 17-ball 43 against Punjab Kings in the side’s opening match of phase 2 of the IPL 2021 in Dubai on Tuesday (September 21). 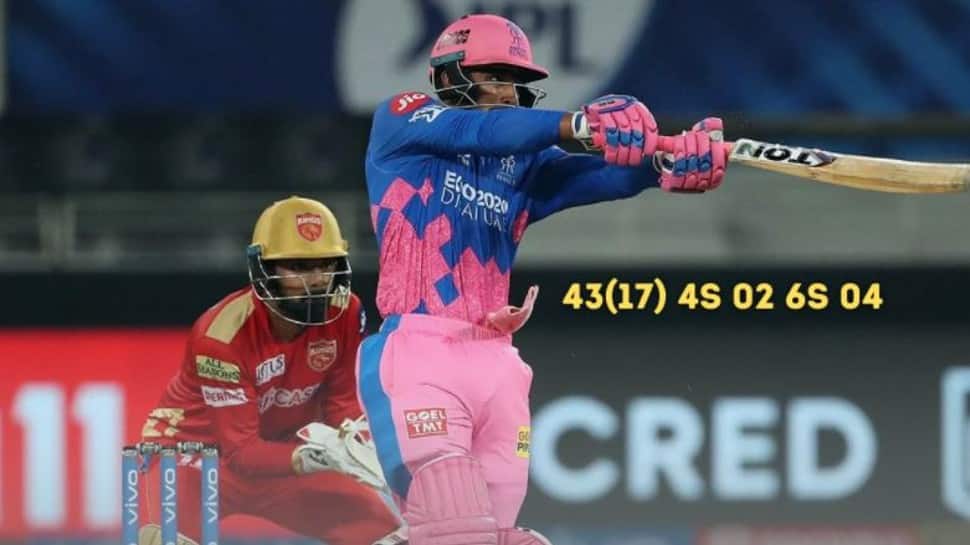 Rajasthan Royals’ batsman Mahipal Lomror was at his lethal best as he smashed 17-ball 43 against Punjab Kings in the side’s opening match of phase 2 of the IPL 2021 in Dubai on Tuesday (September 21).

Lomror’s innings included as many as 4 sixes. It featured a couple of biggie against Adil Rashid and then he welcomed Deepak Hooda with back-to-back sixes in the 16th over.

Lomror might have missed a fifty but he surely won many hearts as fans took to Twitter to praise the youngster. Here's how they reacted:

Punjab had practiced for other people but Mahipal Lomror came from outside the syllabus like Tewatia had come last time.#PBKSvsRR ||@rajasthanroyals pic.twitter.com/mrp6fCAQa7

Mahipal Lomror what an innings man!madness in Dubai by Lomror...
You may be England main T20I spinner Adil but This is our backyard.. #IPL2021 #KXIPvRR pic.twitter.com/37Mj3xMvlm

Mahipal Lomror six hitting shots was just so accurate and powerful.. Great future ahead for him.. #PBKSvsRR #PBKSvRR #IPL

Notably, Lomror was in excellent form for Rajasthan in the domestic circuit earlier this year. The 21-year-old continued from where he left off. He was only playing his first match in IPL 2021 after missing out on playing XI in the first 7 matches.

Talking about the match, Lomror and Yashasvi Jaiswal starred with the bat as Rajasthan Royals (RR) posted a score of 185 in twenty overs before getting bowled out against Punjab Kings (PBKS).

Lomror and Jaiswal played innings of 43 and 49 respectively for the Royals. Debutant Evin Lewis also played an important inning of 36 in 21 balls. For Punjab, Arshdeep Singh scalped five wickets while Mohammad Shami returned with three.

Put in to bat first, Rajasthan enjoyed a great start in the contest as their openers Evin Lewis and Yashasvi Jaiswal came with all guns blazing. Both batsmen took the attack to Punjab bowlers as they amassed 53 runs in the first five overs of the innings.

Arshdeep Singh then provided the much-needed breakthrough for PBKS in the last over of powerplay as Evin Lewis walked back to the pavilion for 36 off 31 after Mayank Agarwal took a superb diving catch.

In the eight over, Punjab handed RR another blow as Ishan Porel took the wicket of their captain Sanju Samson. He walked back for 4 off 5 after edging one to KL Rahul. Despite losing two wickets, runs kept coming for RR as Jaiswal continued the hammering of bowlers with Liam Livingstone on the other side also giving him hand.

But in the 11th over of the innings, Arshdeep Singh struck again as he removed the dangerous Liam Livingstone thanks to a stunning catch from Fabian Allen at the boundary. The right-hander made 25 off 17.

Mahipal Lomror who was the new batsman on the pitch displayed no signs of going to defence as he smashed back to back sixes on Adil Rashid in the 13th over. In the very next over, Yashasvi Jaiswal missed out on his half-century by one run as Harpreet Brar edged him to the fielder in cover. Jaiswal walked back after an impressive 49 off 36.

In the 15th over, Mahipal Lomror took the matter into his hands as he along with Riyan Parag gathered 24 runs in Hooda's over. Mohammed Shami then removed Parag in next over while Arshdeep got dangerous-looking Lomror later. Mahipal Lomror scored a sizzling 43 off 17.

In the penultimate over of the innings, Shami removed Rahul Tewatia and Chris Morris. While Arshdeep got his fourth and fifth wicket of the innings in the last over after sending Chetan Sakariya and Kartik Tyagi back to the pavilion.