RCB captain Virat Kohli, who was shirtless with a black shade on his head and a swanky watch, stole the show for his fans. 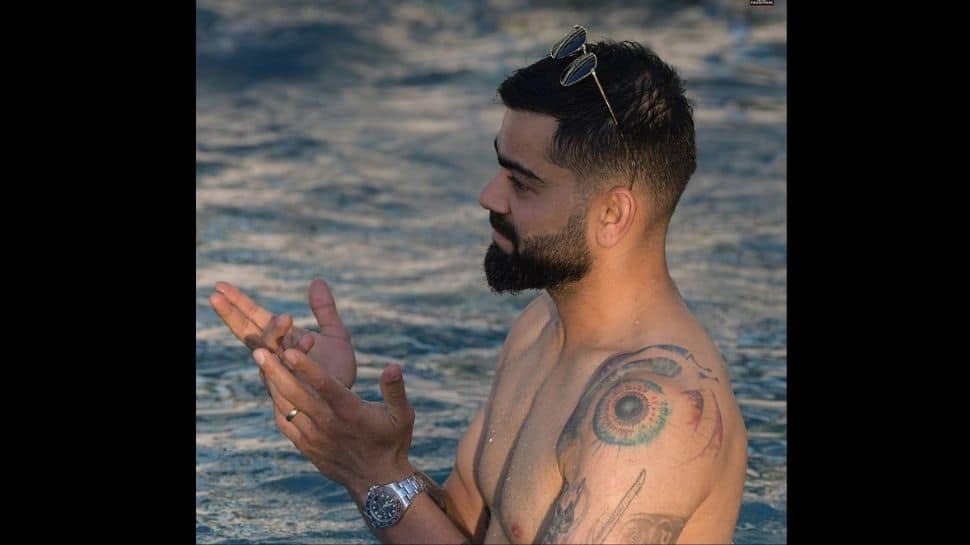 Royal Challengers Bangalore captain Virat Kohli is not only one of the best batsman in the world but is a fitness icon in the cricketing circuit. Kohli is not only admired for his batting skills but also for his supreme physique and his fitness regime.

RCB, who lost two back-to-back matches in the UAE leg, finally bounced back to winning ways when they got the better of the defending champions. With a win and momentum on RCB’s side, the players were upbeat and hence decided to unwind in a swimming pool session.

Our boys definitely deserve to cool off after a couple of days of intense #IPL action. #PlayBold #WeAreChallengers #IPL2021 pic.twitter.com/SNNMwIvxtJ

Kohli, who was shirtless with a black shade on his head and a swanky watch, stole the show for his fans. His toned body has got fans drooling. Here are some of the reactions:

THAT NOOR ON HIS FACE .@imVkohli love u pic.twitter.com/sa1PO5uQMl

KING IS A DIFFERENT VIBE AFTER ALL.Gave is all in last 3 days now deserves to relax most.All the best for the next game @imVkohli love you the most my pic.twitter.com/MOQiFGCZsx

The RCB captain shocked one and all when he made the announcement that he would step down as the leader of the unit after the season. Kohli, with the bat, has been in good form. He has already hit two fifties in three matches since IPL 2021 resumed in the UAE.

Former South Africa and RCB paceman Dale Steyn has said that the Bangalore franchise would like their captain Kohli to be more aggressive. “I think the guys prefer to see him be more aggressive, it seems to get him to play a bit more fluently. It kind of sparks the younger players too, a lot of the younger guys have massive respect for Virat, and they admire him so much that they kind of follow in his direction,” Steyn said while talking on the Star Sports’ Select Dugout.

“When he’s fighting fire with fire and nobody`s doing it for India, you can hear all the quicks, when they were playing against England recently, how they were talking about following their captain and they wanting to play fighting fire with fire. So, he does lead from the front in that aspect and RCB love it. He’s kind of built that thought around RCB now. It`s the kind of culture that they have got in that dressing room,” he added.

Kolkata Knight Riders vs Delhi Capitals IPL 2021 Live Streaming: KKR vs DC When and where to watch, TV timings and other details