It was unbelievable, will cherish for long: Alzarri Joseph on dream IPL debut 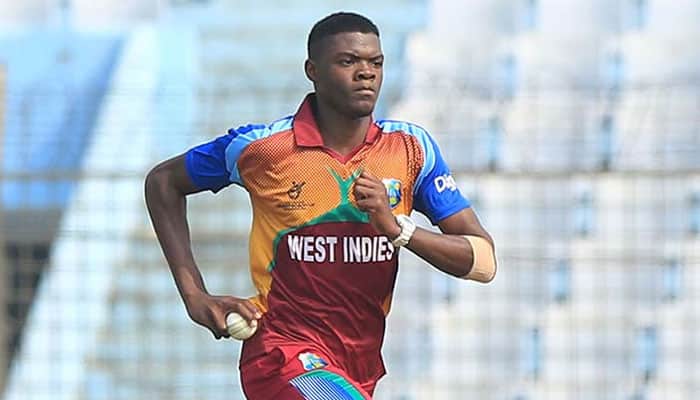 Young West Indian pacer Alzarri Joseph described his record-breaking bowling effort on his IPL debut as "unbelievable", saying he will cherish the moment for a long time to come.

The soft-spoken Joseph (6/12) claimed the best bowling figures in IPL's history, bettering Sohail Tanvir's 6/14 registered in the inaugural edition in 2008. The previous best figures on IPL debut was Andrew Tye's 5/17, in 2017.

"Unbelievable. It's a great start. I dont' think I could have asked for anything better. So I will really cherish this moment," said Joseph at the post-match press conference after helping Mumbai Indians secure a 40-run win over Sunrisers Hyderabad here on Saturday night.

Defending a modest 136 for seven, Joseph wreaked havoc with the ball to bundle out Sunrisers for 96.

Asked what was going on his mind before his debut match, he said: "It was my first game. So I just wanted to go out and put all my effort into this team.

"The score doesn't really matter. I just go out and put my best foot forward. You get the information from the first ball so you know what variations you need to use."

Joseph said the Wankhede pitch was not the best one for shot-making and they believed in defending the modest total at the break.

"The pitch wasn't the easiest to play on, so 136 from 120 balls we knew we were in for a game if we take some early wickets," he said.

Stating that his sole aim is to help his side win the IPL crown, Joseph said he was happy to finish off things for Mumbai by claiming the last wicket of Kaul.

"It's not something I play for. I play for wins. It's a good feeling but I want to win this tournament," he said.

"The last wicket because that gave us the win. My aim is to do my best to win games for my team. Just put my whole effort into the team."

Want to win as many IPL games as possible at the start: Mumbai's Rohit Sharma