Kieron Pollard hammered an unbeaten 46 off 26 balls, helping the Mumbai Indians post a total of 136 for seven after an ordinary start. 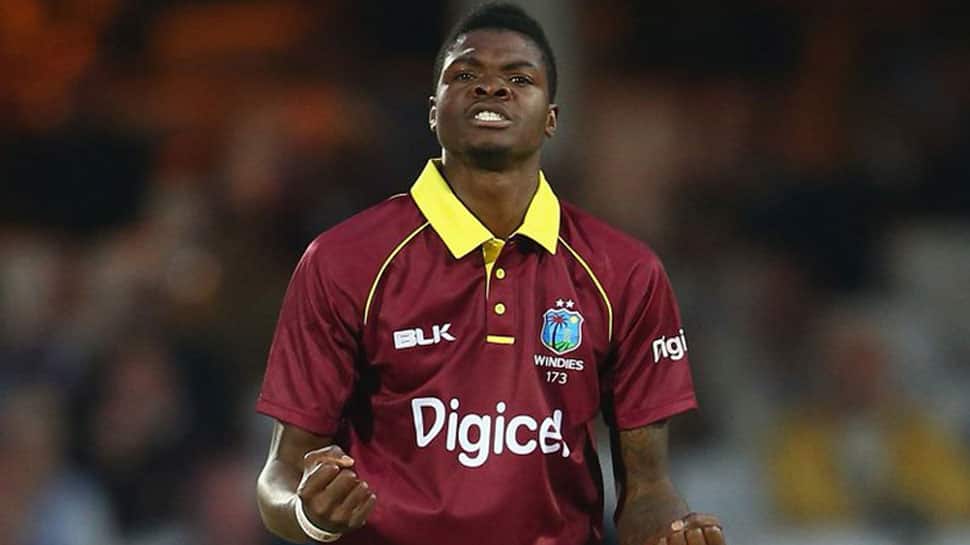 Young West Indies pacer Alzzari Joseph made a dream IPL debut by recording the best bowling figures in the tournament's history as Mumbai Indians registered a 40-run win over Sunrisers Hyderabad in a low-scoring game on Saturday.

Kieron Pollard hammered an unbeaten 46 off 26 balls, helping the Mumbai Indians post a total of 136 for seven after an ordinary start.

While Pollard was the stand out batsman, another West Indian in Joseph made all the difference in the bowling department, ending with sensational figures of six for 12 in 3.4 overs, bettering the effort of Pakistan pacer Sohail Tanvir, who had taken six for 14 in the inaugural IPL edition in 2008. Hyderabad were bowled out for 96 in 17.4 overs.

It was the third win for Mumbai Indians in five games while Hyderabad suffered their second loss in five matches.

Considering the stellar form of openers David Warner and Jonny Bairstow, 137 was expected to be a comfortable chase for Hyderabad. But they both were dismissed cheaply and that exposed the middle order which had not been tested much courtesy the devastating run of the openers.

It was the first time this season that Hyderabad lost a wicket in the first six overs.

Young West Indies pacer Joseph bowled a dream first over in the IPL, dismissing Warner in a wicket maiden. In his following over, the 22-year-old got rid of Vijay Shankar to leave Hyderabad at 43 for three in seven overs and spice up the contest.

Leggie Rahul Chahar picked up two important wickets to increase the pressure on the home team which was reduced to 62 for five in the 12th over.

The hosts needed 53 runs off the last 30 balls and ended up well short of the target with Joseph running through the opposition line-up.

Earlier, it seemed that Hyderabad would limit Mumbai to a sub-120 total before Pollard's brute power came to the fore, enabling the visitors to score 39 crucial runs off the final 12 balls.

Until Pollard cut loose, Hyderabad put up an impressive bowling effort on a slow pitch.

While Hyderabad fielded an unchanged side, Mumbai Indians made two changes in the playing eleven with Ishan Kishan replacing Yuvraj Singh and Joseph coming in for Lasith Malinga, who has gone back to Sri Lanka to play in a domestic event.

It wasn't the best of starts for Mumbai, who lost captain Rohit Sharma (11) and Suryakumar Yadav (7) early to be 30 for two in six overs. Rohit was dropped in the first over by Siddarth Kaul but could not make much use of that opportunity and holed out at deep midwicket off Mohammad Nabi in the fourth over.

Suryakumar, who had hit a crucial 59 in the previous game against CSK, too did not last long and was adjudged leg before wicket off Sandeep Sharma.

Stroke play was proving to be difficult on a slow surface and the situation became worse for the visitors when the in-form opener Quinton de Kock (19) departed after trying to increase the scoring rate.

The batsmen especially struggled against Nabi, who ended with envious figures of 13 for one in four overs as Mumbai crawled to 52 for three in 10 overs.

After Nabi completed his full quota of overs, his Afghanistan teammate Rashid Khan made life tough for the opposition batsmen. The Hyderabad pacers -- Sharma and Kaul -- too were up to the task, using their pace well on a slow wicket to stifle the batsmen.

Mumbai's innings hardly had any flow before Pollard provided the much needed final flourish in the death overs by smashing Kaul for three massive sixes in the 19th over that went for 20 runs.

Bhuvneshwar's final over went for 19 runs with Pollard scoring two fours and a six, giving Mumbai something to bowl at. Poor fielding let Hyderabad down towards the end of the innings.