Australia beat India by eight wickets inside three days in the first first day/night Test to take 1-0 lead in the three-match series here in Adelaide Oval on Saturday. Australia overhauled the target of 90 runs during the second session on the third day, reaching 93 for 2 in 21 overs in their second innings. 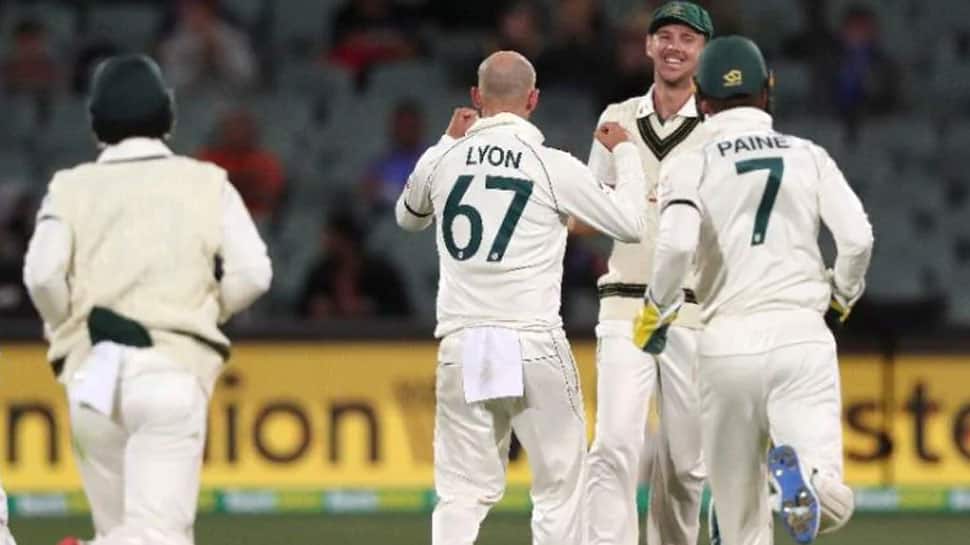 ADELAIDE OVAL: Australia beat India by eight wickets inside three days in the first first day/night Test to take 1-0 lead in the three-match series here in Adelaide Oval on Saturday. Australia overhauled the target of 90 runs during the second session on the third day, reaching 93 for 2 in 21 overs in their second innings.

The Indian cricket team under Virat Kohli also faced its worst hour of embarrassment while collapsing to its lowest Test score of 36 as a rampaging Australia cruised to an emphatic eight-wicket victory in the opening Day/Night Test. There were no demons in the pitch but Josh Hazlewood (5-3-8-5) and Patrick Cummins (10.2-4-21-4) displayed fast bowling of the highest quality, the impact of which will be far-reaching with three more Tests to go.

India's earlier lowest score was 42 at the Lord's in 1974 against England, known in Indian cricket parlance as the "Summer of 42". Saturday's total was also the lowest score in the brief history of D/N Tests and the joint fifth lowest overall.

The easy target of 90 runs was achieved by the home side in only 21 overs without much fuss. They only lost Matthew Wade (33) and Marnus Labuschagne (6) in pursuit of the easy goal and in the process, opener Joe Burns (51) got a confidence-boosting half-century. India have now lost three successive Tests well inside three days with two being in New Zealand earlier this year.

Well, the first pink-ball Test got over in just three days and two nights. Stunning show from Josh Hazlewood and Pat Cummins helped Australia thrash India. As reported, Virat Kohli will now fly back to India putting a big responsibility on Ajinkya Rahane's shoulders. No doubt, Team India will try their best to come back stronger in the rest of the Tests. That's all from us. Hope you have enjoyed our coverage. Goodbye!

Australian pace bowlers Josh Hazlewood and Pat Cummins reached personal milestones as they completed 200 and 150 Test wickets, respectively, in the first session of the third day`s play on Saturday morning as the hosts defeated India by 8 wickets in an easy chase.

Josh Hazlewood and Pat Cummins did a mind-bowling job with the ball in the first session. Indian batsmen simply couldn't cope against them and ended up with only 36-9 in their second innings. Australia needed 90 and they reached the target for the loss of just two wickets. Joe Burns remained unbeaten on 51. Australia take 1-0 lead in the four-Test series.

Burns goes for the pull, there's a catching chance for the fine-leg fielder but he spills it. Tough one. That's also a half-century for the opener. Well done, Aussies!

Nicely done by Saha who collects the ball after it hits Shaw on the leg. Wade is out of the crease as he plays the shot after coming down the track against Ashwin. Wade run out W Saha b Ashwin 33 (53).

Umesh Yadav has been brought back into the attack. He delivers a short one to Burns, the batsman plays an ugly pull, no timing on that one. Thankfully for the batsman, the ball falls in no man's land and two runs are added to the team's total. Aussies need just 20 now.

There will be some soul-searching from the Indians after this defeat. They have a week before the Boxing Day Test. Meanwhile, Wade and Burns are ambling towards the target.

Wade’s pull shot against Ashwin hits the right shoulder of Hanuma Vihari at short leg and the latter is down with pain. It was short delivery from Ashwin and Wad swept it hard.

It's time for the Dinner break! Both the sides have gone into the Dinner break with Australia scoring 15 runs without losing a single wicket, after being handed a target of 90 runs.

India record their lowest Test score of 36. Shami is walking off so this brings the end of India’s 2nd innings. They are 36 for 9, the previous lowest total in Test in cricket was 42 against England in 1974. India has posted its lowest ever total of 36/9 against Australia in the pink-ball game. Australia now need 90 runs to win the first Test.

Mohammed Shami took a blow on forearm from a short delivery from Cummins and has decided to retire hurt. This brings an end to India's innings. Australia need 90 to win.

5 wickets of Hazlewood, India 9 down!!

Hazlewood is on fire. The Australian pacer has got a 5-fer putting India in deep trouble and shattering Team Kohli's hope of securing a solid lead over the Hosts.

Md Shami, the new man in, has been hit on the hand by Cummins. Another woe to add to the troubles that India already have here. Clearly, a disastrous morning this has been for the Indians.

WICKET!! Josh Hazlewood has registered his eighth five-wicket haul in Test cricket, following the dismissal of Hanuma Vihari. Vihari failed to negotiate a beautiful delivery bowled outside off, edging the ball to Tim Paine. Mohammed Shami is the last batsman in.

India to avoid its lowest ever total against Australia! Hanuma Vihari crunches one through the off side for FOUR! It i the second boundary of Day 3, more importantly it has ensured India won’t be bowled out for the lowest ever total in Test cricket. They have crossed New Zealand’s 26 and are now at 30 for 8. Now the next target should be to score more than 42, which is India’s lowest total in Test cricket.

Second wicket of the over for Hazlewood. Ashwin goes for a first-ball duck. Another one of those deliveries which pitch in the corridor of uncertainty and takes the edge. Ashwin was pushing hard it. Hazlewood is on a hat-trick.

WICKET! Defending has not worked for India and they now need a miracle to turn the tables. This was a fullish delivery from Hazlewood and Saha chipped it straight to the short mid-wicket. W Saha c Labuschagne b Hazlewood 4 (15)

Hazlewood continues the attack. The pacer attacks the off stump and Vihari defends and gets off the mark. The batsman gets an outside off delivery but decides against cutting it. Then pushes one to mid-on for a single.

Pat Cummins is on fire. Australian pacers have wreaked havoc on Indian batsmen and they are unable to work it around. Meanwhile, Cummins has delivered another maiden India did collect a double when an inside edge off Saha's bat ran past the stumps.

Brilliant effort in the field from the debutant Cameron Green for his side! Pat gets his 4th wicket and he is on fire here.

After six wickets down, India's current lead over Australia is only 72 at the moment. Things are looking bad for the Indian side.

WICKET!! The Indian batting order has collapsed.  Now, Hazlewood gets Rahane out for a duck. India five down for 15.

GONE! India's top-order falling apart, now Hazlewood gets Agarwal out caught behind. India four down for 15. India's lead is just 68.

OUT!! Yet another setback for India. Cummins has his third. Removes Pujara. He is out for a duck. IND

WICKET!! Cummins gets Burmah. Bumrah caught and bowled. Cummis has done a brilliant job for Australia by removing the nightwatchman early.

The action begins !! Starc starts the proceedings for Australia.

This is what the pitch looks like ahead of play on Day 3. #AUSvIND

This is what the pitch looks like ahead of play on Day 3. #AUSvIND pic.twitter.com/5d4aP1myJ4

R. Ashwin bagged four wickets as a dominant India held a 62-run lead at stumps on day two of the Adelaide day-night Test after Australian captain Tim Paine ran out of batting partners. Paine was left stranded on 73 not out when the Australian innings ended at 191 to trail India's 244 by 53 runs.

Ashwin had figures of four for 55 while Umesh Yadav took three for 40. At stumps, India in their second innings were one down for nine with Mayank Agarwal on five and nightwatchman Jasprit Bumrah yet to score. Prithvi Shaw was bowled by Pat Cummins for four.

Fifteen wickets fell on the day which started when Cummins and Mitchell Starc took just 25 deliveries to knock off the final four India batsmen.

Hello and welcome to the live coverage of the third day of the first pink-ball Test being played between India and Australia at Adelaide Oval.