The visitors currently enjoy a 1-0 lead in the five match ODI series, having registered victory by a margin of eight wickets in the opening clash at McLean Park, Napier. 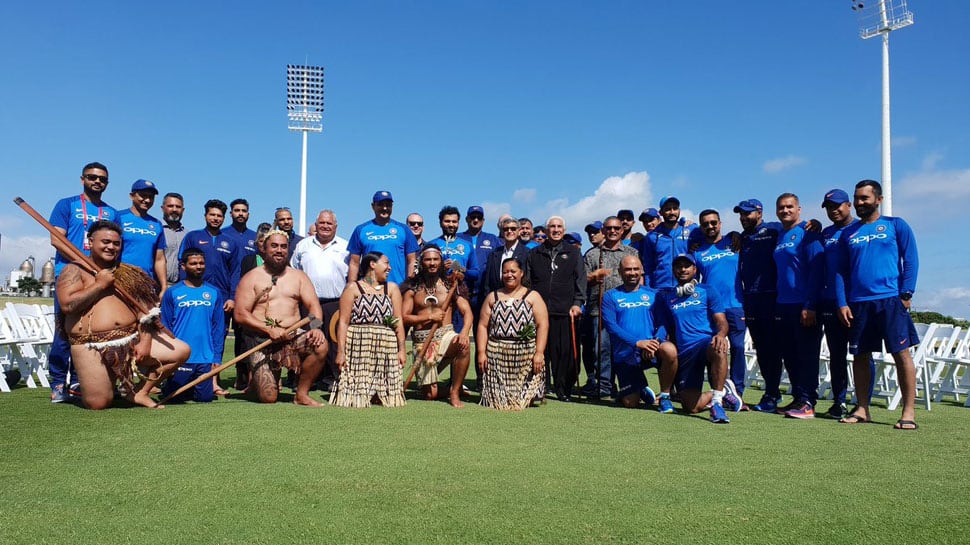 The Indian team on Friday received a traditional welcome at the Bay Oval from the Maori community, ahead of the second one-day international (ODI) against New Zealand on Saturday.

The visitors were greeted with a welcome dance known as the powhiri. This dance form takes place at a meeting ground and involves a challenge thrown by the host, in order to check whether the guests are allies or enemies.

FEATURE: #TeamIndia got a traditional welcome at the Bay Oval - something that the Men in Blue enjoyed before the start of the 2nd ODI - by @RajalArora

This custom may also involves a spear like weapon called the taiaha being carried by the hosts. The hosts finally lay down a token like a small branch, which the visitors are expected to pick up in order to show that they mean no harm.

Opener Rohit Sharma picked up a branch laid down by one of the performers, before the whole squad gathered to witness the dance form.

Head coach Ravi Shastri was full of praise and appreciation following the warm welcome as evident from his reaction on Twitter.

"Great to be welcomed and blessed by Maori powhiri from Ngai Tukairangi and Ngati Kuku, the manawhenua for the Bay Oval area," he tweeted.

Great to be welcomed and blessed by Māori pōwhiri from Ngai Tukairangi and Ngati Kuku, the manawhenua for the Bay Oval area  @BayOvalOfficial #NZvIND pic.twitter.com/g8ZbsMpkdI

The visitors currently enjoy a 1-0 lead in the five match ODI series, having registered victory by a margin of eight wickets in the opening clash at McLean Park, Napier.

The Indian team dismissed New Zealand for a total of 157 runs, after the latter opted to bat first having won the toss. Left-arm spinner Kuldeep Yadav and fast-bowler Mohammed Shami were the key performers for India, accounting for four and three wickets respectively.

In return, Indian skipper Virat Kohli and opener Shikhar Dhawan ensured a comfortable win for the visitors, after the target was revised to 156 runs off 49 overs, due to delay caused by the setting sun.

Dhawan was the top-scorer having scored 75 runs in 103 deliveries, with Kohli providing valuable support at the other end, accumulating 45 runs off 59 deliveries.