Mitchell Starc responds to on-field banter with R Ashwin, says he is waiting for India to tour Down Under

Starc was given quite a send-off by Ashwin during that second Test in Bengaluru, when the Indian offie tapping his forehead soon after he bowled Starc in 2nd innings of the match. 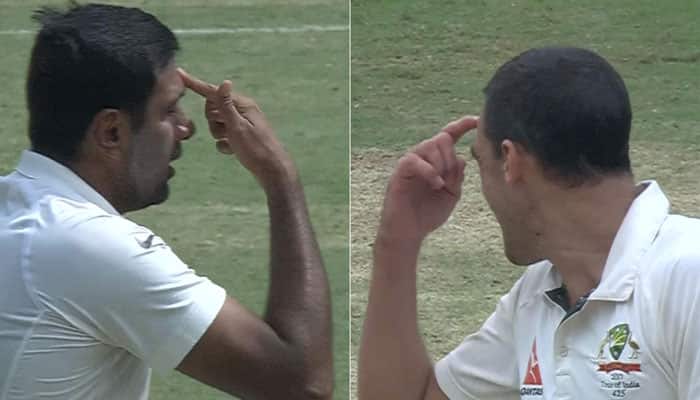 New Delhi: Aussie speedster Mitchell Starc, who was ruled out of the series ahead of Ranchi Test after suffering a stress fracture on his foot, had a quite popular on-field altercation with India's spin spearhead Ravichandran Ashwin. The pacer, however, said that contrary to the trend, the banter has come a lot more from the hosts this series and he is waiting for them to tour Down Under.

Starc was given quite a send-off by Ashwin during that second Test in Bengaluru, when the Indian offie tapping his forehead soon after he bowled Starc in 2nd innings of the match.

With the gesture, Starc was hinting to the opner that he is likely to face more such short-pitched deliveries.

On being asked about the run-in with Ashwin, a laughing Starc said he was looking forward to India's next Test tour down under.

"I look forward to bowling to Ashwin in Australia," he told The Back Page on Fox Sports. "(I might) take his advice and hit him on the badge. "(The on-field banter has) probably come a lot more from their side than ours. "There was a lot made of it before the series and there was so much hype before the series. I think we've just gone about the cricket that we have done for a long period of time now.

"(Australia's fighting draw in the third Test) shows how we are as a group and the Indians have come hard, it's almost a defence mechanism for them. "We won the first Test match, we (were there) for the challenge, they were scared of us beating them in India the way they've been playing "So it was almost like a defence mechanism for them and they obviously came out in the second Test match and performed really, really well and got back in (the series)."

The 27-year-old also revealed how severe his injury has been and his plan of action to getting back on field.

"It's OK, it's not snapped in half like the one 18 months ago," "I did the third metatarsal last time, this one is the fourth. It's a nice fracture, but it's not displaced so I don't need (to wear) a boot fortunately. "So I'm still in the gym and getting ready for when I do come back. When that might be, I see the specialist on Thursday and hopefully I'll get a clearer picture then.

"But the Champions Trophy is definitely not out of the picture at this time."

While the reports suggested that the Aussie pace spearhead will be a doubt for the Champions Trophy in June, he himself is adamant of regaining full fitness before the ICC event kicks off.