MS Dhoni finished the match unbeaten on 18 off 6 deliveries, which included 3 fours and 1 six. 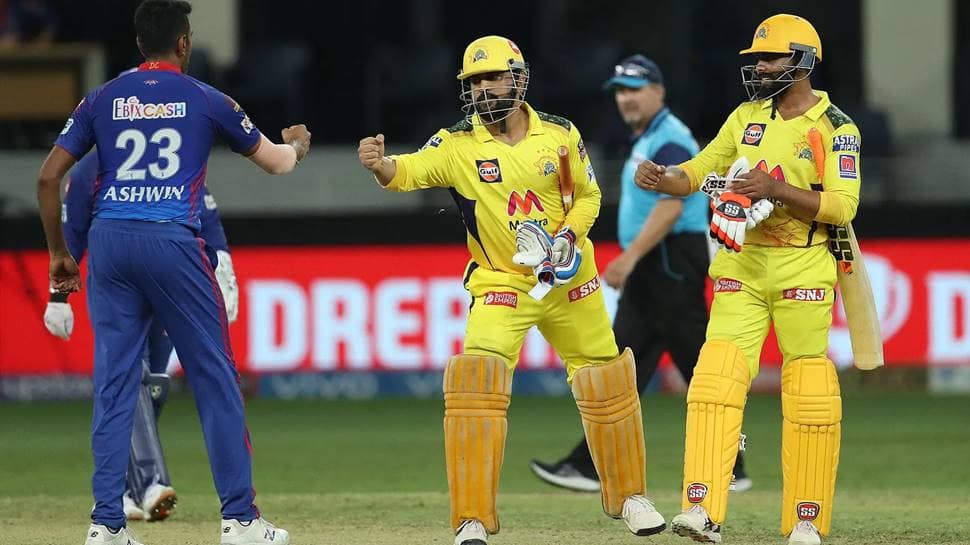 MS Dhoni's Chennai Super Kings registered their place in the finals of the Indian Premier League (IPL) 2021 as they defeated Delhi Capitals by four wickets in Qualifier 1 on Sunday. Chasing a stiff 173, the winning runs came off the CSK captain's bat, who arrived at the crease in a tricky situation but made sure he completed the task.

Dhoni finished the match unbeaten on 18 off 6 deliveries, which included 3 fours and 1 six. The wicketkeeper-batter joined the proceedings when CSK lost in-form opener Ruturaj Gaikwad in the first delivery of the 19th over, with the team still requiring 24 off 11 deliveries.

Dhoni didn't waste any time and made his intentions clear in the second delivery he faced, smashing Avesh Khan for a long six over the deep mid-wicket fence. He then hit Tom Curran for three consecutive boundaries as CSK wrapped up the chase with two balls to spare.

With this CSK reached their ninth IPL finals. Capitals, who came runners-up in the previous edition, still have a chance to join CSK in the finals. The Rishabh Pant-led unit will now lock horns with the winner of the Eliminator clash between Royal Challengers Bangalore and Kolkata Knight Riders in Qualifier 2.

For CSK it was not just Dhoni as opener Gaikwad and Robin Uthappa made some valuable contributions with the bat. Both the batsman stitched an important partnership for the second wicket, which drove the match into CSK's favour.

Earlier in the evening, Capitals skipper Pant displayed his muscle power and smashed an off Shardul Thakur for a one-handed six, with the ball traveling 86-metere over the mid-wicket region. Pant's powerful drive came while he was trying to reach a low full toss in the second delivery of the 16th over.

Riding on some ferocious hitting by Pant and Shimron Hetmyer, the Capitals posted a challenging 172/5 in their 20 overs. Pant played an unbeaten knock of 51 from 35 deliveries, while Hetmyer scored 37 off 24 balls, as the pair added 83 runs for the fifth wicket.

Capitals opener Prithvi Shaw also displayed some intense hitting and gave his side the start they would have hoped for. He added 60 runs off 34 balls, which included 7 4s and 3 6s.