It is to be noted that Mumbai Indians have won all of their four matches against Delhi Capitals this season. 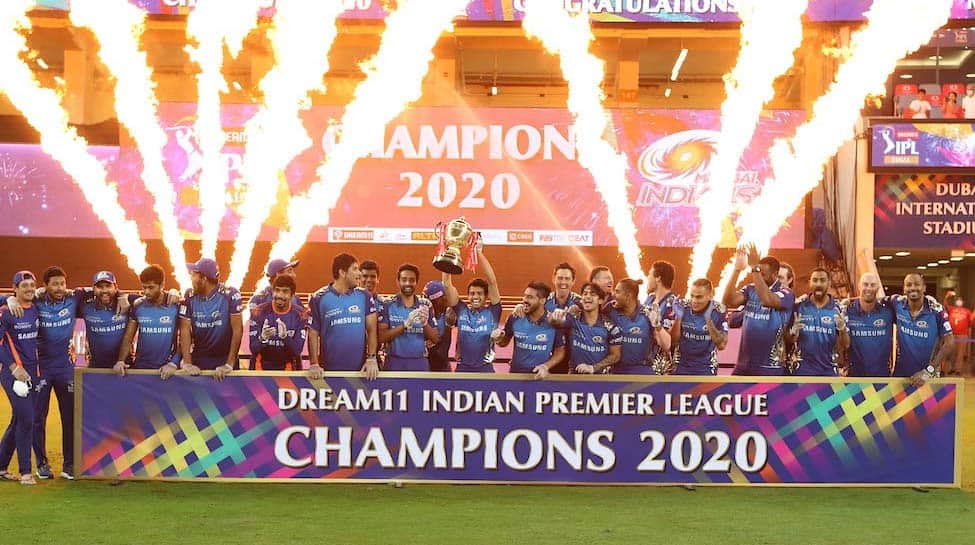 Rohit Sharma-led Mumbai Indians on Tuesday romped to their record fifth title in the Indian Premier League (IPL) with a comfortable five-wicket win over Shreyas Iyer's Delhi Capitals in the summit showdown of the 2020 edition of the cash-rich league.

Soon after the Mumbai franchise successfully defended their title, sports and B-town celebrities took to their social media handle to congratulate the five-time champions of the IPL.

Taking to his Instagram handle, Bollywood actor Ranveer Singh congratulated the Mumbai Indians on their historic win in a unique way by performing on a rap from his blockbuster movie 'Gully Boy'.

Legendary cricketer Sachin Tendulkar posted a couple of pictures of Mumbai Indians from their historic win and lauded the players for their complete domination over the Delhi Capitals during the final clash.

"What a victory by the boys! Complete domination by @mipaltan!Well done to the players and the support staff who have continued from where they left off last year," the master blaster tweeted.

What a victory by the boys! Complete domination by @mipaltan!

Well done to the players and the support staff who have continued from where they left off last year. #MIvDC #IPLFinal pic.twitter.com/ncRaxDUgLl

Legendary Australian cricketer Shane Warne congratuled the Board of Control for Cricket in Indian (BCCI) for making this season another huge success. He then congratulated Mumbai Indians for the victory and the Delhi franchise too for a great season.

Congrats to the @BCCI @SGanguly99 and all the @IPL staff and players on making this season another huge success ! A massive thanks to the players for the sacrifices they have made. Congrats to the @mipaltan on the victory & well done to the @DelhiCapitals on a great season too ! pic.twitter.com/CauLkXx1V2

Chasing a 157-run target, Rohit Sharma skipper-cum-opener Rohit Sharma played a captain's knock of 68 besides sharing over 40-run partnership each with Quinton de Kock (20), Suryakumar Yadav (19) and Ishan Kishan (33 not out) to help Mumbai Indians cross the mark in 18.4 overs and dent Delhi Capitals' hopes of achieving their maiden IPL glory.

Earlier during the clash, first-time finalist Delhi made a worst start to their innings, losing openers Marcus Stoinis (0) and Shikhar Dhawan (15) and first-drop Ajinkya Rahane (2) inside just 22 runs.

Subsequently, skipper Shreyas Iyer (65) then led from the front by not only notching up a half-century but also stitched a crucial stand of 96 runs with wicketkeeper-batsman Rishabh Pant (56) for the fourth wicket to power Delhi Capitals to a decent total of 156/7.

For Mumbai Indians, Trent Boult was the pick of the bowlers with impressive figures of three for 30. Nathan Coulter-Nile and Jayant Yadav contributed with two and a wicket, respectively.