The win saw New Zealand remain unbeaten in the 2019 World Cup, while West Indies currently have just one win from six games they have played so far. 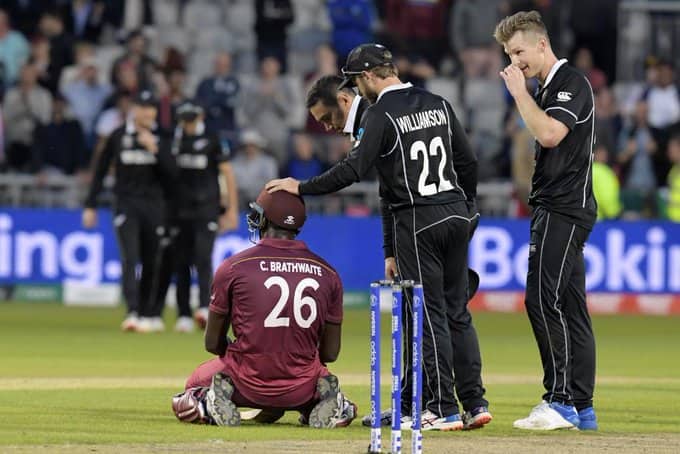 Swashbuckling batsman Carlos Brathwaite's valiant knock of 101 took West Indies on the verge of a historic win over New Zealand in their International Cricket Council (ICC) World Cup 2019 clash at Old Trafford in Manchester on Saturday, only to see the Kane Williamson-led side bounce back at the last minute to seal a narrow five-run win.

Brathwaite, the same man who guided the Caribbean side to the 2016 World Cup T20 glory after hitting England's Ben Stokes for four consecutive sixes, frustrated the New Zealand bowlers with his bombastic maiden ODI ton of 101 off 82 balls to miraculously turn the game in his side's favour after they were reduced to 245 for nine in their chase of 292.

The Caribbean star also smashed Matt Henry for three sixes and two boundaries in the 48th over to reduce his side's chase to eight runs needing off the last two overs.

Everything was looking in favour of the West Indies before Brathwaite fell victim of a Jimmy Neesham delivery in the penultimate over after being caught by Trent Boult just inside the long-on boundary.

Brathwaite, who was the last West Indies man to get out, shattered after his dismissal as he sank to his knees with his head down in despair. Seeing the Caribbean star in deep sorrow, the New Zealand cricketers namely Ross Taylor, Kane Williamson and Jimmy Neesham quickly moved towards Brathwaite to console him.

While Williamson--who himself notched up a brilliant knock of 148 during the clash--put his hand over Brathwaite forehead in genuine warmth, almost every other member of the New Zealand camp made it a point to shake hands with the Caribbean star for his brilliant efforts.

Almost every member of the New Zealand camp made it a point to shake hands with Carlos Brathwaite.

A fitting tribute to a superb knock.  #SpiritOfCricket | #CWC19 pic.twitter.com/O8NMDL8VNQ

The win saw New Zealand remain unbeaten in the 2019 World Cup, while West Indies currently have just one win from six games they have played so far.

The Williamson-led side will next lock horns with Pakistan on June 26 while Jason Holder's team will face India a day later.