After England were handed the ICC World Cup 2019 trophy for superior boundary count, many cricketers and fans had criticised the ICC's tie-breaker rule. 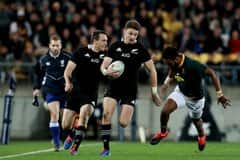 The International Cricket Council has been receiving flakes ever since England were awarded the winners of the recently-concluded ICC World Cup on the basis of more number of boundaries scored than New Zealand in the final of the marquee event at iconic Lord's Cricket Ground on July 14.

The New Zealanders have been trolling the global cricket governing body for their weird rules over the last few days and the latest entry in this race is All Blacks, the national rugby team.

After settling to a 16-16 draw in their Freedom Cup clash against South Africa's Springbooks in Wellington on Saturday, the All Blacks took to their official Twitter handle and took a cheeky dig at the ICC saying that there wasn’t any count back on the boundaries.

"No count back on boundaries in Wellington. It's a draw. Thanks for an epic Test," the New Zealand rugby team tweeted.

No count back on boundaries in Wellington. It's a draw. Thanks for an epic Test @Springboks.#NZLvRSA #BACKBLACK pic.twitter.com/iJKkskeELf

For the first time in the history of the World Cup, the summit showdown of the cricket's extravaganza went to the Super-Over after the two teams finished tied at 241 in their stipulated 50 overs.

The Eoin Morgan-led side posted 15 runs in the first-ever Super-Over in a World Cup final clash before New Zealand also finished on 15. England eventually lifted their maiden trophy at the mega event on the basis of the more boundaries scored than New Zealand in the final count.

After England were handed the trophy for superior boundary count, many cricketers and fans had criticised the ICC's tie-breaker rule.

While Indian vice-captain Rohit Sharma insisted that some rules in the Indian cricket need a serious look, legendary batsman Sachin Tendulkar suggested an alternative rule to decide the winner following a tiew in the Super Over.

"Some rules in cricket definitely needs a serious look in," Sharma had written.

Tendulkar, on the other hand, said that there should be another Super Over to decide the winner instead of considering the number of boundaries scored by both teams.