Neesham's heroics came after Martin Guptill (138), Kane Williamson (76) and Ross Taylor (54) made significant contributions with the bat to set a respectable 372-run target for Sri Lanka to chase. 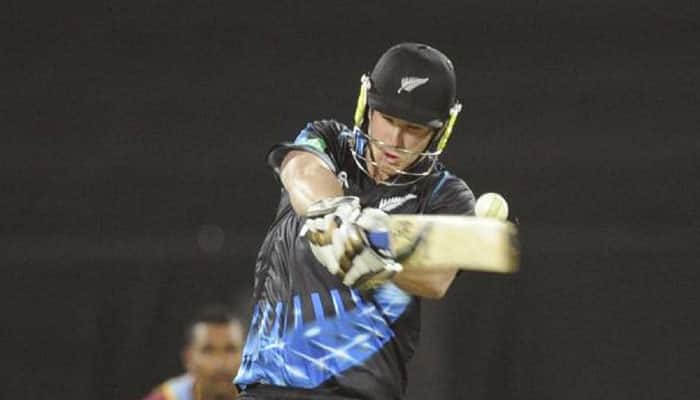 New Zealand all-rounder Jimmy Neesham, who made it to New Zealand's Playing XI for the first time in over 17 months, had a dream return to the international cricket as he slammed incredible 34 runs in an over during his side's first ODI against Sri Lanka at Bay Oval on Thursday.

The 28-year-old smashed five sixes, a two and a single in the penultimate over from medium-pace bowler Thisara Perera as he narrowly missed out on the fastest-ever half-century in the ODI format.

Neesham finished with 47 not out from 13 balls to guide New Zealand to the score of 371-1--the country's highest-ever ODI score of all time--in their stipulated 50 overs, stuff.co.nz reported.

The New Zealand all-rounder first sent the two balls from Perera smoking over mid-wicket before his third ball also went straight back down the ground for another six.

Neesham then once again pulled back one six by booming over mid-wicket before he scored two and another six runs off last two deliveries from Perera's over.

He also had a great chance to snap the long-standing record for most runs in an international over, that is, 36 when he had managed to score 33 runs from five balls. However, he failed to achieve the same as went for a single in the last delivery of the penultimate over to finish with 34 runs.

Neesham's heroics came after Martin Guptill (138), Kane Williamson (76) and Ross Taylor (54) made significant contributions with the bat to set a respectable 372-run target for Sri Lanka to chase.