Chasing a target of 139 to win, Nigeria slipped to 87 for six at one point, before man of the match Peter Aho scored a priceless 21 not out to see them home. 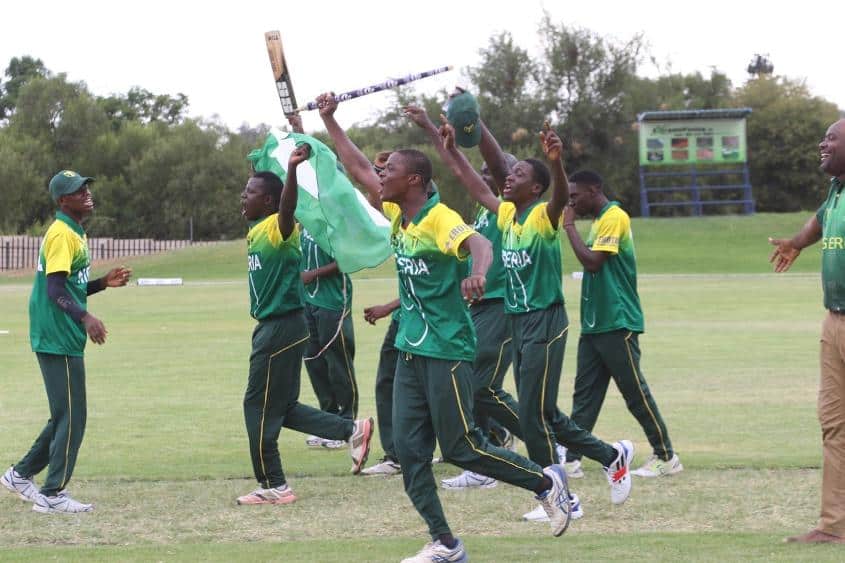 Nigeria secured a dramatic, first-ever spot in the ICC Under-19 World Cup in 2020, after they beat Sierra Leone by two wickets, on the final day of the Africa qualifying tournament in Namibia.

Chasing a target of 139 to win, Nigeria endured a nervy chase, slipping to 87 for six at one point, before man of the match Peter Aho scored a priceless 21 not out to see them home. The entire squad rushed onto the field in jubilation, as they confirmed their seat at their first-ever global tournament.

Aho had also taken two wickets earlier, when Sierra Leone posted 138 all out at Affies Park in Windhoek.

On the adjacent field, Namibia had posted a massive victory over Kenya, so Nigeria simply had to win.

Sierra Leone provided them with plenty of challenges, as Haroun Kamara's 58 from 60 balls propelled his side to a testing target. John Bangura chipped in with hearty 21, and as Sierra Leone refused to go quietly.

Osman Sankoh's late 24 also lifted the tempo, and the previously unheralded Abdulrahman Jimoh took two quick wickets for Nigeria the end, to stop the target getting any bigger.

In response, Nigeria endured a tumultuous time of it, not aided by a gathering storm. Isaac Danladi's responsible 25 was crucial, while Miracle Ikaige also lent a hand with a vital 22. But the wickets kept on tumbling, and the pressure kept on mounting.

Aho's nerveless intervention, mixed with occasional aggression, whittled down the target, and Nigeria were helped over the line by the cheering Ugandan squad. Namibia, on the other hand, were understandably cheering on Sierra Leone, having completed a 198-run drubbing of Kenya.

Skipper Divan la Cock was again in the runs, with 88 from 102 balls, and Jan-Izak de Villiers added a steady 55, as Namibia piled on the runs. Ramon Wilmot had set them on their way with a blitzkrieg 46 from just 31 balls, clubbing three sixes in the process.

The hosts eventually ended on 294 for five, as they finished the tournament like a freight train. They rolled Kenya over for 96, with Mauritius Ngupita yet again in the wickets. His three for 15 supplemented De Villiers' burst upfront, as Namibia rushed through the East Africans.

In the final game of the tournament, Uganda's Zephania Arinaitwe clattered a 40-ball 102, to blaze his side to an eight-wicket victory. He made light work of a target, after Tanzania had been bowled out for 144.

Ashish Shah scored 40 and Aahil Jasani 28, as Tanzania tried to mount a challenging total. Skipper Frank Akankwasa and Juma Miyagi took three wickets apiece, as Uganda finished off their tournament in some style.

The stage was then set for Arinaitwe to hammer nine sixes and six fours in his astonishing innings. He rushed to the total of 145 in just 12.2 overs, to demolish Tanzania, and finish off a dramatic week in Windhoek with quite a flourish.