Besides him, Lasith Malinga ended with the figures of three for 39 in 6.4 overs, while Isuru Udana and Thisara Perera also chipped in with a wicket each. 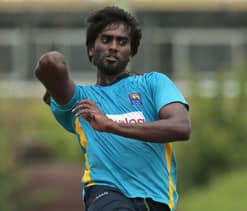 Nuwan Pradeep was on Tuesday adjudged Man of the Match after he shone with the ball to help Sri Lanka beat Afghanistan by 34 runs via Duckworth Lewis (D/L) method in their second match of the 2019 International Cricket Council (ICC) World Cup at Sophia Gardens in Cardiff.

Defending the revised target of 187 runs in 41 overs in a rain-hit thriller, Pradeep ran through the Afghanistan batting line-up to help Sri Lanka eventually bundle the Gulbadin Naib-led side out for 152 runs in 32.4 overs. He finished with the brilliant figures of four for 31 in nine overs he bowled during the match.

Besides him, Lasith Malinga ended with the figures of three for 39 in 6.4 overs, while Isuru Udana and Thisara Perera also chipped in with a wicket each.

Najibullah Zadran was the highest scorer for Afghanistan with his knock of 43 runs off 56 balls.

Put in to bat first, Kusal Perera (78) and skipper Dimuth Karunaratne (30) had earlier provided their side with a perfect start by stitching a crucial 92-run stand for the opening wicket. However, the Sri Lankan team failed to build partnership following the openers' dismissal and collapsed to 201 all out in 36.5 overs.

Notably, the clash was interrupted by rain midway through the Sri Lanka innings before being resumed and reduced to 41 overs per side.

Nuwan Pradeep has now bagged a total of 42 wickets in 35 ODIs he played for Sri Lanka at an economy rate of 6.10.