Peter Handscomb not ready to comprise with bat for glovework

Handscomb was named as wicketkeeper at the expense of vice-captain Alex Carey in the Australian squad for the first T20I against India. 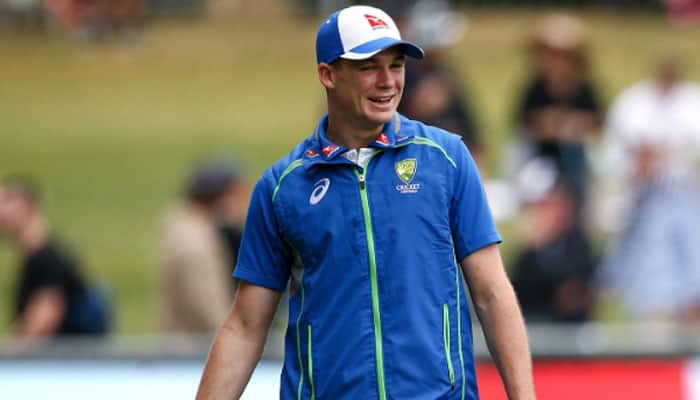 Australian batsman Peter Handscomb, who got a surprise maiden T20I call-up in the opening match against India in Visakhapatnam, is though determined to make it to the country's World Cup squad as wicketkeeper-batsman, he is well aware that donning the gloves would not comprise with his batting.

The 27-year-old was named as wicketkeeper at the expense of vice-captain Alex Carey in the Australian squad for the first T20I, which India went on to lose by three wickets at ACA-VDCA Cricket Stadium in Visakhapatnam.

Though Handscomb made a decent work with gloves, he failed to click with the bat as he not only went back to the pavilion after scoring just 13 runs but also led to D'Arcy Short (37) run out following a mix-up.

However, Handcomb is willing to work on his fitness in order to balance wicketkeeping and batting in the middle.

"I just need to make sure I'm fit enough and strong enough that if we keep first in a 50-over game I can still go out there and bat at four or five and make sure I'm still running hard between the wickets and doing everything right by the team," cricket.com.au quoted Handscomb as saying.

With Alex Carey expected to take the gloves in the upcoming five-match ODI series against India, Handscomb's chances of making it to Australia's World Cup squad as the wicketkeeper is unlikely.

However, should Australian selectors deem it necessary to take two wicketkeepers in the showpiece 50-over event, Handcomb is most likely to be their first choice owing to his impressive show for Victoria in the JLT One-Day Cup.

Handscomb stressed that his glovework has improved to all new level after working with assistant coach and World Cup-winning wicketkeeper Brad Haddin during limited-overs tours to India and New Zealand in 2017.

"Hadds is great. We actually did a bit of work together, a couple of years ago – maybe a year and a half ago," Handscomb said.

"That put me on the right path with my keeping. We found a little routine that I can do at training or before a game that just gets me going, gets me ready to keep, whether I've been training a lot or I haven't been," he signed off.