"In the second innings, when I walked in, Waugh said, 'Rahul, number six in this innings, what is it in the next innings? Number 12?" Dravid revealed while speaking at the Go Sports Athletes' Conclave in Bengaluru. 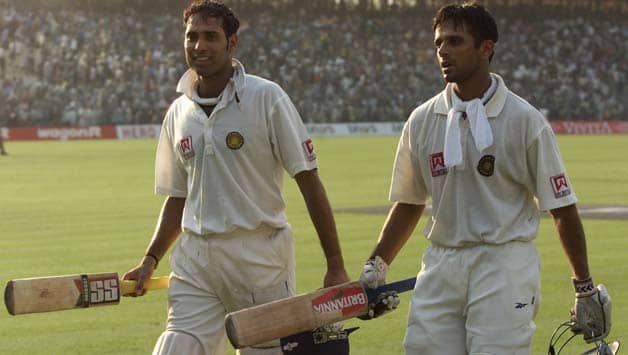 VVS Laxman (left) and Rahul Dravid during the 2001 Kolkata Test against Australia at the Eden Gardens
Share:
Written By:

New Delhi: After his memorable debut in 1996, what took Rahul Dravid's iconic career to dizzying heights was his memorable knock against Australia in the 2001 Kolkata Test at Eden Gardens, in which India beat the visitors following on - thanks to Dravid's 180 and Laxman's 281 as they batted out a whole day to put the hosts back in the driver's seat. But there was something said to Dravid by Australia skipper Steve Waugh, which spurred him on to play one of the best Test innings.

Rahul had a forgettable outing in the first innings of the match and was demoted to No. 6 in the second after Australia enforced the follow-on.

"In the second innings, when I walked in, Steve Waugh said, 'Rahul, number six in this innings, what is it in the next innings? Number 12?" Dravid revealed while speaking at the Go Sports Athletes' Conclave in Bengaluru.

"In the first three days of the Test match, we were sort of completely beaten. Personally as well, my form was not good. I hadn't scored runs in Bombay. I hadn't hit runs in the first innings. In fact, I was demoted to number six in the batting order," the 44-year-old, who quit the game in March 2012, recalled.

Dravid then went on to explain his "one ball" plan that helped him construct his innings in Laxman's company.

"It was quite funny because I had reached the depths, I felt so low. I was not in a position to think about the past or about the future. And in cricket, it is just about focusing on one ball at a time. I thought 'let me see how many one-balls I can play at a time.' I was thinking 'one more, one more'," Dravid told the audience.

The duo's partnership helped India take a 373-run lead after being behind the Aussies by 274 runs at the end of first two innings of the match. Harbhajan Singh then turned the screws on the visitors as India bowled out Australia for 212 to level the three-match series 1-1.

Captained by Sourav Ganguly, India won the third Test to clinch the Gavaskar-Border Trophy and deny Waugh his dream of conquering what he famously termed before the tour as 'final frontier'.

In shocking video, cricketer in Kerala dies on field from cardiac arrest